After 25 years working in the field of forensic science and over two decades of executive experience as a laboratory director, Kathleen Corrado has been named director of the Forensic and National Security Science Institute (FNSSI) in the College of Arts and Sciences (A&S). 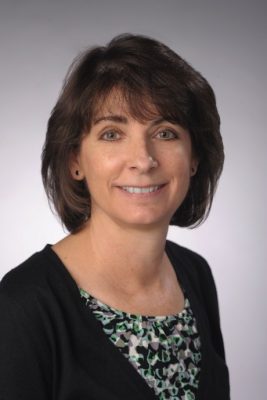 “I truly enjoyed the day-to-day bench work and performing research that would someday lead to gene therapies for such devastating diseases, but to me, the direct application of that seemed a long way away,” Corrado says.

While commonplace today, forensic DNA analysis was an emerging field when Corrado started in the mid-1990s and she saw its potential to have a more immediate impact on people’s lives. A desire to help bring a timely resolution to urgent problems led her to shift professional gears and enter the field of forensic DNA analysis.

“The true power of applying science to solve crime is the effect it has on the entire justice system and our society as a whole,” she says. “We often hear accounts of criminals being apprehended through DNA testing or fingerprint comparison and that is important, but just as important are the people cleared of wrongdoing or never being arrested based on the application of the same testing.”

A Wealth of Experience

Corrado joined the Texas Department of Public Safety in 1996, specializing in crime scene investigation, biological fluid identification and various forms of DNA analysis. In 1999, Corrado, a New Jersey native, accepted a position as DNA Technical Leader for the newly opened Onondaga County Center for Forensic Sciences (CFS). While DNA drew Corrado into the field, she quickly moved into the role of Director of Laboratories at the CFS in 2000. For over 20 years she managed a full-service laboratory that provided a broad range of forensic services beyond DNA analysis, including firearms, fingerprint analysis, drug chemistry and digital evidence.

In addition to her service to the local community, Corrado served as the chair of the New York Crime Laboratory Advisory Committee, was appointed to three terms on the New York State Forensic Science Commission, served as the chair of the State of Virginia Scientific Advisory Committee, and was as an elected board member of the American Society of Crime Laboratory Directors/Laboratory Accreditation Board (ASCLD/LAB). She also has served on the Scientific Area Committee and the Biological Data and Interpretation Subcommittee of the National Institute of Science and Technology’s Organization of Scientific Area Committees for Forensic Science (OSAC) and currently serves as a member of the ANAB Forensic Accreditation Council, which is the longest established provider of accreditation based on ISO standards for forensic agencies in the United States.

According to Corrado, as technology has evolved, so has the specificity and sensitivity of DNA analysis, and forensic scientists can now help solve crimes with less evidence than ever before.

“The increased sensitivity of DNA testing combined with our ability to determine the statistical significance of the evidence and effective use of databases are game-changers,” she notes. “When I first started, DNA evidence was mainly used in court after a suspect had already been identified. Now, ever-decreasing amounts of DNA are regularly being used to identify a suspect.”

One example was a cold case that her laboratory solved through DNA analysis involving a 12-year-old who had been assaulted on her way to school in 1997. The evidence was initially submitted to a private laboratory that was not able to generate a full DNA profile. Corrado retested the sample in 2002 when CFS’s DNA testing had come online with a more sensitive technique. She was able to generate a profile that was then uploaded to the New York State DNA database for potential matches. Over the next 15 years, the DNA was searched against the database without any matches. Then, in 2018, the evidence from the assault was finally matched to an offender who had been recently added the state DNA databank.

“This case is one that sticks with me as I hope that we were able to give some closure to the survivor after all of those years,” Corrado says. “This is what crime labs and forensic scientists do every day, on all types of cases with the goal of providing unbiased and accurate information to assist in the criminal justice process and to provide closure to crime victims and their families.”

Staying Ahead of the Curve

A key component to maintaining the Syracuse forensics program’s success is staying ahead of the technological curve, Corrado notes.

She points out that the increasing reliance on digital information is changing the field. “The quantity and complexity of personal data that can be acquired from computers, cell phones, tablets, gaming systems, medical devices and even automobiles is truly staggering,” she says. “Similarly, the field of forensic DNA is also moving towards increasing data sets to include large-scale genetic data such as personal appearance, ancestry, genetic biomes and eventually the sequencing of entire genomes.”

The acquisition of such large data sets is outpacing the ability to determine the best way for it to be stored and analyzed. Analysis of these large data sets requires methods to quickly and efficiently parse out relevant information and requires sophisticated algorithms and machine learning to extract valuable information. Protecting the integrity and security of this data is also a fundamental issue that Corrado says Syracuse University can be at the forefront of solving, through potential collaborations between FNSSI and other colleges at the University. Through these partnerships, Syracuse can be a leader in addressing policy and legal issues concerning to the privacy of digital information.

Corrado says another major shift on the horizon of forensics is the rise of computational analysis, creating a demand for forensic scientists that have strong skills in statistics, computer software and data analytics. According to Corrado, pattern evidence disciplines such as fingerprint analysis and firearms identification currently rely heavily on the expertise of the examiner to determine if two samples originate from the same source or from different sources. The field is moving toward statistical approaches to quantify the levels of similarity between, for example, two fingerprints or the marks on two fired cartridge cases to provide a weight or significance of the association. She says the use of advanced statistical models and algorithms is the future of forensics, and are areas that FNSSI is in a good position to further expand.

A&S Dean Karin Ruhlandt notes that Corrado’s extensive experience and eye on the future bring a well-rounded vision to FNSSI.

“Kathleen Corrado combines the scientific mindset with human compassion and empathy — traits essential to all forensic scientists as they seek to bring answers to grieving families and communities. Thanks to the leadership of the previous director, James Hewett, FNSSI is well-regarded nationally, and I look forward to Kathleen enhancing student opportunities in forensic sciences, such as DNA and drug analysis, and expand current offerings to the areas of statistical and computational analysis,” says Ruhlandt.

Corrado will now help mold the world’s future forensic scientists in her role as director of FNSSI. The nationally accredited program features a rigorous curriculum and valuable hands-on exposure to the field, including classes taught by active scientific experts. The program also has institutional partnerships with several operational forensic laboratories including with the Onondaga County Center for Forensic Sciences, the New York City Office of the Chief Medical Examiner, the FBI and more. Over 90% of FNSSI graduates now work in an area related to their field of study.

Corrado plans to build on the program’s already strong partnerships, increasing research collaborations with these and other laboratories as well as with other departments within the University. In forensic science, hands-on experiential learning is key, and developing a larger network of collaborations, both internally and externally, will reinforce FNSSI as one the nation’s premier destinations for students.

“The FNSSI program excels in both teaching and research, and has consistently recognized and embraced the changing dynamics in the field,” Corrado says. “I am looking forward to joining a great team and being a part of helping to educate our future forensic scientists.”

Find out more about FNSSI.