Share
BioInspiredCollege of Arts and SciencesDepartment of BiologyfacultyfundinggrantsNational Institutes of Healthresearch

The human body is made up of trillions of cells. Within each cell are proteins which help to maintain the structure, function and regulation of the body’s tissues and organs. When cells are under stress, as in response to heat or toxins, certain proteins within the cell condense into liquid-like droplets called condensates. These droplets can be thought of as a form of quality control allowing the cell to minimize the effects of the stress condition. 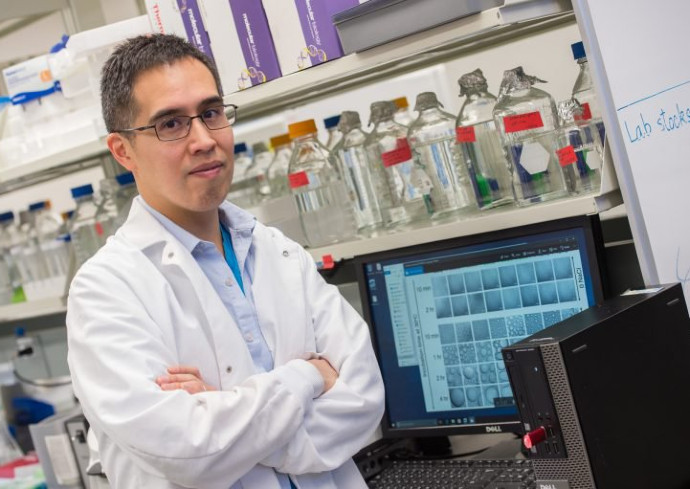 Carlos Castañeda (Please note, this image was taken prior to the COVID-19 pandemic and does not reflect current public health guidelines.)

Cases of abnormal condensate formation or persistence have recently been linked to neurodegenerative diseases like ALS (Lou Gehrig’s disease) and cancer. Thanks to a $1.5 million grant from the National Institutes of Health (NIH), Carlos Castañeda, assistant professor of biology and chemistry, and his team will investigate the regulation and dysregulation of condensates using biophysical and cell biology approaches. This research may lead to determining what causes diseases like ALS.

To function properly, cells depend on proteins to do their jobs. When a protein mutates, it can cause adverse medical conditions. The protein Castañeda and his team are studying is called Ubiquilin-2 (UBQLN2), which is part of many protein quality control pathways in the cell. Improper functioning of UBQLN2 can result in protein clumping or aggregation, which can potentially cause cells in the nervous system to die. These abnormal protein aggregates are markers for neurological diseases like ALS.

Mutations in UBQLN2 are known to be linked to ALS. Castañeda and his team, including Heidi Hehnly, assistant professor of biology, are hoping to learn how and if these ALS-linked mutations disrupt assembly and disassembly of UBQLN2-containing condensates in cells, as well as what regulates the liquidity of UBQLN2 condensates. By understanding the molecular mechanisms behind UBQLN2 condensates, the team could discover more about what leads to diseases like ALS— and potential ways to cure them.

The grant will also allow the team to determine how UBQLN2’s interactions with other proteins involved in protein quality control influence how UBQLN2 condensates form and dissolve. The team recently discovered that ubiquitin, a similar-sounding but different protein, is important for dissolving UBQLN2 condensates. Specifically, the team suspects that ubiquitin helps UBQLN2 extract and shuttle ubiquitinated proteins out of condensates and transport them elsewhere in the cell to be broken down. This may uncover a new ability for UBQLN2 to selectively extract disease-associated irregular or dysfunctional proteins from condensates.

Castañeda’s team will test this hypothesis by reconstituting the extraction process in test tubes and by developing live-imaging methods to monitor it in cells. In any case, these experiments could uncover disease mechanisms associated with ALS and other neurodegenerative disorders, while also providing a therapeutic avenue to target specific proteins found in condensates for degradation.

“We’re at the forefront of this field, as we’re looking at a unique system whose condensates are modulated by ubiquitin, a tag that targets proteins for myriad pathways including protein degradation, cell cycle control and DNA repair,” says Castañeda. “Studying how UBQLN2 condensates assemble and disassemble is likely to be applicable to how many other condensate systems in the cell work.”

Additional collaborators on the grant include Beverly Petterson Bishop Professor of Neuroscience and Professor of biology Sandra Hewett and Tanja Mittag, associate professor of structural biology at St. Jude Children’s Research Hospital. NIH is the largest public funder of biomedical research in the world, investing more than $32 billion a year to enhance life, and reduce illness and disability. NIH funded research has led to breakthroughs and new treatments, helping people live longer, healthier lives, and building the research foundation that drives discovery.