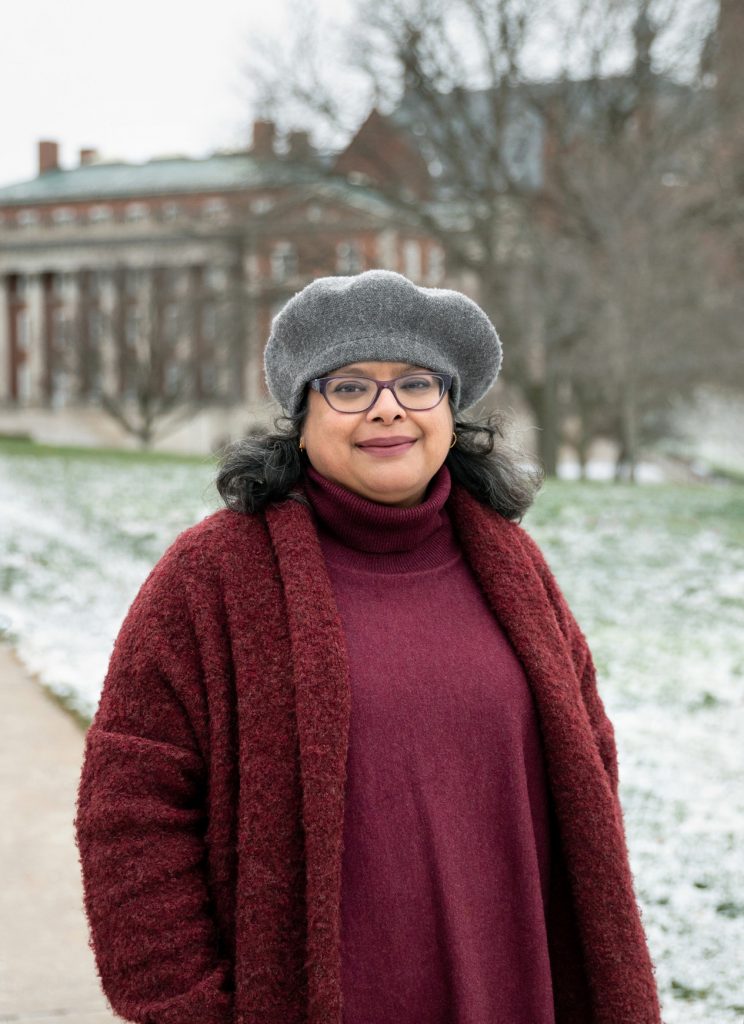 Associate professor of art history Romita Ray specializes in the art and architecture of the British Empire in India. With assistance from the University’s Proposal Support Services and internal grant funding, Ray is doing research she feels an intimate personal connection with, which she says sets her up for an intellectual adventure. “I’ve always felt when you’re most honest with yourself and your thoughts, which is actually a deeply personal engagement, I think that’s when your writing is the sharpest and your research is the most incisive.”

Originally from Kolkata, India, Ray’s latest interdisciplinary research has centered on a botanical novelty and a prized beverage that intersects with her personal family history: tea. While the British introduced the China variety of tea to India, they soon found out about an indigenous species of tea growing in northeast India. Realizing the commercial potential of growing tea in India, they industrialized the plant, and their colonial influence is evident in the industry even today.

Ray is taking a highly interdisciplinary approach to a historical study of tea. She sees tea as an intersection between plants, science, animals, and art and architecture. Several generations of Ray’s family were tea planters, and her great-grandfather was the founder chairman of the Indian Tea Planters Association at a time when tea was an irrefutably British imperial industry.

“So it’s very interesting to return to that history as more of a departure point, because it gives me a level of comfort. I’m intimately familiar with tea-growing landscapes,” she explains.

Even with her familiarity with how tea is grown, processed, exported and used, as a whole, India operates with a different set of parameters and organizational structures.

“You learn a lot of patience in the process. It’s a slow but sustained project,” says Ray. India operates on networks of trust and these relationships need time to develop, she says.

In 2016, Ray won a National Endowment for the Humanities (NEH) fellowship, that enabled her to travel to India, the United Kingdom and Sri Lanka. “I was very fortunate to receive one of these nationally competitive fellowships, which really helped push the research forward,” she says. The yearlong grant enabled Ray to gain valuable insight into the industry and its networks by developing relationships over time.

For Ray, the history of Indian tea is essentially about taming the tea plant. “I can’t imagine writing a book about tea without understanding the plant itself,” she says.

Her research has taken her down surprising avenues and unexpected turns, everywhere from forest divisions to natural history collections. She has consulted with plant scientists, tea planters, a tiger preservationist and botanical artists. She has gathered material from the descendants of colonial planters and learned to pluck tea.

Her goal is to present these connected histories of art, science and living histories to shape the most interesting story she can tell. “It has taken me through many different journeys I would say,” says Ray. “The best part about this project is that I’m having fun, and I never get bored with it.”

Her international research brought Ray to archives, herbaria, libraries, private collections, museums, research institutes and tea plantations. “But that was only the beginning,” she says. “I just saw this entire world open up before me.”

Ray’s research brought her into contact with botanists, tea industry stalwarts, historians of science, and tea pluckers who harvest the leaves.

“My circle of life and thinking widened, and that’s what makes this project so fulfilling,” she says. “Turning to tea experts who are not necessarily academic has enriched my work far more than I had envisioned.”

One outside expert connection was a School of Architecture alumnus Todd Rubin. Rubin owns the Republic of Tea company. “There’s a lot of tea talk that happens between us,” says Ray. “Syracuse University has given me a much larger network who are connected to the American tea scene.”

On Jan. 21, 2021, Ray and Rubin will join College of Arts and Sciences’ alumnus Tim Takacs, co-owner of Marulin, a London-based tea company, for a virtual tea program for the SU Alumni Association. And in June 2021, Rubin will be co-sponsoring a tea conference that Ray is co-organizing with Richard Coulton (Queen Mary University of London) and Jordan Goodman (University College London), at the Linnean Society, the world’s oldest active biological society in London.

Since returning to the United States, Ray was awarded a 2020 Collaboration for Unprecedented Success and Excellence (CUSE) Grant and has begun working on her book tentatively titled, “Leafy Wonders: Art, Aesthetics, and the Science of Tea in Colonial and Modern India.”

Currently on research sabbatical, Ray is approaching the subject through the lens of an art historian.

“How to tell a multi-faceted story about a plant and the people, landscapes and wild animals associated with it, is bound to be challenging. So I’m relishing every minute of it right now,” says Ray.

While on leave, Ray is practicing botanical illustration. “It makes me understand what I am writing about through practice,” says Ray. “I’m grateful to Syracuse University for giving me the year to think and write.”