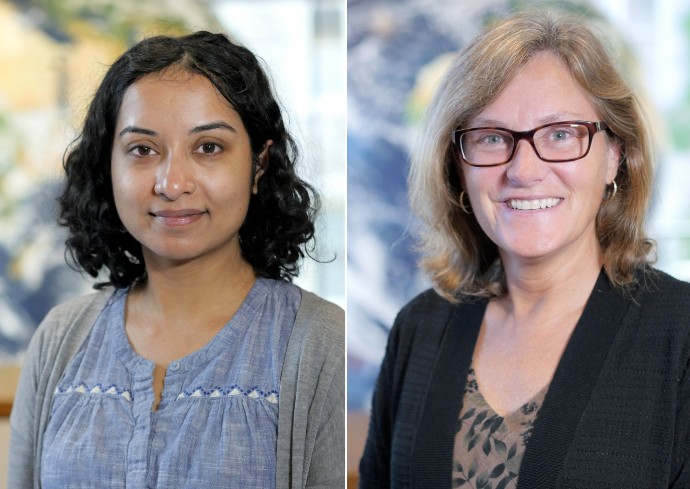 Tiny bubbles of ancient air trapped deep beneath the ice in Antarctica contain important information about our atmosphere. By drilling into the ice, scientists have analyzed these bubbles and determined that carbon dioxide (CO2) levels on Earth today are higher now than at any point in the last three million years. As human activity like the burning of fossil fuels increase concentrations of greenhouse gases, the sun’s heat is trapped within our atmosphere, causing it to warm. To determine how atmospheric heating will affect Earth’s future climate, scientists are retracing the planet’s past—back to a time when temperatures and levels of CO2 were even higher than they are today.

Two faculty members from the Department of Earth and Environmental Sciences (EES) recently contributed to the review paper “Past climates inform our future,” by lead author Jessica Tierney of the University of Arizona’s Department of Geosciences. The article, published in the leading journal Science, suggests that researchers using numerical models to predict future climate change should include simulations of geological data from the Earth’s distant past in their evaluations. Included on the international team of scientists contributing to paper were EES’ Thonis Family Assistant Professor Tripti Bhattacharya and Professor Linda Ivany.

Climate scientists often evaluate their models with data from historical weather records that date back one or two centuries, such as sea surface temperatures, wind speeds and other parameters. The model’s algorithms are then adjusted and tuned until their predictions mesh with the observed climate records. If a computer simulation produces a historically accurate climate based on the observations made during that time, it is considered fit to predict future climate with reasonable accuracy.

“We find that many models perform very well with historic climates (climate fluctuations recorded over the last few millennia), but not so well with climates from the Earth’s more distant geological past,” Tierney says. “If your model can simulate past climates accurately, it likely will do a much better job at getting future scenarios right.”

Paleoclimate research explores a vastly broader range of climatic conditions dating back millions of years. These periods in Earth’s past span a large range of temperatures and precipitation patterns and consequently can inform climate models in ways recent historic data cannot.

Research by Bhattacharya and Ivany specifically deals with determining how temperatures and regional patterns of rainfall responded to global climate change millions of years ago.

According to Bhattacharya, current climate models predict very different trajectories of warming and rainfall change in particular regions. This is because regional climate changes often depend on complex variables, including the way clouds respond to climate change, or the way the land surface or vegetation responds to warming. By using geological data from past climate states as a guide, Bhattacharya says scientists can enhance their understanding of how regional rainfall and temperature will respond to global climate change.

“New techniques for looking at the geologic record offer additional variables to examine, or better precision on climate modeling estimates,” she says. By using sophisticated geochemistry to examine organic matter in fossil leaf wax dating back millions of years, Bhattacharya can closely pinpoint regional precipitation at that time.

Growth banding in fossil mollusk shells can reveal the mean and seasonal range of temperature in a region tens of millions of years ago.

Similarly, Ivany uses high-resolution studies of the chemistry of growth banding in fossil mollusk shells to reveal the mean and seasonal range of temperature in a region tens of millions of years ago. “Geoscientists have a number of approaches for estimating mean temperature in the distant past, but seasonality is especially difficult to constrain because of the need for weekly to monthly resolution records,” says Ivany. “Very few archives allow for that in the deep-time record.”

Amazingly, weather data teased out from fossil leaf wax and ancient mollusk shells can help determine which climate models most accurately reproduce the past, and hence are most likely to accurately capture the future.

Regional patterns in rainfall and temperature seasonality are predicted by climate models and expected to change significantly with global warming. However, different models can yield surprisingly different predictions in a warming world. Choosing a model that best reproduces the geologic data, such as those produced by Bhattacharya and Ivany, helps scientists get that much closer to understanding what to expect in our future.

While there is no debate in the climate science community about human fossil fuel consumption pushing the Earth toward a warmer state for which there is no historical precedent, different models generate varying predictions. Some forecast an increase as large as six degrees Celsius (11 degrees Fahrenheit) by the end of the century. Tierney says that while Earth’s atmosphere has experienced carbon dioxide concentrations much higher than today’s level of about 400 parts per million, there is no time in the geological record that matches the speed at which humans are contributing to greenhouse gas emissions.

The authors discuss climate changes during the Cretaceous period, about 90 million years ago, when dinosaurs still ruled the Earth. That period shows that the climate can get even warmer, a scenario that Tierney described as “even scarier,” with carbon dioxide levels up to 2,000 parts per million and the oceans as warm as a bathtub.

“The key is CO2,” Tierney says. “Whenever we see evidence of warm climate in the geologic record, CO2 is high as well.”

To ensure future climate models provide accurate scenarios as policymakers, scientists and citizens at large plan for a warmer future, the authors urge the climate community to test models on paleoclimates early on, while the models are being developed, rather than afterward.

For a full list of authors and funding information, see the paper, “Past climates inform our future.”

Note: Excerpts of this story are adapted from a press release from the University of Arizona.