Syracuse Biologists Publish Research on the Persistence of Mutualisms in ‘Science’ 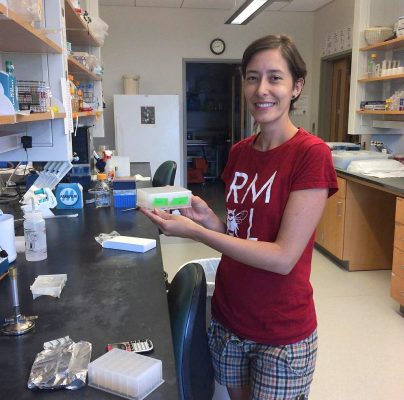 Postdoctoral researcher Mayra Vidal with a tray containing a harvested community of yeast.

The sign of a healthy personal relationship is one that is equally mutual—where you get out just as much as you put in. Nature has its own version of a healthy relationship. Known as mutualisms, they are interactions between species that are mutually beneficial for each species.

One example is the interaction between plants and pollinators, where your apple trees are pollinated and the honeybee gets nectar as a food reward. But what makes these mutualisms persist in nature? If rewards like nectar are offered freely, does this make mutualisms more susceptible to other organisms that take those rewards without providing a service in return?

A team of researchers from the College of Arts and Sciences (A&S), including co-principal investigators Kari Segraves, professor of biology, and David Althoff, associate professor of biology, along with postdoctoral researcher Mayra Vidal, former research assistant professor David Rivers and Sheng Wang G’20, recently researched that question and the results were published in the Oct. 16 edition of the prestigious journal “Science.”

They investigated the abilities of simple versus diverse communities of mutualists, comparing how each deal with cheaters. Cheaters are species that steal the benefits of the mutualism without providing anything in return. An example of one of nature’s cheaters is nectar robbers. Nectar-robbing bees chew through the side of flowers to feed on nectar without coming into contact with the flower parts that would result in pollination.

The research team wanted to test if having multiple mutualists with similar roles allows the community as a whole to persist when cheaters take away the mutualists’ resources. The idea was to examine whether having more species involved in a mutualism, such as many pollinator species interacting with many different plant species, made the mutualism less susceptible to the negative effects of cheaters. They also wanted to analyze whether increasing the number of mutualist species allowed all the mutualists to persist or if competition would whittle down the number of mutualist species over time. In essence, the team wanted to understand the forces governing large networks of mutualists that occur in nature. 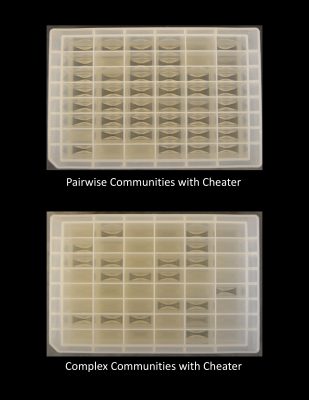 Wells of yeast in the top tray with only two mutualist species and a cheater showed higher extinction (indicated by the many dark wells). Yeast strains of complex communities and a cheater in the bottom tray showed better growth and less extinction.

The researchers assembled communities of yeast that differed both in the number of species and the presence of cheaters. They found that communities with higher numbers of mutualist species were better able to withstand the negative effects of cheaters because there were multiple species of mutualists performing the same task. If one species was lost from the community due to competing with a cheater, there were other species around to perform the task, showing that the presence of more species in a community can lessen the negative effects of cheaters.

Their results highlight the importance of having multiple mutualist species that provide similar resources or services, essentially creating a backup in case one species goes extinct. Segraves compares this phenomenon to the relationship between retailers and consumers. Communities typically have multiple banks, grocery stores, restaurants and hospitals to ensure that there are always goods and services available should something happen to one company or facility, or, as with COVID-19 today, grocery stores now have multiple suppliers to fend off shortages.

The team’s research was funded by a $710,000, three-year grant from the National Science Foundation.