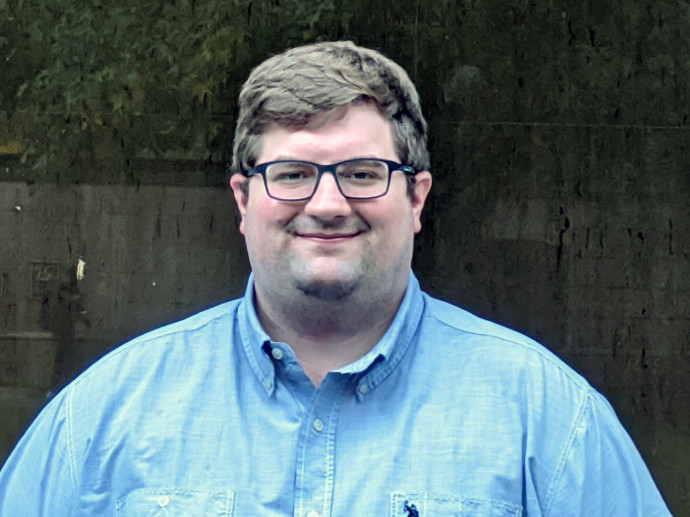 After completing a master’s degree from the University of Akron in physics, Ph.D. candidate Maxx Swoger attended a seminar hosted by Alison Patteson, assistant professor of physics at Syracuse University. “Originally and very broadly, I wanted to study soft matter physics or biophysics. And to be perfectly honest with you, I think this is one of the best places in the country to do that,” says Swoger. “The collaboration both within the physics department and the University allows students to approach the systems we’re studying with a variety of techniques. This is something I really liked about Syracuse when deciding which school to attend for my Ph.D.”

Patteson’s lab is affiliated with the University’s BioInspired Institute, which supports interdisciplinary study related to smart materials that can be used in medicine and other applications. Swoger had previously worked in an adjacent field, primarily on theory, so he was not accustomed to lab work. “I thought the work Professor Patteson was doing was really cool so I approached her,” says Swoger.

As a graduate assistant in the Patteson Lab, Swoger is involved in research centering on how cells interact with their environment and how physical forces shape life. Understanding the relationship of cells to their surroundings can help describe how cells are expected to move through the body. Swoger says scholarship in this area has mainly focused on surfaces that are strictly elastic, that work like springs.

“But in reality, the vast majority of your tissue is something called viscoelastic, which acts more like Silly Putty,” says Swoger. Examples include bodily structures like cartilage, ligaments, tendons and arteries.

Using an epifluorescence microscope and the confocal microscope at the next door Hehnly Biology Lab to make additional observations, Swoger says researchers look for proteins that are present when the cell interacts with its environment.

“Vimentin is part of the cell cytoskeleton, so you could consider it skeleton of the cell,” says Swoger. “What’s so interesting about it is that, when cells are moving, expression of this protein increases.” By forcing a cell into a two-micron wide space, researchers have observed vimentin acting like a seatbelt of sorts for the cell’s nucleus, surrounding it and protecting the enclosed genetic material as it passes through the narrow passage.

Swoger specializes in experiments with animal cells. His experiments include cultivating cells on substates where he can control mechanical properties like how rigid a substate is or whether it is elastic or viscoelastic. Swoger measures this by observing how vimentin is organized in the cell.

Swoger gauges interactions of the cell and substrate and evaluates proteins in locations where cells grab on to their underlying substrate, known as focal adhesions. “You can make different substrates for these cells to sit on that have varying stiffnesses, spread all across a physiologically relevant range, as the human body is stiffer or more pliable in different places,” he says.

This research has implications for all types of medical applications. “Say you have a disease or a cancer that up-regulates or down-regulates vimentin, it’s going to affect how your cells are able to move.” This can be important in predicting how healing might be affected.

Swoger says observations like this are an example of a shift in biophysics, physics and biology. “For a long time, cells were assumed to be acting based on chemical signals from their environment. Biophysicists challenged that notion by demonstrating that cells also have some physical interaction with the environment,” says Swoger. “This is the idea behind mechanosensing, the mechanism through which cells can feel their mechanical environment.”

Swoger says he’s excited to continue to do research that draw him into areas outside of physics.