At every moment you are surrounded by—and part of—countless networks. A social network can connect us to family, friends and information; an electric transmission network connects generators to customers; or an individual street can connect with networked highways across a continent.

“There are transportation networks, communications networks, social networks, power grids, biological networks–there are a lot of networks around us,” says Reza Zafarani, assistant professor of electrical engineering and computer science. 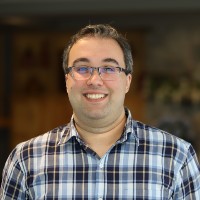 Most of Zafarani’s research deals with data. Massive amounts of data. But what he is really interested in is the intersection of networks, large-scale data and human behavior.

“Usually when you analyze large-scale data, you look at individual data points, you don’t look at interactions (in other words, networks) that much,” says Zafarani. “This is an area my research tries to target.”

Studying those interactions within networks can show for example, how misinformation or human sentiments can propagate.

“People sometimes put too much trust in the data they have, where they don’t really think about how that data was generated or how that data was collected (or sampled), or if there are any errors in data,” says Zafarani. “As in any scientific study, you want to be sure the findings are indeed correct.”

“You want to do contact tracing, and that in and of itself is a network, but you don’t really have the whole network of social interactions—you can’t trace everything,” says Zafarani. “You have a network but that network is uncertain. You need to have a measure that tells you, if you analyze this network and get this finding, this is how much you can trust this finding.”

Building on his previous research around the spread of fake news and misinformation on social media, Zafarani believes this project can also help show the reliability of social media network data sets.

“We are doing work on detecting fake news. There are a lot of problems when dealing with that kind of data because sometimes you are dealing with malicious entities, they change and evolve,” he says. The information you have is very limited. You have to make sure that what you derive from that network data is indeed correct.”

“It is very important that when you analyze these propagation paths of misinformation or fake news, to have some measure of validity on how complete your observations of these paths are,” Zafarani says. “In other words, are there other people spreading the fake news that I am not aware of? In turns out, this is a challenging problem to solve and the proposed research targets such problems.”

This work could also give insights into how networks can be used to detect the spread of cyberbullying and hate speech.

“There is a kind of group behavior that often occurs when you are looking at hate speech or similar phenomena,” says Zafarani.  “It is important to understand the network of hate speech posters.”

Zafarani says that being part of a department with both electrical engineering and computer science programs has been beneficial to his research. He has also been able to collaborate with Syracuse University colleagues across different colleges and departments.

“I hope this starts even more collaborations across departments,” says Zafarani. “As long as you have data that looks like a network, whether it’s in mathematics, biology, computer science or in engineering, you can use this kind of research.”