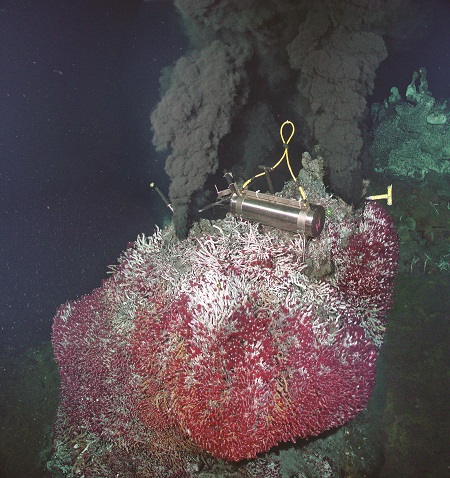 What appears to be black smoke from this hydrothermal vent on the Mid-Ocean Ridge is actually a mix of hot fluids and gases. Reactions with seawater construct chimney-like structures and provide nutrients for microbes. (Photo courtesy: Karson, J.A., D.S. Kelley, D.J. Fornari, M.J. Perfit, and T.M. Shank, “Discovering the Deep: A Photographic Atlas of the Seafloor and Oceanic Crust,” Cambridge University Press, 2015.)

Did you know that over 70 percent of the Earth’s volcanic activity happens on the seafloor along underwater mountain ranges called mid-ocean ridges (MOR)? Lava flows are fed by subsurface magma chambers that heat the rocks and emit large amounts of hydrogen gas from submarine geysers called hydrothermal vents. If the hydrogen were to escape into the oceans and atmosphere, it would participate in various chemical reactions that could harm the environment, like ocean acidification. Higher levels of ocean acidity make it more difficult for marine organisms, such as coral and some plankton, to form their shells and skeletons.

Luckily, much of the hydrogen is consumed by tiny living things called microbes before ever making its way out of hydrothermal vents into the sea.

Jeffrey Karson, the Jessie Page Heroy Professor of Earth Sciences in the College of Arts and Sciences, along with colleagues from Duke University and the Cary Institute of Ecosystem Studies conducted a preliminary investigation to estimate how much hydrogen is generated by various processes at Mid-Ocean Ridges and how much is consumed by microbes. Their research article, Abiotic hydrogen sources and sinks near the Mid-Ocean Ridge (MOR) with implications for the subseafloor biosphere, has been published in the journal “Proceedings of the National Academy of Sciences of the United States of America” (PNAS).

Microbes, which are the most primitive and prevalent forms of life on Earth, thrive near hydrothermal vents on the MOR. They consume nutrients from the mix of hot fluids and gases coming out of the chimney-like structures. According to the group’s research, microbes consume at least 30 percent of all hydrogen produced at the MOR. Their effort marks the first attempt to account for all hydrogen within the oceanic environment and provides an initial global estimate for microbial hydrogen consumption within young ocean crust.

“Even though hydrogen is the simplest atom and a fundamental building block of the universe, it is very difficult to account for how it behaves on Earth,” says Karson. “There is an important connection between geological and biological processes that control hydrogen on Earth and most of this activity is happening on the bottom of the ocean where we cannot see it.”

While their research focused on hydrothermal vents with highly concentrated flow, these are only part of the story. Karson says the next step is determining accurate measurements of hydrogen production from other deep-sea processes where the hydrothermal flow is more diffuse. Further research is also warranted to find the hydrogen production in volcanically active zones like the “Ring of Fire” encircling the Pacific region.