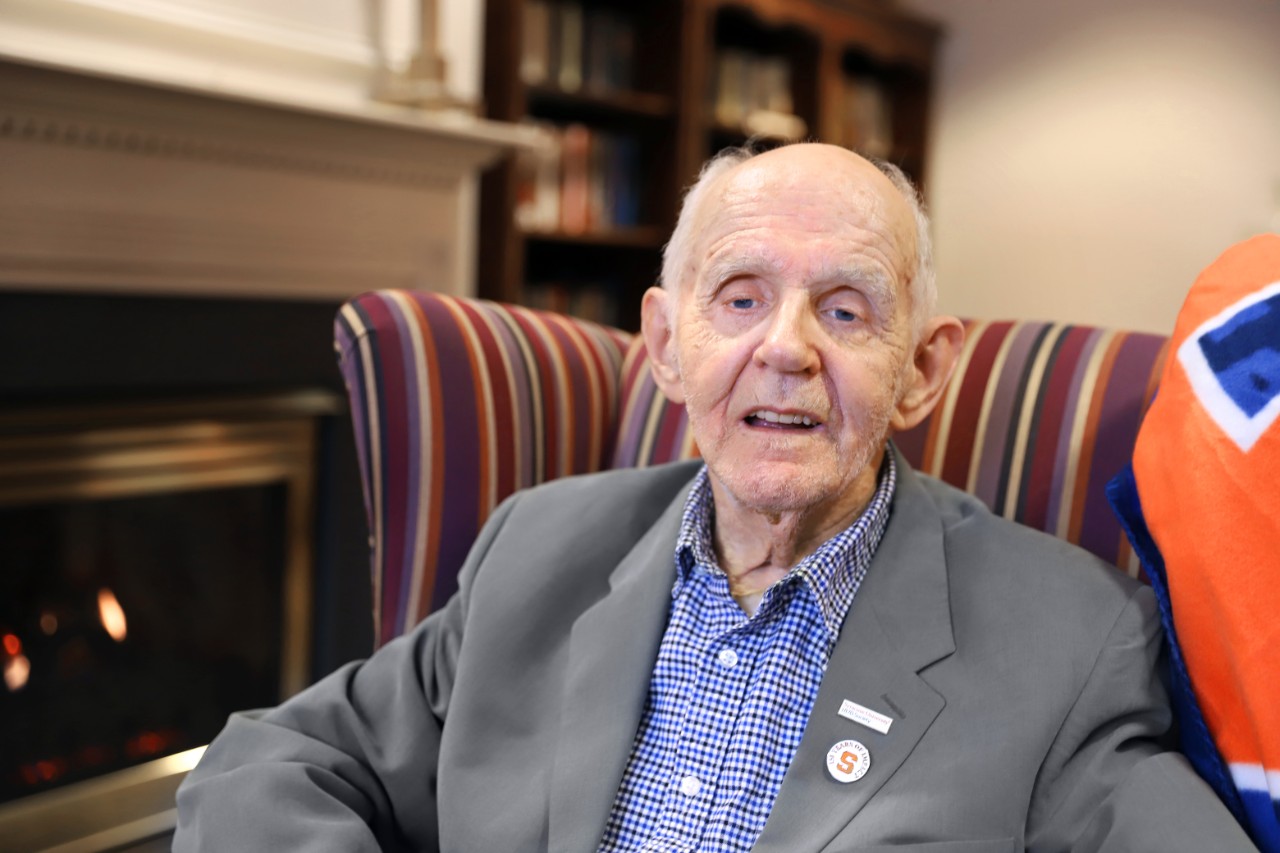 Professor Emeritus Klaus Schroder, an esteemed and longtime faculty member in the College of Engineering and Computer Science, has made a major gift to the University to establish the Klaus Schroder Endowed Professorship for Engineering.

Professor Emeritus Klaus Schroder is grateful for the support Syracuse University has provided for his career, his research and the opportunity to help mentor future engineers. Now that he is retired, he is providing opportunities for future generations of engineering faculty through the University’s largest-ever fundraising effort, Forever Orange: The Campaign for Syracuse University. Through his generous support, his legacy will live on in perpetuity through the Klaus Schroder Endowed Professorship for Engineering.

“This was the best way to help Syracuse University and the next generation of engineers,” Schroder says. “I am happy to be able to make a gift that will help for the long term.”

By his own account, Schroder’s incredible legacy at Syracuse University was not part of the plan after earning his doctorate in Germany at the University of Gottingen in 1954. Schroder spent the first three years of his career in Australia working on metallurgy research and saw that it was the research area in which he wanted to focus. His wife, Marianne, wanted to go back to Germany after he finished in Australia, but Schroder talked her into going to the United States and continuing his research.

“I said, two or three years at the most in the U.S,” Schroder says.

In 1958, the Schroders moved to Urbana, Illinois, when he took a research associate position in the Department of Material Science at the University of Illinois. Schroder worked with Professor Paul Beck and quickly made a name for himself in the area of fundamental metal physics with two papers published in notable journals. Then he received an unexpected offer that changed the course of his career and his plans to return to Germany. James Luker, chair of the Department of Chemical Engineering and Metallurgy, asked Schroder if he would like to join the teaching faculty at Syracuse University. After talking it over, Klaus and Marianne relocated to Central New York in 1961.

“It was too tempting,” Schroder says. “They were very interested in what I was doing and changed the direction of the research program at Syracuse after examining my work.”

His work with alloys, coatings and thin films thrived at his laboratory in Syracuse. He quickly became one of the most cited researchers at the College of Engineering and Computer Science and was awarded two patents while at the University, one for a room temperature superconductor and another for a method of producing an ultra-thin electrically conducting film with very low resistance.

Schroder also found he enjoyed teaching as much as he enjoyed his research on magnetism and metallurgy.

“Introduction to Material Science, General Physics—those were always some of my favorite classes,” Schroder says. He was also well known for his Theory of Materials course that covered the electronic structure of crystalline materials, electron energy distributions along with magnetic and thermal properties.

After retiring from active teaching in 1995, Schroder was honored as an emeriti faculty member and continued working on research in his lab on South Campus until 2015.

“Professor Schroder’s gift is one that touches the heart and soul of Syracuse University’s mission,” says Chancellor Kent Syverud. “There is nothing more meaningful than a gift from a longtime faculty member. When that gift creates an endowed professorship, it is an expression of commitment and a true legacy.”

The Klaus Schroder Endowed Professorship for Engineering will benefit a faculty member in the College of Engineering and Computer Science, providing resources for groundbreaking research and graduate student support.

“This gift by Dr. Schroder will benefit generations of students and faculty at Syracuse,” Dean J. Cole Smith says. “Endowed faculty positions help us attract internationally renowned scholars and educators who provide our students with unparalleled experiences in and out of the classroom. Dr. Schroder has added to his already impressive legacy at Syracuse with his gift, and we are grateful for it.”

About Syracuse University
Syracuse University is a private research university that advances knowledge across disciplines to drive breakthrough discoveries and breakout leadership. Our collection of 13 schools and colleges with over 200 customizable majors close the gap between education and action, so students can take on the world. In and beyond the classroom, we connect people, perspectives and practices to solve interconnected challenges with interdisciplinary approaches. Together, we’re a powerful community that moves ideas, individuals and impact beyond what’s possible.