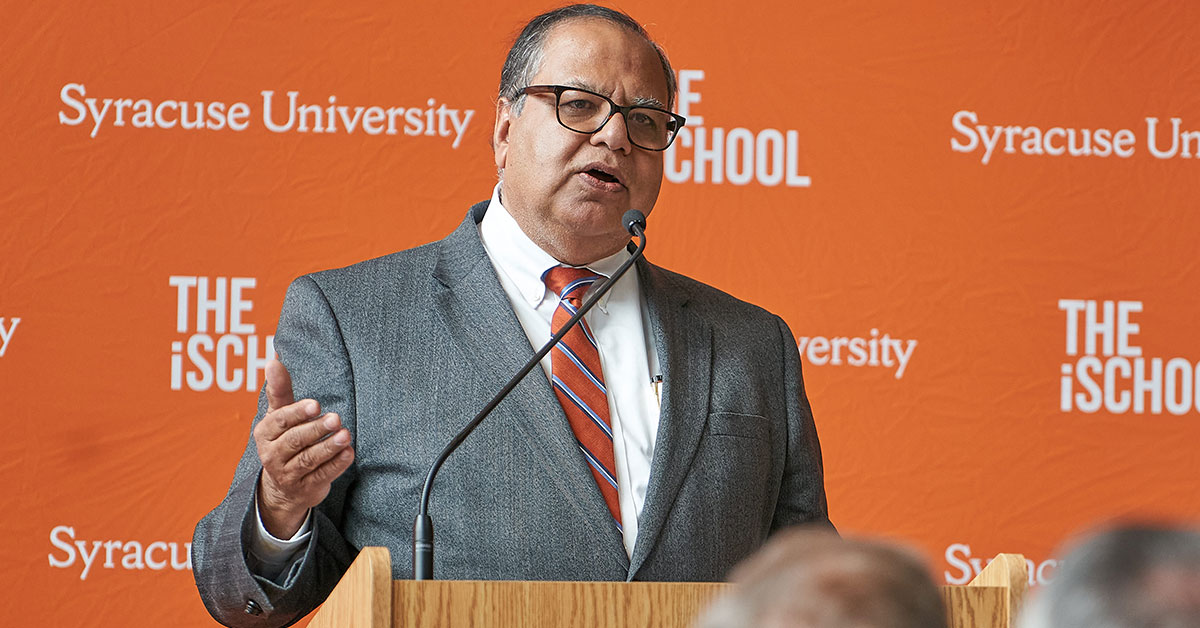 The School of Information Studies welcomed Rajiv Dewan as its new dean on Wednesday, Jan. 15. Dewan comes to Syracuse University from the Simon Business School at the University of Rochester. He succeeds David Seaman, who served as interim dean after Liz Liddy retired in April 2019.

Wednesday’s ceremony took place in the Life Sciences Complex. Seaman delivered the opening address to an audience of iSchool faculty, staff and students. He thanked the iSchool for its time during his tenure and promised Dewan that he was coming into a “highly engaged and collaborative” school.

Interim Vice Chancellor and Provost John Liu spoke next, praising Seaman for the work he did both as the iSchool’s interim dean and as the dean of Libraries over the past year. Liu also thanked Gene Anderson, dean of the Whitman School, who served as the chair of the search committee for the iSchool dean post. And he spoke about the University’s sustained vision on data science and how the iSchool progressed since its founding in 1974.

“Today, our iSchool is one of the very best in the world,” Liu said. “I am confident that with the leadership of our new dean we will create many more firsts.”

Dewan spoke afterwards about his first visit to Hinds Hall and how he noticed the mixing of faculty, staff and students throughout the building. He talked further about his past in a business school and how he felt closer academically to the faculty at the iSchool.

“I really feel, for me, that the academic diameter for me has shrunk, not grown wider,” Dewan said. “At the outset, I feel really at home at the iSchool.”

Dewan concluded by speaking about his family and his preparations to join the Orange family, including buying six orange ties and watching Syracuse University basketball games. Following the ceremony, he spoke with students, faculty and in the Life Sciences Complex.