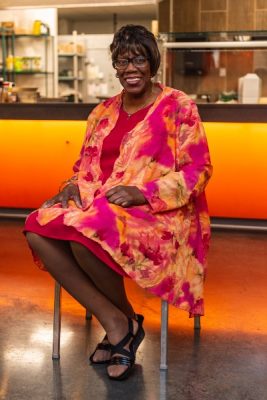 This past October, Gerri Williams celebrated a milestone that most employees—in any job, with any organization—only dream of attaining: her 50th anniversary with Syracuse University.

Williams began her career with Food Services in 1969. She worked in Washington Arms, Haven Hall and the Goldstein Alumni and Faculty Center and dabbled in Campus Catering before landing her current role in Manley Field House’s dining center. At Manley, she works as a group leader, serving the football players and coaches.

“While I was at the Faculty Center I was in the back of the house. I liked it, and everybody was nice to me, but something was missing,” Williams says. “I didn’t know what it was at first—then I realized, I missed connecting with the students, face to face.”

One day in ’99, her manager asked Williams if she could cover a shift at Manley. “I came over here and worked on the grill, I was talking to the kids and I loved it. I thought to myself, ‘This is the bomb!’” she says. “They kept saying to me ‘Gerri, can you stay here all the time?’ and I said, ‘It’s not up to me!’”

But fate was on Williams’ side. After she spent some time splitting shifts between Manley and Goldstein, Manley began serving lunch in addition to breakfast and dinner. A full-time position opened up for Williams. She recounts the day she found out she’d be permanently placed at the football dining center with the enthusiasm of someone who’d just won the jackpot on a slot machine.

“My manager, Kelley, called me up and said ‘Gerri, I’ve got some good news for you,’” Williams says. “They told me that this would be my job, all the time, year-round…I was so happy! I grabbed that poor lady, I was screaming and hollering, thanking the Lord.” 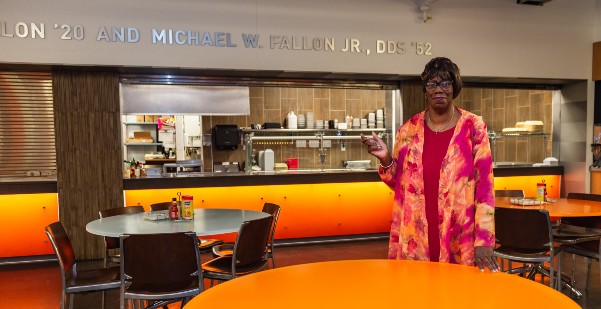 In talking with Williams, it quickly becomes clear that her faith is the source of her abundant supply of positive energy. After facing a brief minor illness last year, she counts her blessings more now than ever before. “If you put God first, he’ll take care of you,” she says. “Everyone is busy worrying about their own problems, but there is always somebody out there with problems worse than what you’re dealing with.”

But she doesn’t underestimate the struggles that many of the students she serves face in their day-to-day lives. “These kids have a lot to deal with. They have their own family problems, their schoolwork, football problems…it’s not easy. They have long days. It’s a lot of pressure.” 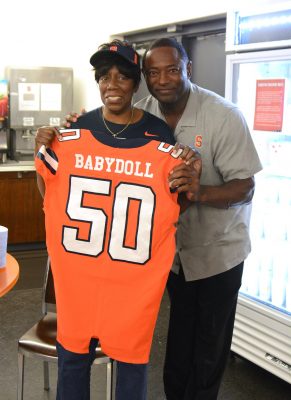 To help ease that pressure, Williams delights in any opportunity to put a smile on someone’s face or turn a student’s day around. She takes extra care to remember if someone prefers ground turkey over ground beef, or a certain preparation of a breakfast sandwich, and then make it especially for them. “It makes me feel good that I can put a smile on their face by remembering what they like. I try to make everybody feel special,” she says. “If somebody is having a bad day, I remind them to put God first. Everybody needs a little attention, even if they don’t say it.”

Those who have been on the receiving end of Gerri’s warmth know that it’s something that won’t soon be forgotten. “I’ve known Gerri the entire time I’ve been here, so 22 years,” says Kelley Champa, director of operations in the Chancellor’s office, who used to oversee Williams in Food Services. “Just knowing her makes you a better person. She’s always positive. She has a good soul. She’s like a mom to the students.”

When asked what it means to her to be seen as a mother figure to so many over the years, Williams pauses, then says: “You know, a long time ago, I used to get jealous when my kids would call another lady their mom. I had an attitude about it. But then I thought about it and figured, I should be thankful and blessed that somebody is watching over my child when I can’t be around them.”

That’s exactly what she does for the students she serves at Manley, all of the other peoples’ children who pass through her line each day. “They know that if they’ve got a problem, they can come talk to me. I tell them, ‘I’m like a doctor—on call 24 hours a day, and there when you need me.’ And if they don’t want to talk about it, then that’s fine. But I always pray for them. Every day.”

“She’s one of those employees that makes everyone’s day brighter,” Joe Sidoni, associate director of campus catering, says of Williams. “She shows up with a smile and gives 100 percent to the students, no matter what else is happening in her life. We’re thrilled to have an employee with such longevity and zest for life!”

Beyond just those who work with her every day, Williams is adored and recognized as a very special part of the Syracuse University community. 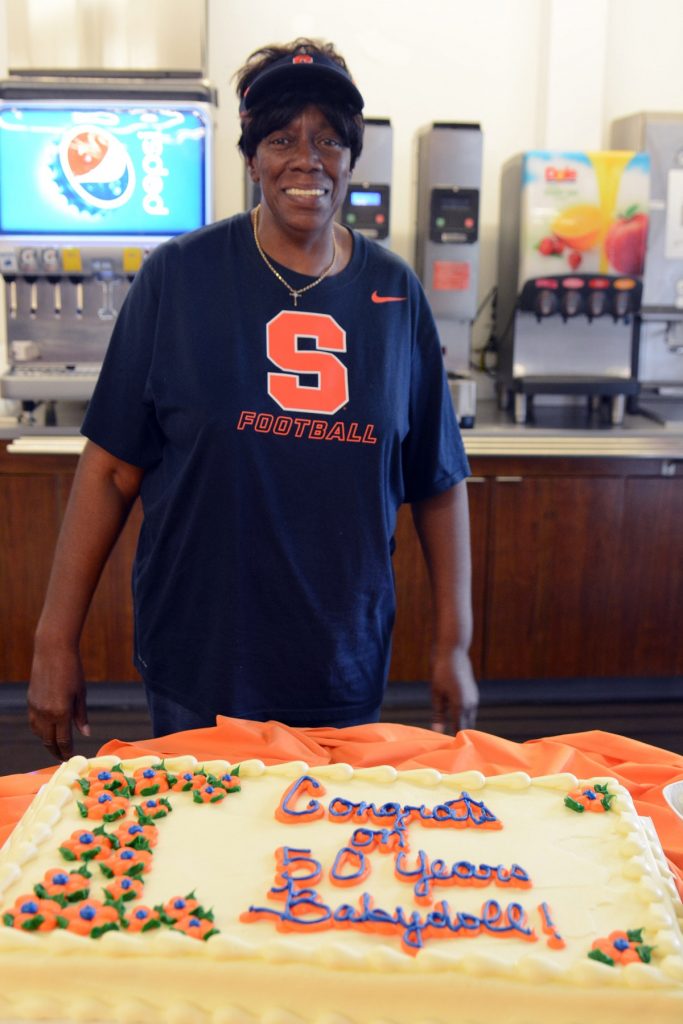 Williams at her 50th anniversary celebration in October

On the day she reached her 50th year of employment—Oct. 13, her lucky number—the morning went by without mention of her milestone anniversary. Gerri thought no one had remembered. She also thought she was going to get called to work at Campus Catering because she’d heard her manager was looking for help covering a shift on that particular day.

“I was eating my lunch and I saw him and I turned my back and was pretending to hide,” she recalls. “I was praying he didn’t ask me to work!” While her back was turned, a group of colleagues put the finishing touches on Williams’ surprise anniversary party. Someone called her name.

She turned to look and saw not only her coworkers but her son, her sister, some of her girlfriends—all there to celebrate with her. Chancellor Kent Syverud and Head Football Coach Dino Babers stopped by and Williams was presented with a customized “BABYDOLL” Syracuse Football jersey, flowers, a cake and even a commemorative game ball.

“To be here after all these years, it’s like the cream on top,” she says. “It’s unbelievable how much support I’ve got. And they always say to me, ‘Babydoll, you don’t know how important you are to us…’ But they don’t really know how important they are to me. To have this many people care about you, it just doesn’t even seem real.”