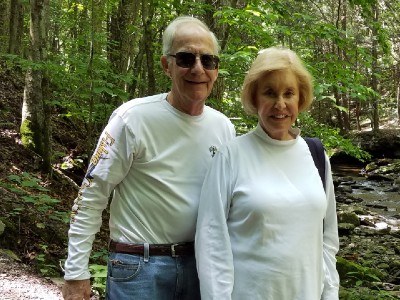 The Gerald B. ’58, ’59 and Roberta M. Faigle ’60 Scholarship for graduate student veterans will empower military veterans as the next generation of public and private sector leaders committed to service beyond self.

The $100,000 endowed scholarship is open to graduate student veterans across Syracuse University’s schools and colleges, both on campus and online, and will be awarded annually. Dan Cordial ’18, MPA ’20, a U.S. Army veteran in the Maxwell School, is first recipient of the new award.

“With this new scholarship, the Faigles exemplify what it is to be ‘Forever Orange,’” says Ron Novack, executive director of the Office of Veterans and Military Affairs. “We are grateful for the family’s commitment, dedication and generosity to both the University and our student veteran-focused work on campus.”

Gerald (Gerry) Brunner Faigle was born in 1936 in New York City and raised in Westfield, New Jersey. He attended Syracuse University, graduating with a Bachelor of Science degree in industrial engineering in 1958 and a Bachelor of Arts degree in economics in 1959. He was also a member of the Delta Epsilon fraternity.

Faigle’s service to his country began as a cadet in Syracuse University’s Air Force Reserve Officer Training Corps (ROTC). He was commissioned upon graduation and moved to Tucson, Arizona, where he served in the U.S. Air Force for three years. He went on to receive an MBA from the University of Pittsburgh and had a successful career at DuPont Co. in various management roles for 31 years.

In summer 1960, Faigle married fellow Syracuse alum Roberta (Bobbie) Messic. Bobbie was a member of Delta Delta Delta and active in student affairs. Two of their three children went on to attend the University. Their extended family includes 26 Syracuse University alumni, an Orange legacy of which they are very proud. The entire Faigle family has included Syracuse University in its giving efforts for many years.