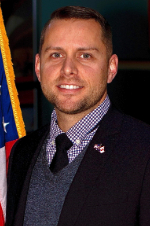 After serving five years as a welder and completing multiple deployments to Iraq, Cordial decided to leave the Army. At the time, he was married to another soldier, and they were expecting a son. He used his trade from the military to find work and he came face-to-face with a reality that many civilians in the manual labor workforce experience.

“I was laid off a month after my son was born,” Cordial says. “It was, oddly, a unique opportunity because I was able to be a stay-at-home dad. I really enjoyed having that time with my son, but after a while I knew I needed to do something. I needed to be bringing money in. I was looking at jobs and couldn’t find anything that really interested me.”

Cordial eventually decided to use his Post-9/11 G.I. Bill to go back to college, starting off at the local community college for a year and a half and working towards studying engineering.

“I attended the University of South Carolina at Columbia for two semesters,” Cordial says. “That just didn’t really work out well for me. I kept going to people for issues I was having, and I was just getting a cold shoulder. That led to failure.”

Cordial experienced what many veterans do as they use their G.I. Bill. While colleges and universities have certain language targeted to attract veterans to their campus, veterans often don’t necessarily feel that their unique needs are being met.

“When my former wife was stationed at Fort Drum, I decided I wanted to come this way to be closer to my son,” Cordial says. “So, I applied to Syracuse University and Le Moyne College, two schools I had never heard of before.”

He was accepted to Syracuse University and decided to change his degree to better suit his interests and desire to remain in public service. At the University, Dan experienced an entirely different way of life for student veterans. With support from veteran-focused groups like the Peer Advisors for Veteran Education, the Student Veterans Organization, the Office of Veteran Success and the Office of Veteran and Military Affairs, Cordial found the support he was lacking before.

“Being a veteran here at Syracuse is actually pretty awesome,” he says.

Cordial graduated with a degree in political science in 2018 and was accepted to the Executive Master’s in Public Administration program at the Maxwell School. During his time at the University, he also has found a unique chance to use his veteran status to impact the local community.

“During my senior year, I was accepted to an internship in the office of Assemblywoman Pamela Hunter (D-Syracuse),” Cordial says. “After that internship was over, they called me up and offered me a job that had a flexible schedule so that I could continue school.”

After Cordial obtains his M.P.A. degree next year, coupled with his service in the U.S. Army and his experience working in the New York State Assembly, Cordial plans to pursue a career in government, preferably in an intelligence capacity.

“I’ve really enjoyed my time here at Syracuse,” he says. “It’s been great, and I truly feel that this is the best place for veterans.” 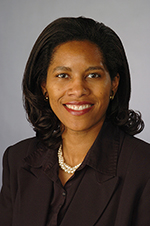 For Syracuse University Associate Provost for Faculty Affairs and Professor of Law LaVonda Reed, service runs deep. The lawyer and academic was born in Quantico, Virginia, after her father, the late U.S. Marine Corps Col. Henry Leon Reed, returned from his first deployment to Vietnam.

“My father was the oldest of eight children—five boys and three girls,” says Reed. “All five boys served in the military, and all three girls married military service members. My paternal grandfather and a paternal great-grandfather and also two maternal great uncles were military veterans as well. One of those uncles, who will celebrate his 102nd birthday this month, was a World War II veteran and retired from the U.S. Navy.”

Reed’s father, Henry, met her mother, Brenda, at Hampton Institute (now Hampton University) while in line registering for freshman classes and paying fees. He was from Beaufort, South Carolina; she was from Mathews, Virginia. They began dating and were married just after graduation. Reed deployed as an infantry officer shortly thereafter. At the time of his commissioning, he was among the first black commissioned officers in the Marine Corps.

Henry Reed had two Vietnam combat tours and one in Desert Storm. Throughout his more than 30 years of service, the family lived in in North Carolina, Virginia, Texas, Maryland, Kansas, Japan, Hawaii, Pennsylvania and California before eventually settling in Fort Washington, Maryland, where Col. Reed retired in 1996, having earned many commendations and medals, including the Bronze Star with Combat “V.” While in Texas, he oversaw the first U.S. Navy Reserve Officer Training Corps program at a historically black institution, Prairie View A&M University. The unit recently celebrated its 50th anniversary, and Brenda Reed was honored.

Throughout her husband’s long career, Brenda Reed maintained and excelled as a woman in STEM. At Hampton, she majored in math and minored in biology. She became a math teacher and taught in local and Department of Defense schools as the family moved around.

“My parents both grew up in the Jim Crow, segregated South,” says Reed. “I watched them excel despite that indignity and grew up knowing the value of hard work, family and dignity. They inspired me and continue to do so. And I would like to think I inherited their solid values and work ethic.”

“When I was at Louisville, I was approached by my now-colleagues at Syracuse,” she says. “I have now been here 13 years. I am tenured here, and it’s the only home my daughter, Madelynn, has known. We love it. For us, it fits.”

Reed’s faculty appointment remains at the law school; in 2015, she began her administration position in the Provost’s Office and soon thereafter began serving as a member of the Office of Veteran and Military Affairs advisory board.

“I have an American flag on my front door. The legacy of service; love for God, family and country; and the importance of protecting democracy—I learned that from my father and mother and grandparents, and am passing on to my daughter,” she says. “Even though I didn’t personally wear a uniform, my service roots run deep. The University’s military commitment is inspiring, and I am honored to work at a place that sees veterans and military families through and through—from research and programs to hiring and admissions and support services. My appointment on the OVMA board is my small way of giving back.”

Syracuse University has a number of notable veteran alumni, including Dan D’Aniello ’68, founding partner and managing director of The Carlyle Group and U.S. Navy veteran. D’Aniello is the co-chairman of the Institute for Veterans and Military Families advisory board. He and his wife, Gayle, provided a $20 million gift for the National Veterans Resource Center opening next semester. See more notable veteran alumni at veterans.syr.edu/alumni.