As part of the University’s enduring commitment to be the nation’s premier institute of higher education for veterans and military-connected students, Syracuse University’s Office of Veterans and Military Affairs (OVMA) has announced the membership of its inaugural advisory board.

Composed of leaders with diverse and deep levels of experience from the military, government, business, higher education and public service sectors, the board will provide advice and counsel to University leadership related to programs, initiatives and opportunities positioned to advance the educational aspirations of the University’s veteran and military-connected students.

“The depth of knowledge, resources and support that the board members bring to our mission of making Syracuse University the ‘Best Place for Veterans’ is invaluable,” says Ron Novack, OVMA executive director. “We are honored to welcome this group of experienced and committed leaders to the OVMA Advisory Board, and we’re grateful for their support of those members of the Syracuse University community who identify as veterans, service members, and as military spouses and children.” 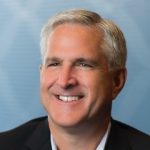 Paul Dottle retired after a 27-year career at American Express, where he served as the executive vice president of Global Business Services. He currently resides in New Providence, New Jersey, and has two children who attended Syracuse University: Madelyn ’18 and Griffin ’14. Griffin attended Syracuse as an Air Force cadet who commissioned as a U.S. Air Force officer in 2014. Griffin is currently stationed at McGuire Air Force Base. Paul Dottle’s father (O-6) and brother (E-7) both retired after long and distinguished careers in the U.S. Army. Paul himself also served in the U.S. Army Reserves. He is passionate about veterans’ affairs and has volunteered for the past year at the VA hospital in Lyons, New Jersey. 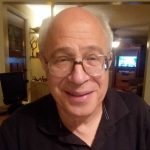 Gary Ginsburg earned a B.S. degree at Syracuse University in 1972 while attending on the G.I. Bill and a master’s degree at the University of Southern California in 1979. Ginsberg served honorably and retired from the U.S. Army after more than 33 years of service, both in the United States and overseas. During his service, he attained the rank of command sergeant major. Currently, he volunteers for the Veterans Outreach Center in Rochester, assisting transitioning service members and their families. He is also a member of the West Point retired Soldier Council and the Webster Chamber of Commerce, and also serves as president of the board of directors for his 104-unit townhouse association. 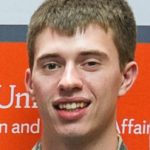 Cadet Zachary Harter currently acts as the FTP director of operations for Air Force ROTC at Syracuse University. Harter entered Air Force ROTC after contracting with a Type 1 AFROTC Scholarship. He is a member and commander of the Arnold Air Society. His other positions within the program have included uniform room technician, detachment readiness technician, PT flight technician, safety and accountability commander and LLAB squadron commander.

Harter is majoring in aerospace engineering and pursuing a minor in management studies. He challenges himself even more by running his own painting business, for which he is able to apply his leadership skills and knowledge to his crews of painters and marketers. Harter, upon commissioning, will pursue an Air Force career as a pilot.

Apart from school and ROTC, Harter enjoys spending his time volunteering for various community service events. With hundreds of hours volunteered, he has engaged in numerous events ranging from helping at the local VA Medical Center to helping to feed those in need at the local Samaritan Center.

Cydney Johnson is executive director of state and local government relations at Syracuse University. She boasts more than 25 years of experience in government relations, higher education and nonprofit/business development. A double alumna of SU, having received her undergraduate degree in retailing and her M.B.A. from the Whitman School. Johnson’s professional experience includes seven years as an adjunct professor in the David B. Falk College of Sport and Human Dynamics, an appointment as senior vice president of U.S. accounts at Blueprint LTD, a small global marketing firm; vice president of consumer marketing and sales at Oneida Limited; and tenure as director of development at the Whitman School. Johnson is a member of the Central New York Regional Development and Planning Board and a board member of the Syracuse Partnership Council with the Syracuse City School District. 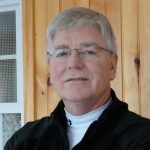 Jim Lee has worked in the petroleum distribution business for more than 28 years (currently with NOCO Energy Corp.) and is an equity partner with Menio Global, an independent agent of Card Connect–a First Data Company. He serves on the board of the Retreat Center: Christ the King Retreat House and is chairman of the Harold Lee Open Golf Tournament, named in honor of his father, who served in the U.S. Coast Guard. To date, the tournament has raised more than $372,000 to benefit disabled veterans through various local organizations. Lee has also been the recipient of the Onondaga County Veterans Council Humanitarian of the Year Award and the Whitman School of Management Dean’s Citation for Exceptional Service Award.

A 1975 SU graduate, earning a degree in math and education, he was  co-captain of the 1975 men’s basketball Final Four team. He is a recipient of  SU’s Vic Hanson Medal of Excellence Award and Letter Winner of Distinction Award and is a member of SU’s All Century Basketball Team. Lee is author of “Fifteen Feet For Free,” a simple guide to foul shooting for players at any level—from the driveway to the NBA. A portion of the proceeds from the sale of the book is donated to the Entrepreneurship Bootcamp for Veterans program presented by the Institute for Veterans and Military Families at Syracuse University. Lee and his wife, Lou Ann, have two daughters, Amanda and Suzanne (Matt), and a son, Jay. 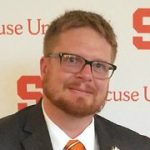 Adam LeGrand served in the U.S. Air Force as a medic from 2001 until his medical retirement in 2011. He served at the 106th Rescue Wing, 1st Fighter Wing, and 88th Medical Group. He deployed in support of Operation Enduring Freedom, Operation Iraqi Freedom and Operation Noble Eagle. LeGrand earned a bachelor’s degree in communications and rhetorical studies at SU in 2018 and is currently pursuing a Master’s in Public Administration degree with a graduate certificate in national security and counterterrorism at the Maxwell School. Adam is a peer advisor for veteran education (PAVE) at SU and the current Student Veterans Organization (SVO) president. In February 2017, he created the Disabled Student Veteran Liaison Program to help and aid disabled student veterans. 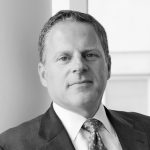 Quaglio has more than 30 years’ experience in a variety of management consulting and industry positions, including expertise in information services, technology, government, communications/media, consumer products and manufacturing. Before joining Celerity in 2017, he served as president/CEO of Siteworx, an award-winning digital experience consultancy. He previously served as COO of 3Pillar Global and held a principal/partner role with Ernst & Young, where he developed a major new health care practice and led their Federal Advisory performance improvement service line. Quaglio was president of command information and held various leadership positions within the global marketing organization of Electronic Data Systems Corp. (EDS). He also held a vice president/partner role at A.T. Kearney (acquired by EDS) and started his career with Booz Allen Hamilton.

Quaglio is a 29-year U.S. Army veteran who helped launch the Entrepreneurship Bootcamp for Veterans’ Families at Syracuse University. He is a member of the board of directors at Shenandoah Telecommunications, where he serves on the audit committee, and the Shentel Foundation. Quaglio supports Miriam’s Kitchen, an organization committed to ending chronic homelessness in Washington, D.C.

He holds a B.S. in biological science from Florida State University and an M.B.A. in organization and management from SU. 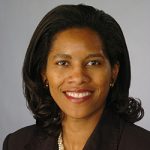 LaVonda Reed is a professor of law and the University’s associate provost for faculty affairs. She is an expert in the areas of wills and trusts, property and communications law, having joined the faculty in 2006. Previously, she was a member of the faculty of the Brandeis School of Law at the University of Louisville and a judicial clerk for the Hon. Donald W. VanArtsdalen of the U.S. District Court for the Eastern District of Pennsylvania. She has experience in private practice as an attorney with the international law firm of Paul, Hastings, Janofsky & Walker LLP. While in practice, she represented businesses and financial institutions in various aspects of communications and corporate law.

Reed holds a bachelor’s degree from the University of Virginia and a juris doctor degree from the University of Southern California. She is admitted to practice in Maryland and the District of Columbia. A member of the Federal Communications Bar Association and the American Bar Association, Reed serves on the executive committee of the Section on Mass Communication Law of the Association of American Law Schools, as well as on a number of other university, law school, national and local committees and advisory boards. 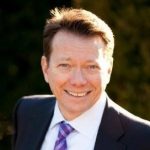 Glenn Richardson is a noted industry leader, advisor, coach and executive consultant. He provides leadership and executive coaching, business optimization and transformation advisory, strategic communications and other professional services across a diverse client base. His post-military employment history includes serving as a manager at Coopers & Lybrand LLP, partner at Arthur Andersen LLP, partner at Deloitte LLP and president of FedBid Inc.

Richardson served in the U.S. Army in reserve and active components, and as a noncommissioned and commissioned officer. His military assignments included the U.S. Army Special Operations Command; U.S. Army, Europe; and The Joint Staff.

He is a graduate of the Army (now Defense) Comptrollership Program at Syracuse University and has participated in the Entrepreneurship Bootcamp for Veterans as a speaker and panelist. In addition to an M.B.A. from SU, Richardson earned a master’s degree at the U.S. Naval War College and undergraduate degrees at North Carolina State University.

Richardson currently serves on the board of directors for the Human Resources Leadership Forum and on the advisory boards of several socially conscious companies that “do well by doing good.” Richardson and his wife, Carol, reside in Leesburg, Virginia, with two dogs and one horse. 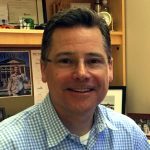 Mark Westerveldt is vice president for software engineering/development management at Fidelity Investments, where he has been employed since 1990. At Fidelity, he is responsible for leading a global software development organization that provides software products on behalf of Fidelity’s institutional businesses.  Prior to Fidelity, Westerveldt held several positions at Electronic Data Systems.

Westerveldt is also in his fourth season as coach of the Boston University Terrier Ski Team. He holds a commercial pilots license with an instrument rating, and is president of the Lawrence, Massachusetts-based Aeronauts Flying Club. He has also flown more than 25 charity flights for Angel Flight of New England. In his hometown of North Reading, Massachusetts, Westerveldt served multiple terms on the town’s finance committee and coached youth soccer.

An alumnus of Bentley University, where he received degrees in computer information systems and management, he is the father of SU Army ROTC cadet Adam Westerveldt ’18.

About the Office of Veteran and Military Affairs

The Office of Veteran and Military Affairs serves as Syracuse University’s single point of entry for all veteran and military-related programs and initiatives. Committed to being the “best place for veterans™,” the office assists University stakeholders to support and empower veteran, military-connected and military family member students and employees who are veterans at the University.

From Ghana, With Duffle Bag

It’s not every day a student arrives on campus with their whole life tucked away into a single military duffle bag, but for Kelvin Nyamalor, a student veteran at Syracuse University, that was exactly how he arrived. “I came here during the…

U.S. Army Lt. Col. Jennifer Gotie didn’t grow up envisioning a career in military service. Born and raised in Truxton, New York, she imagined a life for herself as a diplomat and as a result became involved with the Rotary…

President Trump is expected to sign the “Supporting Veterans in STEM Careers Act” which would make veterans eligible for National Science Foundation programs connected to careers in STEM and computer science. Rosalinda Maury is the Director of Applied Research and Analytics…