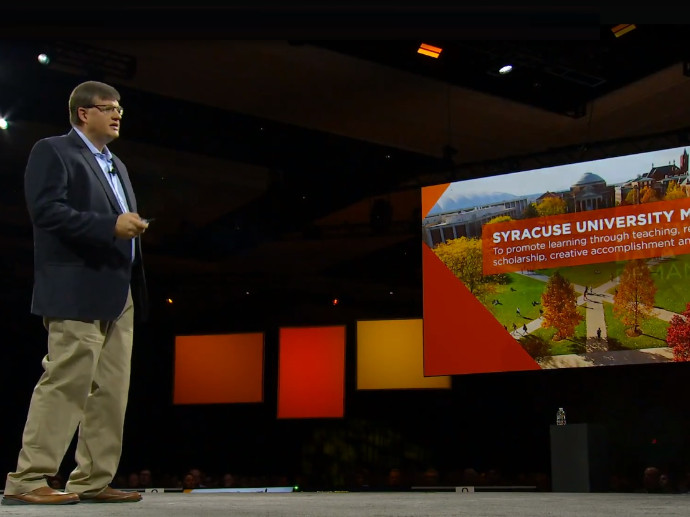 Eric Sedore at the NetApp Insight Conference in Las Vegas

Eric Sedore, associate chief information officer with Information Technology Services (ITS), took part in the conference keynote presentation. He discussed how Syracuse University approaches the challenges and opportunities of supporting the data needs of a global research university.

“In the last seven years, we’ve seen explosive research data growth,” Sedore said. “We’re a research university, it’s what we do. Research requires data—and a lot of it. Whether it’s genomic data, gravitational wave data, or soft matter data in the STEM areas, or 3D rendering in our render farms for our College of Visual and Performing Arts, we’re producing the lifeblood of the institution in this data.”

“University research is increasingly multidisciplinary, collaborative and it has always been data-driven,” NetApp chief executive officer George Kurian said during the presentation. “Universities today compete for talent—for students and researchers. One of the key ways they’re doing that is by giving researchers the tools and IT platforms that enable them to advance their research quickly.”

Sedore explained how the ITS infrastructure team balances fiscal concerns such as sustainability and cost avoidance with enabling students, faculty and researchers to “change the world.” An example of this world-changing impact: Syracuse University researchers and ITS staff played a key role in the Nobel Prize-winning discovery of gravitational waves from colliding black holes.

“Syracuse University researchers helped develop the algorithm,” Sedore told the audience. “We also contributed a significant amount of computing power to mine the data to find the signal.

“One day, (Charles Brightman Endowed Professor of Physics) Duncan Brown came to my office and said we had done it—we had found the existence of gravitational waves. So I was pretty pumped. I came out from behind my desk and went for a handshake. What I got was a hug. In that moment, I realized we had moved from being just the infrastructure people to being an integral part of the process.”