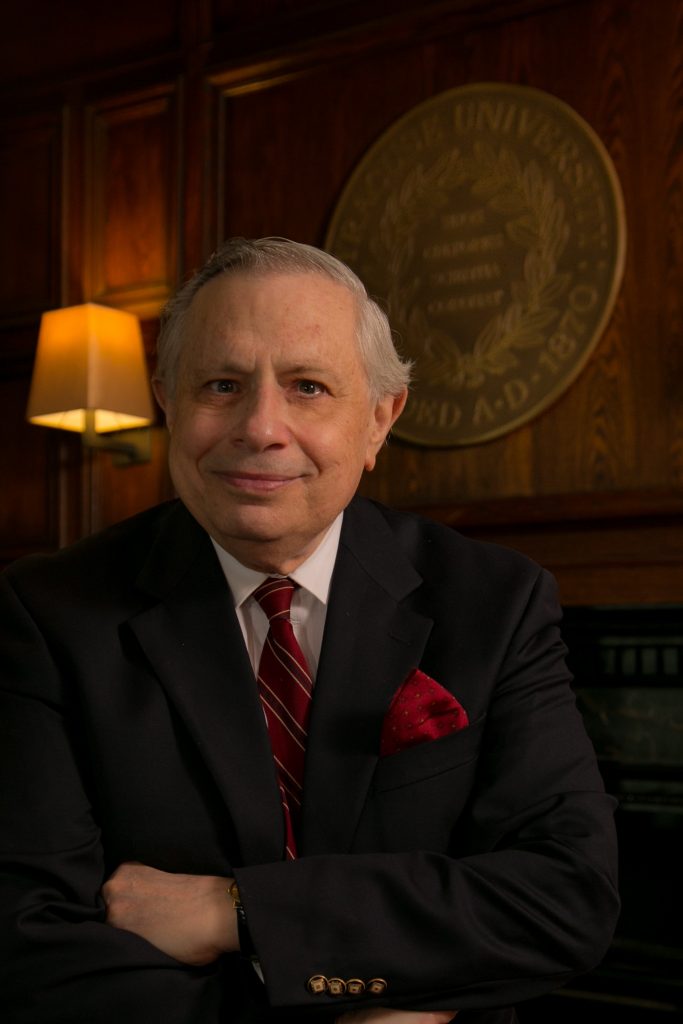 When Elliot J. Stamler ’60 arrived at Syracuse University in the late 1950s, he was only 17 years old. Now 80, Stamler still recalls the words of Chancellor William P. Tolley, who welcomed the entering class at convocation in Hendricks Chapel:  “From now on, you are all Syracusans. Your time here will be an experience you will never forget.”

Throughout his lifetime, Stamler remembered those words. As a testament to that enduring memory and to further demonstrate his appreciation for the many ways Syracuse University impacted his life, Stamler has named the University as a beneficiary of a portion of his estate, totaling $5,480,000, to be directed to multiple recipients on campus to support academic and research excellence.

“This extraordinary gift will help shape the experiences of countless students, just as Elliot says his career was shaped by his University experiences,” says Chancellor Kent Syverud. “His generosity, his wisdom and his guidance will continue to positively impact the student experience for generations to come.”

Following his graduation from Syracuse University, Stamler attended Columbia University, graduating with an MBA in 1965. In explaining his enthusiasm for Syracuse University and his decision to bequeath his estate to its academic programs, Stamler notes: “The tremendous rise in the academic prestige of Syracuse University leads me to it is now right below the Ivy League, and I say that as one who is (also) an Ivy League alum…I am very happy to make these future gifts to my alma mater, and their good will outlast my own life. My gift to Maxwell is crucially important at this time, I believe, because democracy in our country is at a precarious point. Maxwell through its students and alumni is a potent, positive force now and in the future for the preservation of our democracy.”

Stamler knows well what it means to invest in the future. He is retired from running his own investment company, Northstar Assets. After receiving his MBA from Columbia, he began his career as an advertising/publicity executive with Columbia Pictures Television/Screen Gems Inc. in New York. In the mid-1980s, he was a vice president with First Hanover Realty. By 2004, he was president of Northwest Asset Management.

“Elliot’s life, professional career and legacy have been deeply shaped by the professors that challenged him to think critically and analytically and to engage uncertainty and complexity,” says David M. Van Slyke, dean of the Maxwell School. “While he did not pursue a career in political science, his academic experience, the breadth of his interdisciplinary studies, and the leadership experiences on campus have  served him so well in his diverse professional and civic pursuits. Through his legacy gift, he has forever memorialized his gratitude for these experiences and inspired others to impact future generations as he was motivated.”

Momentum continues to build as Syracuse University prepares to launch its largest fundraising campaign in its 150 years. Though details are still being finalized, the Orange community is encouraged to stay tuned for a historic announcement, coming later this week. In the meantime, it’s never too early to give. No gift is too small and every gift makes an impact. To make an immediate impact, give today by visiting giving.syr.edu  or by contacting the Office of Development at 315.443.1848.

For alumni, there are numerous other ways to engage with the University, including volunteer opportunities, connecting current students to internship opportunities, attending an alumni event and so much more. To learn more about how you can connect to, engage with and support Syracuse University, please visit alumni.syr.edu. You can also contact the Alumni Association directly by emailing sualumni@syr.edu.

Syracuse University is a private research university that advances knowledge across disciplines to drive breakthrough discoveries and breakout leadership. Our collection of 13 schools and colleges with over 200 customizable majors closes the gap between education and action, so students can take on the world. In and beyond the classroom, we connect people, perspectives and practices to solve interconnected challenges with interdisciplinary approaches. Together, we’re a powerful community that moves ideas, individuals and impact beyond what’s possible. Learn more by visiting syracuse.edu.