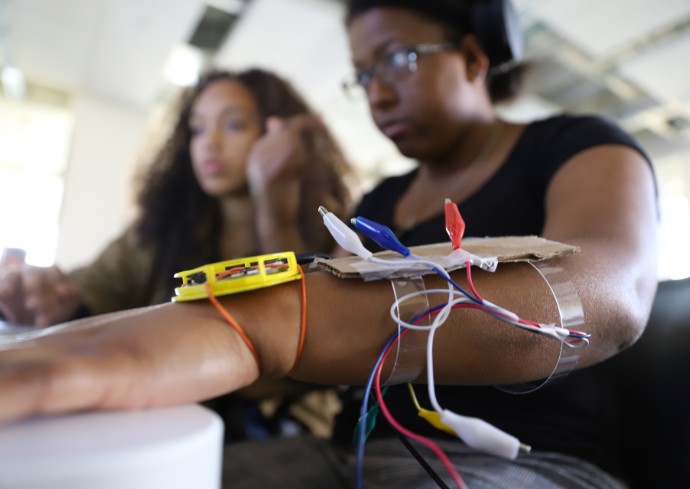 Students testing their devices in 369 Link.

At first glance it looked like first-year bioengineering major Olivia Kmito ’23 and her partner Kevin Place ’23 were just playing the video game Tetris in their ECS 101 class, but if you looked closely you could see they were not using a keyboard or mouse. Kmito, Place and their classmates had designed and built assistive technology devices that would allow a user to move a mouse cursor and use the W, A, S, D and space bar buttons without the use of individual fingers.

Professor Jay Henderson gave each two student team a round circuit board with a variety of built-in sensors, including an accelerometer, a light sensor and a temperature sensor. Then they had the freedom to design a custom human interface device in the way they wanted to.

“They learned how they wanted to use the sensors to control the mouse and the keys,” said Henderson.

In addition to Tetris, the students tested their devices while playing online games Hexar.io and diep.io. In both games, players typically use a cursor and/or a combination of keys to move around a board while competing with online opponents.

“We used the accelerometer as our mouse and used a touchpad to link it back,” said Place.

Several of the ECS 101 students were able to hold their own in the games even though they were still getting accustomed to their assistive devices.

“Learning to code was tough but it was amazing to see it work and play Tetris” said Kmito.