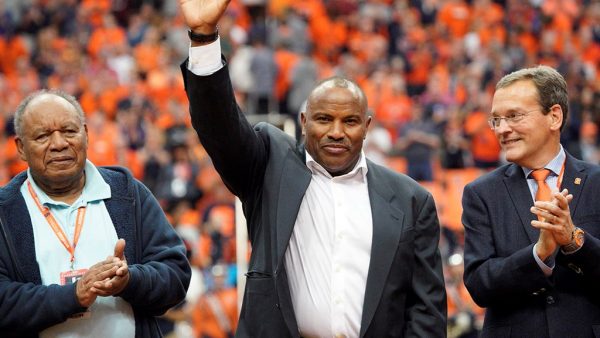 A member of Syracuse’s All-Century Team, Morris’ No. 47 jersey was retired by the University in 2018.

Morris will join 13 other greats as honorees during the ACC Night of Legends at the Charlotte Convention Center on Friday, Dec. 6. The class will also be recognized during the on-field, pregame festivities at the 15th annual Dr Pepper ACC Football Championship Game set for Saturday, Dec. 7 at Charlotte’s Bank of America Stadium.

The Ayers, Massachusetts, native posted three 1,000-yard rushing seasons, including his rookie year of 1978 when he became the only freshman in team history to reach the milestone. Morris finished the campaign with 1,001 yards and was named ECAC Rookie of the Year.

The next season, Morris authored the finest one-year rushing performance in Syracuse history. He ran for a school-record 1,372 yards and seven touchdowns on 238 carries (5.7 avg.). He also led the Orange to their first bowl victory in 18 years, closing the season with 155 yards to propel the Orange to a 31-7 triumph over McNeese State in the 1979 Independence Bowl.

Morris’s list of collegiate honors includes All-America certificates in 1979 and 1981, and the 1980 ECAC Offensive Player of the Year Award, an honor he shared with Yale’s Rich Diana, despite playing only six games because of injury.

Following his Orange career, Morris was selected by the New York Giants in the second round of the 1982 NFL Draft. He spent eight seasons (1982-88, 1991) in the NFL, including seven in New York. While with the Giants, Morris set franchise career rushing record with 5,296 yards (since broken). He was a two-time Pro Bowl selection and helped the team win its first Super Bowl title in 1986.

A member of Syracuse’s All-Century Team, Morris’ No. 47 jersey was retired by the school in 2018.