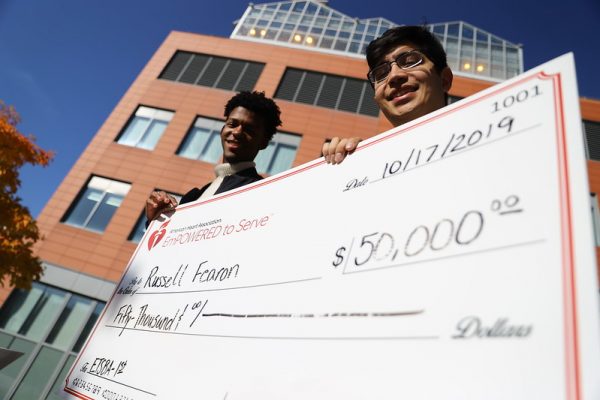 When mechanical engineering senior Russell Fearon ’20 learned he had diabetes, he also learned it meant his life would change.

“When I was first diagnosed it was obviously extremely, extremely difficult,” said Fearon. “The doctors come to you and tell you, you have to do this, this is how your life is now.”

He had to adjust to regular blood sugar testing and carrying testing equipment with him at all times. It was awkward and uncomfortable at times. During the Invent@SU invention accelerator program this past summer he started thinking about ways to improve the testing process. Working with industrial and interactive design major Ricardo Sanchez ’21, they came up with an idea—what if a wearable device could take a blood sample and test it?

“Once the watch came about, it stuck and we knew this was what we had to do,” said Fearon.

Fearon and Sanchez developed a prototype over the six-week Invent@SU program and pitched each week to guest evaluators and judges. Even though they did not win, they knew they wanted to keep moving forward.

“I knew, if I could get a watch to work and take blood sugar that would change my life, that would make me feel so much better,” said Fearon.

Fearon presented at another competition on Martha’s Vineyard just days after Invent@SU and then applied to the American Heart Association’s EmPOWERED to Serve Business Accelerator Competition. At the same time, Fearon and Sanchez had also improved their watch design and pitch while working with Blackstone Launchpad at Bird Library.

“In talking to engineering professors we figured out that we could use solenoid actuators on the inside to make it more usable and less clunky and boxy,” said Sanchez.

Fearon was named one of nine finalists for the American Heart Association competition on Oct. 25, 2019.

“It was a little daunting at first because I saw the lineup of people. And I’m like, I’m a college student going up against really, really established people,” said Fearon.

He would be presenting in the Oprah Winfrey Theater in the National Museum of African American History and Culture to a standing room only crowd.

“They say Russell Fearon, the lights are shining, they have a huge spotlight in front of the whole entire theater,” said Fearon. “I tried to be as personable and connect with them as well as I could.”

When they were announced as the winner of the $5000 fan favorite award, Fearon and Sanchez were thrilled.

“I had so much support from Syracuse University from friends at home, family,” said Fearon.

Moments later it was time to announce the first place, $50,000 winner. Fearon heard his name called and it took a moment to set in that he had won.

“When it happened I was at a loss for words, thank god they didn’t have me say anything at the moment because it was so surprising. Ricardo was right there and I gave him a hug,” said Fearon.

Their idea and their work had been validated in a way they never expected.

“It makes everything that we have been doing, all the pain, all the sacrifices that I have made, it makes all that worth it,” said Fearon.

“Up until this point everything I had done is just a school project or maybe a something small on the side that I might be doing for myself but now this is a real project outside of school with real results so that is super exciting,” said Sanchez.

Fearon and Sanchez are now adjusting to being inventors, entrepreneurs and students all at the same time. They are continuing to work with Blackstone Launchpad on moving their idea forward.

“We wouldn’t be here without Invent@SU without having that month and a half where we dedicated ourselves to developing a product that is making an impact. I would say it is a huge part,” said Sanchez.

“That’s the genesis, that’s where it all started. Invent@SU people are all really great at birthing an idea, conceiving it, moving it forward, developing,” said Fearon. “We have a plan moving forward and milestones to hit. It can all be done.”