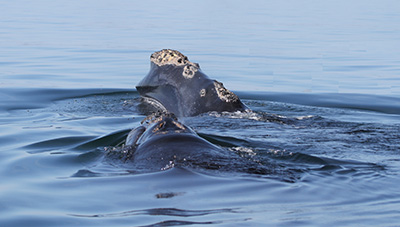 On June 20, a whale researchers had named Punctuation was found dead in the Gulf of Saint Lawrence, a busy international shipping channel. Punctuation—so named for her comma-shaped scars—was a North Atlantic right whale, a species severely threatened by human activity. With only 420 left in the world, it is one of the most endangered whale species. Any additional death, especially of a reproductive female, puts the species further in jeopardy.

News of this death was particularly difficult for Syracuse University biology Professor Susan Parks, who had studied and written about Punctuation in a paper exploring acoustic communication among North Atlantic right whales.

Parks has studied North Atlantic right whale behavior and acoustic communication since 1998. She leads the Bioacoustics and Behavioral Ecology Lab in the College of Arts and Sciences, whose researchers study the sounds animals make, including those of right whales.

The recent study in Biology Letters explores whether mother-calf pairs change their vocalizations to keep predators from detecting them. Right whales, due to their large size, have few natural predators and are only vulnerable to orca or sharks when they are young calves.

One way to reduce the risk of predation for young calves would be for mothers to hide their young. Because the water is murky, predators are most likely to find right whales by eavesdropping on their communication signals. Any hiding by a mother and her calf would have to be acoustic—that is, producing little or no sound.

Parks and her collaborators studied whether mothers with young calves stop using the usual loud, long-distance communication signals to talk to other right whales. To collect the data, the team listened to whale sounds in the North Atlantic right whale calving grounds off the coasts of Florida and Georgia, using small recording tags attached to the whales by suction cups. Collecting data from mother-calf pairs, and from other juvenile and pregnant whales in the habitat that have less need to hide, the researchers sought to determine if mothers were modifying their behavior to be less conspicuous.

The Biology Letters study shows that mother-calf pairs drastically reduce the production of these common, louder sounds but they also produced a very soft, short, grunt-like sound. These grunts, previously unknown in right whales, were only detectable by the attached recording devices and were not audible more than a short distance from the mother-calf pair.

“These sounds can be thought of almost like a human whisper,” Parks says. “They allow the mother and calf to stay in touch with each other without advertising their presence to potential predators in the area.

“Right whales face a number of challenges, including a very low number of calves born in recent years combined with a number of deaths from collisions with large ships or entanglement in heavy fishing gear. There have been 30 confirmed right whale deaths in the past three years, including the recent death of Punctuation in June of this year. There are still so many things we don’t know about their behavior, and it is my hope that studies like these will help to improve efforts for their conservation.”

The study was supported by the U.S. Office of Naval Research (ONR Award N000140410709); and the U.S. Fleet Forces Command (managed by Naval Facilities Engineering Command Atlantic as part of the U.S. Navy’s Marine Species Monitoring Program). The team’s research was approved by the Institutional Animal Care and Use committees of Syracuse University and Duke University and collected under U.S. National Marine Fisheries Service Permits.