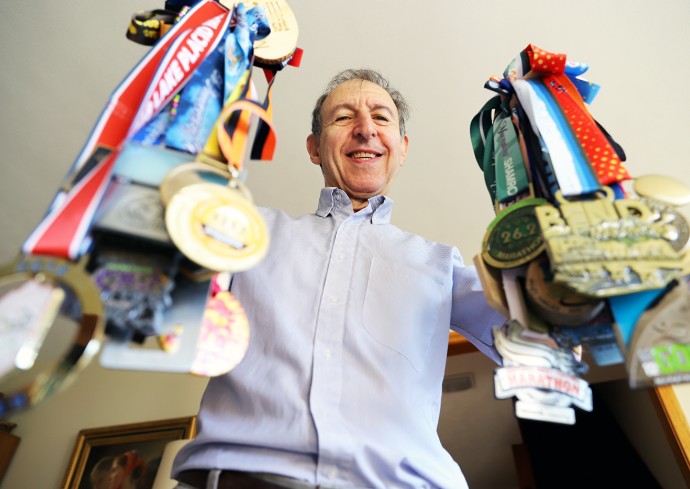 Professor Cliff Davidson shows off his collection of medals earned at his 99 marathons. He will run his 100th this October.

When the gun goes off at the Empire State Marathon this October, Professor Cliff Davidson will hit an extraordinary milestone—100 marathons in less than 19 years.

Davidson, an environmental engineering professor in the Department of Civil and Environmental Engineering, ran his first marathon in 2001 shortly before his 51st birthday. That experience quickly gave way to running five marathons a year, on average.

Davidson runs 10 kilometers, outdoors, every other day—including during Central New York’s notorious winters. These “short” runs keep him in shape for the big races, but that’s not why he’s out there. Davidson runs because he loves to.

“It’s the feeling of being free when I’m out running that I love,” says Davidson. “I also love being outdoors. I never could stand spending long periods indoors. I don’t go on treadmills. I want to be outside, engaged with my surroundings.”

Davidson is the Thomas and Colleen Wilmot Chair in Engineering in the College of Engineering and Computer Science and a renowned expert in his field. Despite a career of outstanding accomplishments and a heavy workload, he remains a consistently kind and modest man—brilliant and unassuming. He spends his days teaching, researching, writing grant proposals and serving as an academic program director, among many other responsibilities. Running provides a respite from the hard work and helps refresh his intense focus.

“I find that running is a great time to think about my research, my next paper or to plan a class problem. It stimulates those kinds of thoughts and is also a wonderful way to celebrate after a big proposal goes in. You can just let your mind go,” he says.

Davidson’s adoration of nature and fresh air is what led him to both running and environmental research. On any given day, you’re likely to find him atop the OnCenter in downtown Syracuse, tending to instrumentation and vegetation on its one-and-a-half acre green roof. The centerpiece of Onondaga County’s green infrastructure initiative, it is one of the largest green roofs in the Northeast.

Davidson initially set out to be an electrical engineer but found that the discipline didn’t provide enough opportunities for him to work outdoors. Even today, as an accomplished and renowned researcher, he chafes at the idea of being stuck behind a desk or in a lab day after day without outdoor recreation.

“Doing environmental work like the green roof is perfect for me,” he says. “When I was coming up as an assistant professor, I heard a lot of full professors say they didn’t have time to work in the field anymore. I am never going to want to give up the hands-on work.”

And, running is no different. Davidson will confess that his recovery time from a marathon has gone up with age, but he remains the picture of health as he nears 70. He takes special care to avoid injuries, especially in the winter. He says, “I always wait for the snowplows to come through.”

While his runs are often solitary and contemplative, it is Davidson’s love of community that makes him return to marathoning so frequently. Davidson appreciates the camaraderie that forms during marathons.

He says, “Marathons are very social. You’re meeting people. You’re talking to people. It’s kind of like being at a party. It’s never boring. You’re always chatting with somebody. If your pace is a little different or somebody you’re running with is getting tired, you wish each other well, and pretty soon somebody else comes up. I’ve met so many interesting people this way.”

With 99 marathons and a lifetime of fascinating research under his belt, Davidson might be the most interesting person in the Empire State Marathon this fall. If you find yourself running alongside him, the miles will pass quickly, you’ll learn a great deal and you’ll have a richer experience for having met him.