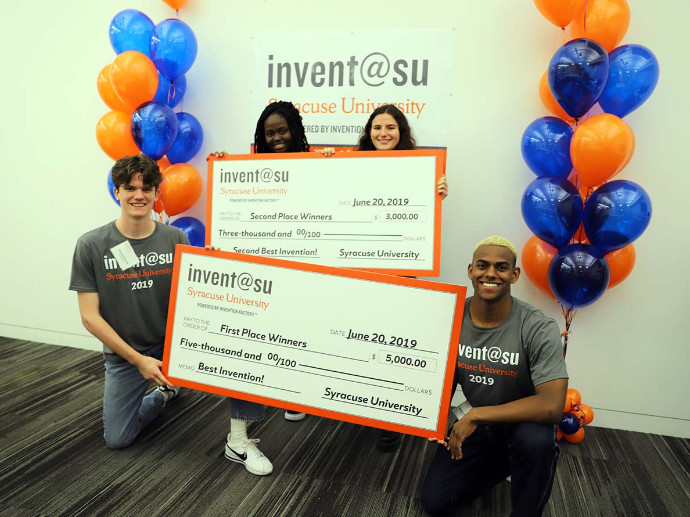 They saw a problem and wanted to do something about it. Maxwell Boise ’21 and Emmett Burns ’21 had an idea for an easy to carry, portable splint device—and the six week Invent@SU program in New York City gave them an opportunity to design, prototype and pitch their concept.

“I was thinking about my background as a Boy Scout and in hiking, so we wanted to have something that was just a piece of gear that was really compact: someone has it in a pouch, slip in your pocket, slip it in your backpack,” says Boise.

“The current options are just super large devices that you would never bring on a trip with you,” says Burns.

Their Porta-Splint device can be adapted to help with a variety of injuries from ankle sprains to broken limbs.

“You can change the shape of it and it will immobilize and support that injury to help you get back to safety,” says Boise.

Boise and Burns were one of ten teams working out of the Fisher Center in Manhattan to develop new inventions. The program is open to all Syracuse University undergraduates. With help from Mechanical Engineering Professor Yevgeniy Yesilevskiy and his graduate assistants, they constructed working prototypes and pitched them to guest evaluators each week.

“This is real. This is like real life, this is hands-on stuff, says Jenniviv Bansah ’22. “You would be surprised by how much stuff that can change.”

After six weeks, all 10 teams presented their inventions to a panel of entrepreneurs, engineers and business leaders. Boise and Burns’ Porta-Splint took first place. Bansah and Skyler Hall ’21 took second place with a device to help people with hand tremors drink from a cup or bottle.

“It’s such an empowering device that if we can make it customizable for people it can really uplift their confidence and just make them happy,” says Bansah.

Several of the Invent@SU teams plan to work with Blackstone Launchpad in Bird Library to move forward as a business.

“It makes you realize that a lot of things that seem super daunting, creating your own product, something you never could do–you totally can,” says Burns. “It is a good kick-start into the entrepreneurial world for sure.”