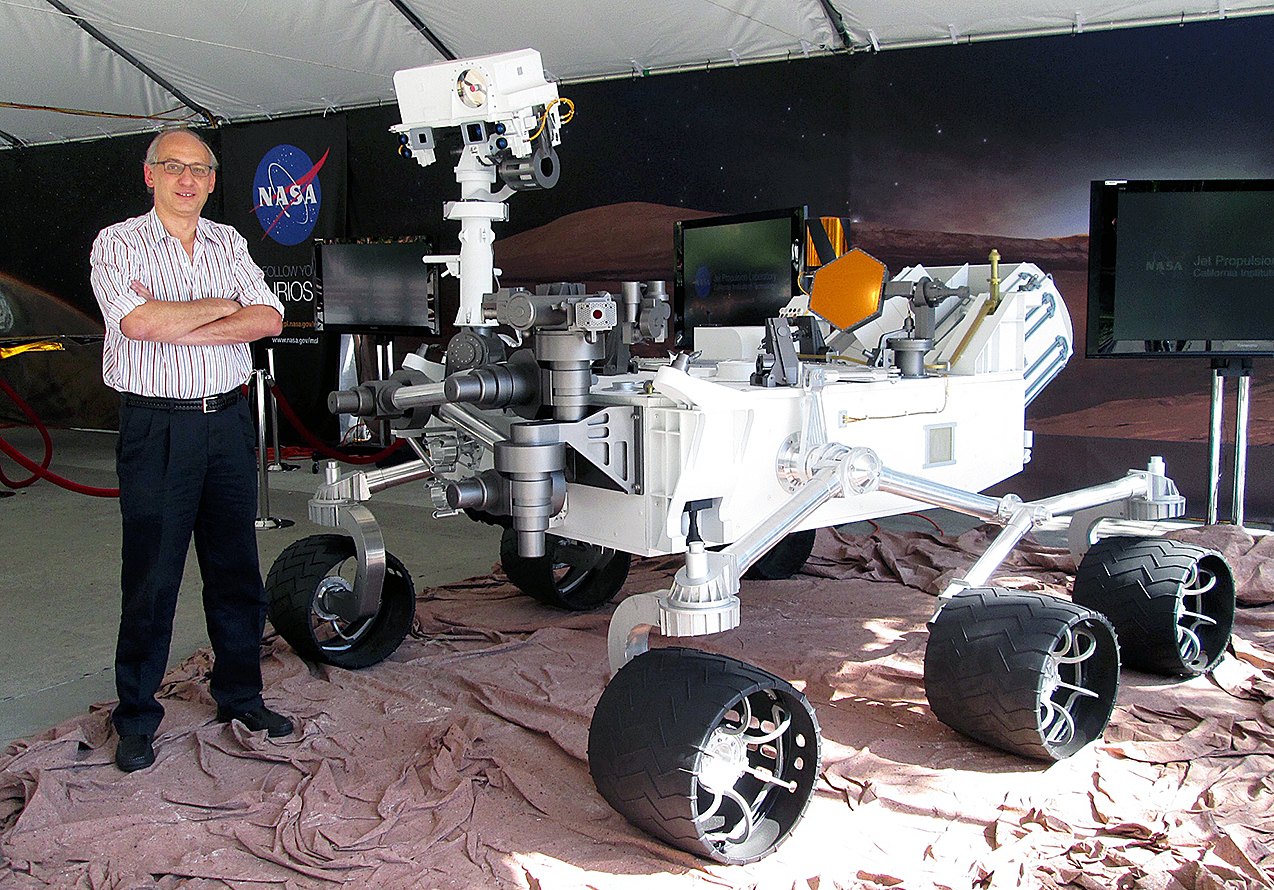 When a spacecraft enters the Martian atmosphere, terror sets in on Earth.

Following a smooth, quiet cruise across the expanse of space, a NASA Mars lander nears its final destination. Eighty miles above the alien surface, the vehicle begins a mechanical metamorphosis as it abandons propulsion and communications systems and begins a turbulent, hypersonic descent. As it falls, its heat shields glow red hot, reaching temperatures over 2,500 degrees, leaving a bright amber streak in its wake. Suddenly, there is a jarring lurch as a massive parachute deploys. The lander’s freefall slows, but it continues to plunge toward oblivion at speeds exceeding 800 miles per hour. Less than six miles from the ground, pyrotechnics pop and spark as the craft sheds its shields to reveal robotic appendages. The craft breaks free from its remaining shell and courageously discards its parachute with a mere half mile to drop. Propulsion rockets spray from all corners of the lander, bracing against a catastrophic collision with the unforgiving ruddy red desert below.

Meanwhile, on Earth, Miguel San Martin ’82 is on pins and needles. For nearly seven minutes, he and his team have been cut off from the vessel that represents countless hours of work and deep commitment. When the spacecraft jettisoned its communications systems upon entering Mars’ atmosphere, it sacrificed all contact with its earthling makers. And so, until it lands (…if it lands) and powers on, there is only silence. San Martin and his team are forced to wait, anticipating a simple beep signaling a successful landing.

After a silence that seems to extend for eternity, their patience is rewarded. The lander sends a simple, calm affirmation across the void. A triumphant beep. When it finally comes, relief and elation course through NASA’s Jet Propulsion Laboratory (JPL) in waves. They’ve landed on Mars.

San Martin has lived through scenarios like this four separate times as a leading contributor to the Mars Pathfinder, Spirit, Opportunity and Curiosity lander missions. Each time, he experienced “seven minutes of terror” as the vehicles executed the landing phase of their mission entirely automatically. All told, he has survived 28 heart-pounding minutes. And each time, he has been rewarded with that glorious beep.

Just 22 years before he experienced the success of the Pathfinder mission, San Martin was a boy in Argentina with sky’s-the-limit dreams. He was fascinated with electronics. He often bombarded his family members with questions about how the equipment on his family’s farm worked or how his radio was able to receive a wireless signal. He was so persistent that they had to take turns answering his barrage of questions.

“My first passion was engineering. From a very early age, I was curious about everything,” says San Martin. “I remember following the Apollo missions and seeing a rocket launch in the news and being fascinated by it. The clincher was Viking, the first mission to land on Mars. I followed it in magazines and over my short-wave radio for years before it was ever launched, but when I saw its first photo from the surface of Mars on the cover of a newspaper, I said, ‘this is what I’m going to do.’”

Upon hearing that his son’s ultimate goal would be to work for NASA, his father recommended San Martin complete his education in the United States. With a poor grasp of the English language and little knowledge of his options in American universities, he set out for Cornell, based on the past success of a family friend who attended there. San Martin completed an English as a second language course there but was not accepted to Cornell’s engineering program. After that disappointment, he had a choice—return home or forge on in an unfamiliar land. He chose the latter.

San Martin pulled out a map and discovered that Syracuse University was near. He bought a ticket for a Greyhound bus and went directly to Syracuse’s admissions office to plead his case. To his delight, he was accepted. By the end of his first year in the electrical engineering program, he was at the top of his class, in love with the community, and content to complete his bachelor’s degree at Syracuse. He met his wife and self-appointed public relations agent, Susan San Martin, at Buggsy’s Back Alley Bar. She studied law at Syracuse and worked a cash register at Peter’s Groceries to pay for tuition.

“Syracuse was the place where I transitioned from Argentine culture to an American way of life,” recalls San Martin. “I didn’t know how to achieve what I wanted to achieve, but after four years, I saw the light at the end of the tunnel. I found out that I could succeed in this culture and in my discipline. I had no idea if I was going to survive a semester. SU showed me that I could do this.”

He graduated summa cum laude and was the Engineering Student of the Year in 1982. His success and the strength of Syracuse’s program set him up for acceptance to graduate programs at Stanford, Carnegie Mellon and MIT. For San Martin, the choice was clear. The Guidance and Control engineers from the Apollo program were at MIT. That’s where he needed to be. After earning his master’s there, he achieved his childhood dream of working for NASA’s JPL. And in his very first job, he worked on the navigation systems for the Magellan orbiter mission to Venus. He has been there ever since. Today, he serves as JPL’s chief engineer of guidance and control. He was recently elected to the National Academy of Engineering, an extraordinary honor for an engineer.

Recently, San Martin was one of the many NASA scientists and engineers saddened by, but ultimately very proud of, the conclusion of the Opportunity Mission, which he landed on Mars. After nearly 14 years of operating on the Martian surface, the rover ceased all contact. For many, it felt like a death in the family.

“When a rover’s mission ends, it’s always very sad, especially for the people who are working on it every day,” says San Martin. “I had a similar experience working on Mars Pathfinder. I was very involved with surface operations, and the rover lived for three months. One day, we came in and sent commands and did not hear back. You develop an emotional attachment.”

San Martin is actively contributing to the technology that will be used in NASA’s future missions, including sending landers to asteroids and Jupiter’s moon, Europa, whose frozen seas may have conditions for evolved life. As one of the most accomplished JPL engineers, he also serves on many review boards for other developing NASA projects. He is currently consulting on the Mars 2020 lander project, which will bring back samples of Mars’ surface.

It is clear that San Martin has many more “minutes of terror” and successful space missions in his future. For that young, curious boy he once was, it is a dream come true. Throughout his continuing journey, through Syracuse and beyond, Miguel San Martin has learned that the sky was never a limit.