‘You’re Only as Good as the Last Meal That You Served’: Food Services and the Annual MLK Celebration 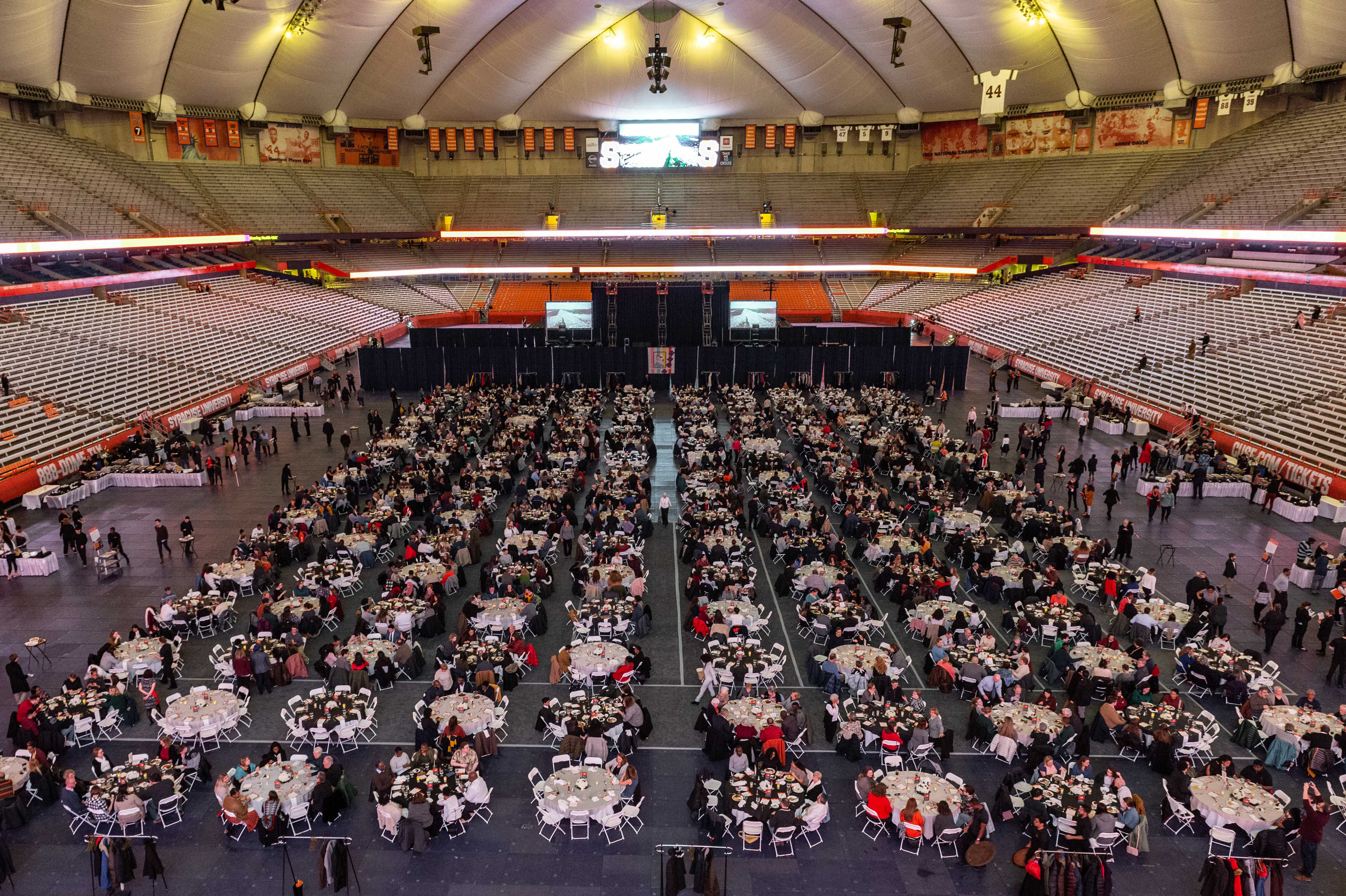 Sunday night in the Dome: a big meal for a big event. (Photo by Evan Jenkins)

Jim Ponzi, associate director of production and commissary operations, started work on Thursday at 7:30 a.m. After a full day of overseeing operations of Syracuse University’s food production, serving an average of 17,000 meals, he worked past midnight. An Orange men’s basketball game against Miami tipped off at 8 p.m., and he stayed to do a final deposit. He returned on Friday morning at 7 a.m. “It’s a life,” said Ponzi. “Well, we say it’s a lifestyle. You get used to it.”

Ponzi and the entire Food Services staff had been preparing for the 34th annual Martin Luther King Jr. Celebration on Sunday. The Food Services management team has extensive experience with the event.

“Now that we’ve done it for so long, it’s not like it’s any big deal,” said Mark Tewksbury, director of residence dining and dome operations. “I’ve done every one of them.”

The Food Services management team has been with the University for several decades. “I started as a student. You know, we all started as students,” Ponzi said.

“I was one of the student workers in this building (Brockway Dining Center),” said Tewksbury.

Though the MLK event is the largest on-campus event of its kind in the country, for Food Services it is just another day. 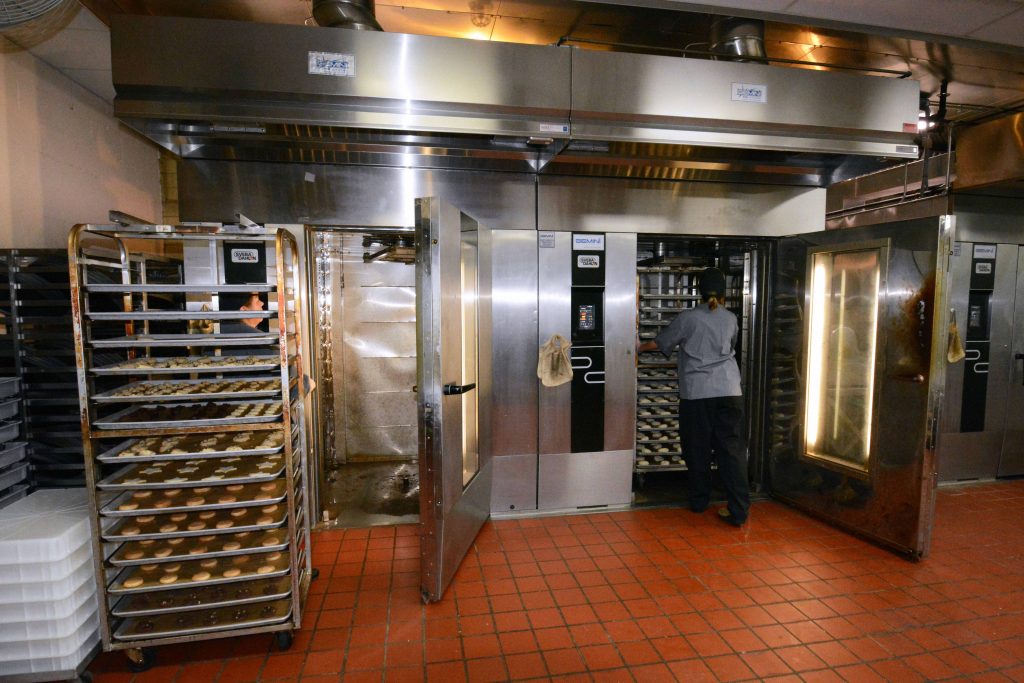 The bake shop at the Commissary. (Photo by Keone Weigl)

“Events of this size require all hands on deck,” said Tewksbury. “Almost our whole department works the event, and we just kind of divide and conquer.”

The MLK event included dinner, musical performances, presentation of the annual Unsung Hero awards and an on-stage conversation with Trevor Noah, host of “The Daily Show” and author of “Born a Crime: Stories from a South African Childhood” (Random House, 2016).

Syracuse University Food Services—a department within Auxiliary Services and part of the Division of Business, Finance and Administrative Services—operates all of the cafés and dining centers on campus. For Sunday, it was responsible for putting together and serving a meal for 1,600 attendees. All while continuing the regular routines—like preparing food for campus events and dining areas; servicing vending machines, ATMs, washers and dryers; delivering and stocking coffee for 350 offices on campus—without interruption.

The MLK Celebration planning process begins in the fall semester. A committee convenes to choose a menu, though the menu has remained relatively unchanged from year to year. “Once we find a spec on a product or a recipe that we like, we keep it,” Ponzi explained.

Around six weeks before the event, Ponzi looked at historical attendance data of the MLK celebration to determine how much food to order. Food ordering is completed with a bid system. As the food arrives to the 55,000-square-foot Commissary warehouse through two sets of loading docks, it is checked in and stored. 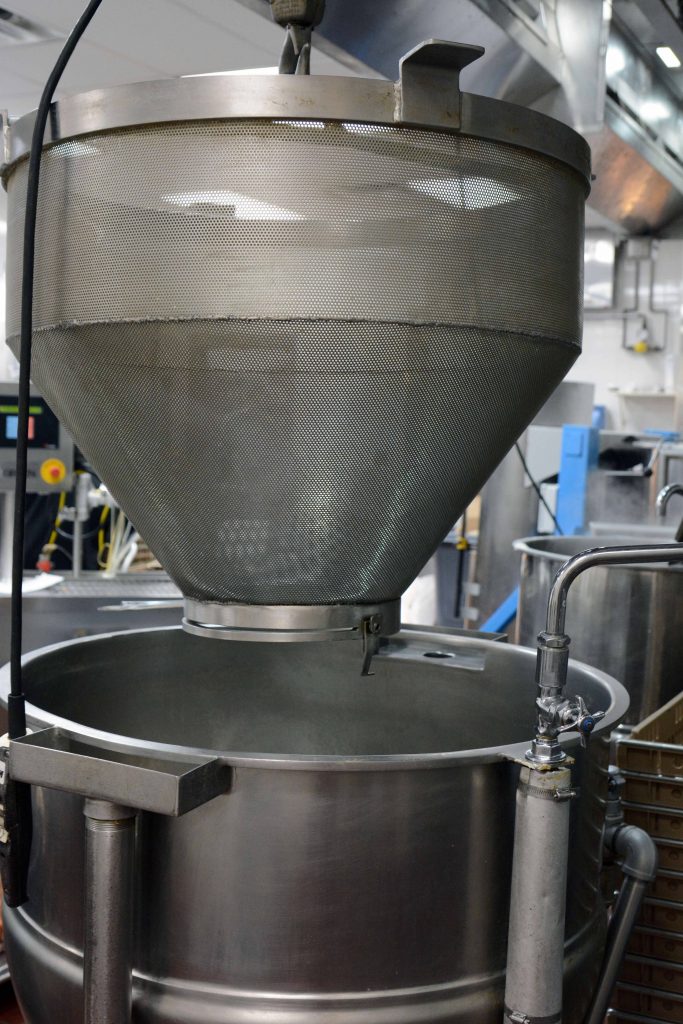 Part of the Cook-Chill facility at the Commissary. (Photo by Keone Weigl)

Two weeks out, food preparation began in the Production Kitchen for use in the Cook-Chill process, also located at the Commissary. The Cook-Chill facility consists of a pair of 100-gallon and 150-gallon kettles that sit adjacent to each other, a filling station, a tumble chiller and a cook tank in a space roughly the size of a classroom. The facility was built in 1992 and allows one person to cook hundreds of pounds of food at a time. “We’re the first university that uses this technology,” Ponzi said.

The Cook-Chill facility is essentially a mini-manufacturing plant, Ponzi explained. Black-eyed peas, all soups, sauces, gravies and macaroni and cheese are prepared in the Production Kitchen and then cooked and chilled in the Cook-Chill facility. The process works like this: food is prepared in the large bowls, pasteurized and stored in individual four- or eight-quart bags (depending on the product). Once the storage bag is sealed, the bag is placed in a tumble chiller. “We get it from 180 down to 45 degrees in less than an hour,” said Ponzi. The shelf life of the food is 28 days when refrigerated; however, if it has not been delivered to campus within 14 days, Ponzi elects to have the food frozen. That ensures the highest-quality product, he said.

Utilizing the Cook-Chill method, black-eyed peas were prepared two weeks before the MLK event. Southern macaroni and cheese preparation began on the Tuesday before the event. A separate day is dedicated to cooking vegan items to avoid contamination, said Ponzi.

In the cook tank, a large rectangular box that resembles a storage freezer, 600 pounds of ribs were cooked. They were later dipped in barbecue sauce by hand and then stored on large trays. They were browned in a large production oven Sunday morning.

Regular food production is still ongoing during the MLK Celebration prep process. “I’ve got an overnight crew that comes in and does all your prepackaged salads, grab-and-go items that you see in our cafés,” said Ponzi. “So, we’re pretty much 24 hours, seven days a week in here.”

Ponzi explained the MLK process last Friday. “So, everything’s been cooked, chilled, ready to go on Sunday,” he said. “First thing that’ll happen Saturday night, we’ll do the sweet potato pies. The bakers will start from scratch, make them, cool them, cut them and pre-store them.”

The sweet potato pies were stored in one of the 22 hot holding cabinets used during the event. The hot cabinets stand around five feet tall and keep food at the correct temperature before serving. 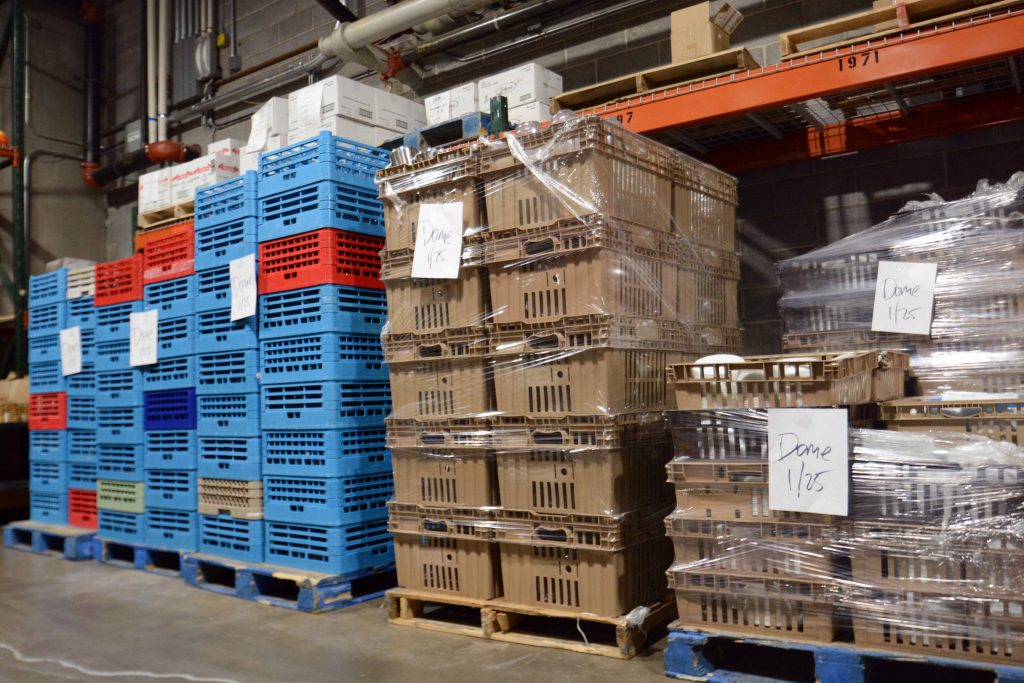 Pallets of prepared food waiting at the Commissary for delivery to the Dome. (Photo by Keone Weigl)

Six bakers continued their work through Saturday night, baking mini corn muffins as well as wheat and white dinner rolls. Normal production also happens overnight, each night, to ensure the freshest baked goods. All donuts hold to Dunkin Donuts specifications. All bagels are done from scratch. The same bakers will produce birthday cakes for people who order them through the SU Bookstore, Ponzi added.

Beginning Sunday at 7 a.m., banana pudding was cooked from scratch. “We’ll start with a mix, peel all the bananas, cut those up, fold the pudding into the cups, cover them. They go in the holding cabinets. The individual puddings will be delivered to the Dome on a truck no later than 1:30,” Ponzi said.

Meanwhile in the Cook-Chill facility, collard greens began to stew. “We’ll add all the seasonings. Those, I’ll let cook all day, just flavor,” said Ponzi. “Last thing of the day, before I head to the Dome, is we’ll empty this kettle. That’ll go in the pans. Everything gets Saran Wrapped. Boom. I’m ready to go.”

While this process was happening, a predetermined oven rotation schedule ensured all items were cooked and placed in hot holding cabinets by no later than 2:30 p.m. “They’re doing the creole beans and rice, oven rotation with the chicken with the ribs. They’re taking final temperatures, loading the hot boxes (cabinets),” said Ponzi.

A truck driver loaded the food into his truck. Ponzi followed him to the Dome and called ahead to have any available set of hands meet him at the loading dock. Food was unloaded and kept in a staging area.

In the week prior to the MLK celebration, 1,600 china place settings were retrieved from the rafters of the Commissary warehouse. The plates, flatware, cups and glasses are only used a couple times over the course of the year, Ponzi said. The place settings were all washed and organized onto 12 pallets. The pallets of flatware were delivered via box trucks to the Dome on Friday.

Tewksbury and Bracy work together to manage the front and back end operations at the Dome during the MLK celebration.

Starting on Thursday night, Tewksbury and his staff worked until around 1 a.m. breaking down concessions equipment after the men’s basketball game.

The next day, they set up 160 tables and 1,600 chairs on the Dome’s floor. Large bundles of linens were left on the tables for setup on Saturday. 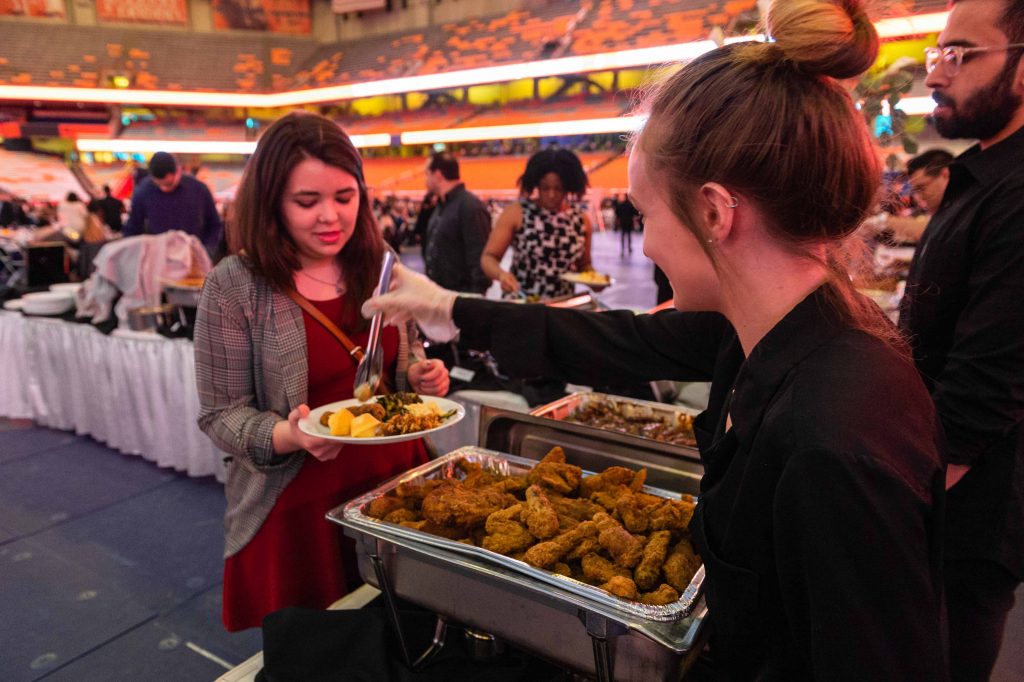 Serving the meal at the MLK Celebration dinner Sunday night in the Dome. (Photo by Evan Jenkins)

While Tewksbury’s concessions department helps behind the scenes with the kitchen work and getting the equipment in and out of the building, Bracy manages the actual service of the dinner, setting the tables, serving the people and cleaning up.

Lisa Gasque, catering events manager, was at the Dome on Friday organizing to help make “setup on Saturday smooth, streamlined and efficient.”

“I have a crew here today that’s getting all the components ready,” she said. “Tomorrow I can assign jobs and everyone knows what they’re doing. Efficiency is the key right now.”

Setup typically lasts six to eight hours on Saturday, with staff covering tables with linens and placing flowers, Bracy explained. Buffet lines were also set up on Saturday. A student staff of more than 80 helped with setup, service and cleanup. In addition, more than 20 managers and supervisors joined more than 30 union staff, including truck drivers, cooks, prep staff and catering event helpers.

On Sunday, Gasque had organized staff into areas of responsibility.

“We have food runners, buffet servers, clearers,” said Gasque on Friday. “I have mapped it all out.”

Gasque also has a wide variety of experience with the MLK Celebration. “This is my sixth one. I’ve been through every phase of it, where I was just a worker, then a supervisor and now as a manager,” she said. “Last year was my first solo run as manager. It went great. But I learned simple little things, and now it’s a no-brainer.”

Once the program concluded, the staff set up a staging area to begin clearing plates.

“Once the program’s over, they turn the lights on, we’ll clear the floor in about 40 minutes,” Tewksbury predicted on Friday.

The Dome floor was reset for basketball on Sunday night.

The dirty dishes were palletized and brought back to the Commissary, and a crew worked overnight washing them. The dishes must be cleaned immediately because day-to-day equipment still needs to be cleaned as well, Ponzi explained. By then, they’re already preparing for the next big event.

Because, he stated, “You’re only as good as the last meal that you served.” 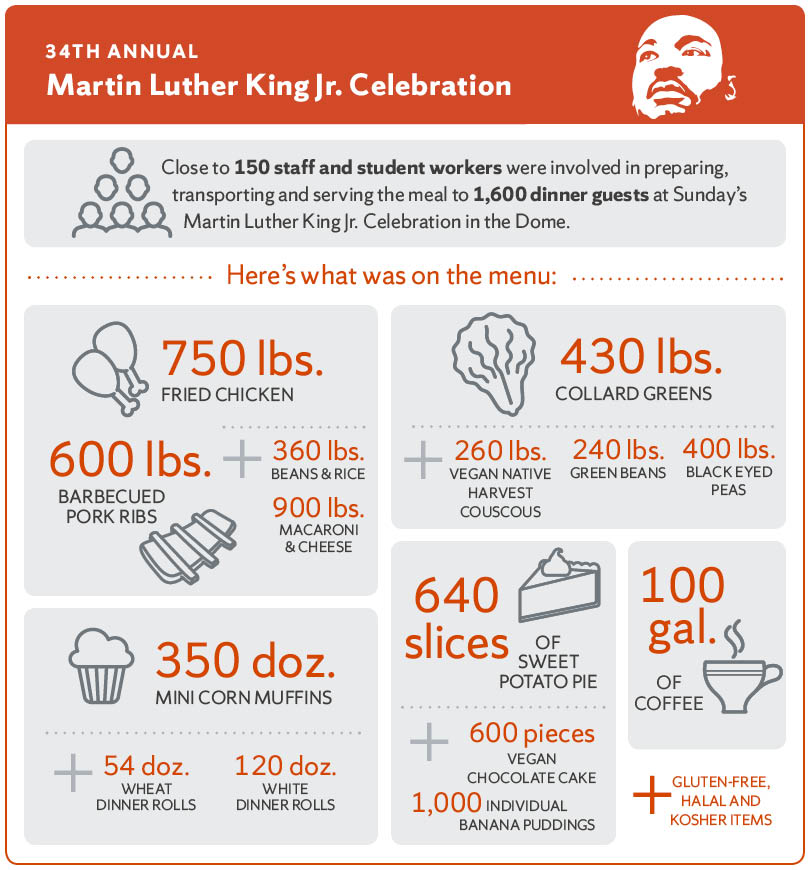