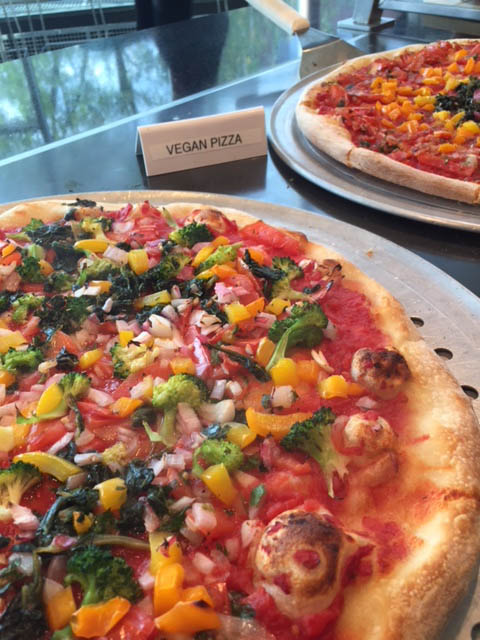 Vegan pizza is among the options offered in the University’s dining halls.

For the third consecutive year, Syracuse’s dining centers have received an A+ rating from PETA (People for the Ethical Treatment of Animals), placing Syracuse University on the Dean’s List in PETA’s college rankings. According to VeganReportCard.com, “The Dean’s List includes an elite group of institutions that have accrued enough Vegan Report Card points to rank among the highest tier of A-rated schools. They are the vanguard when it comes to vegan cuisine on campus.”

Criteria for grading include:

Ruth Sullivan, SU Food Services Registered Dietitian, says that SU Food Services goes above and beyond these guidelines. “Each dining center has a large area dedicated to vegan foods. Besides our featured entrées, we serve a variety of grain salads, pizza, deli items and dessert. Our menu committee continues working to eliminate as much processed vegan foods as possible in order to keep the selections fresh and exciting,” says Sullivan.

Emily Gibbs, a junior majoring in nutrition, has been a vegan since she was a senior in high school. Before she came to Syracuse University she was concerned that being vegan would mean not having enough food choices. On the contrary, she says, “I was pleased and surprised at the abundance of vegan food. Plus, I love it. Every time I go into the dining center, I find a new vegan food that I like.” Gibbs’ favorite vegan foods at the dining center include falafel, coconut encrusted tofu, pigeon peas and anything with seitan.

“Food Services is also great about labeling all the food so I know exactly what foods are vegan. Whenever I have a question, the staff is very accommodating,” says Gibbs.

The staff in Food Services welcomes student feedback. If you have a vegan recipe you would like to see offered in the dining centers, email it to mealtalk@syr.edu for consideration by the menu committee. To see the vegan options offered daily in the dining centers, visit foodservices.syr.edu. Under “Nutrition” click “Daily Menu and Nutritional Analysis.”

To show appreciation and celebrate its faculty and staff, Syracuse University is offering a chance to win two game tickets and complimentary transportation to cheer on the Syracuse football team in the Bad Boy Mowers Pinstripe Bowl. The bowl game…