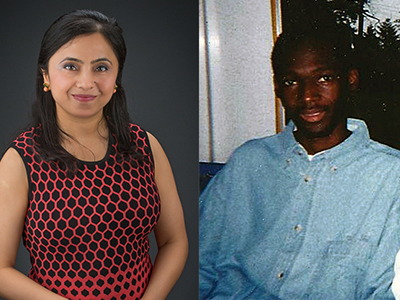 When Smita Narayan G’00 arrived at Syracuse University to begin her master’s degrees in civil and computer engineering, she felt out of her element and overwhelmed by the University and life in a new country. It was her first time living away from her home country of India, and she didn’t know anyone outside of the College of Engineering and Computer Science (ECS) Admissions staff. That all changed when she met a young man who was in a very similar situation. Mambu Alphan Kawa G’99, a fellow international graduate student, had arrived from Sierra Leone just a year before. Their friendship help defined Narayan’s Syracuse experience and gave her an outlook on life that has contributed to her success.

Narayan and Kawa met when they were assigned to a shared office space while working together in a geotechnical research lab. They became fast friends as they tackled the challenges of master’s courses and research.

“Mambu was easygoing and had a great sense of humor,” recalls Smita. “No matter how grim things felt, he could always make me laugh. He was very bright, a great collaborator, and particularly sharp with tech despite having minimal experience with it before coming to the U.S. That inspired me to take on an additional degree in computer engineering.”

Kawa’s friendship also encouraged Narayan to break out of her shell and become more active on campus. While at SU she was a teaching and research assistant. She also helped revive the Syracuse Chapter of Society for the Promotion of Indian Classical Music and Culture Amongst Youth and became a member of Phi Beta Delta, the honor society for international scholars.

Following graduation, Kawa and Narayan kept in touch from time to time by phone. However, as the years went by, they lost touch as their attention turned toward developing their promising young careers. He went on to become a civil engineer and obtained the Professional Engineer designation, eventually working for Dewberry. She went on to work for Autodesk where she helped shape key features of a civil engineering design software from inception through product launch and beyond. She is currently a lead software engineer at Cimpress after establishing her career at Autodesk and Vistaprint.

After a few years apart, Narayan attempted to find Kawa again. An internet search turned up shocking news. Sadly, Kawa had passed away in the time since they last spoke. He had died at the age of 34 in 2006.

“I couldn’t believe he was gone. Part of me still can’t,” says Narayan.

In the weeks following the tragic revelation, Narayan began to think of ways she could honor Kawa and their friendship. She recalled that she and Kawa had both received scholarships that enabled their studies at SU.

“We both experienced first-hand how it can remove barriers,” she says.

Narayan reached out to faculty in the Department of Civil and Environmental Engineering, and officially established a $15,000 scholarship in Mambu’s name. It is set to be distributed in the amount of $1,000 per year to a student studying civil or environmental engineering and will be awarded for the first time this spring to Christopher Harvey of Delmar, New York—an environmental engineering freshman and member of the Renée Crown University Honors Program.

Narayan hopes that her gift will alleviate the cost of education for many in the coming years. She also hopes that its recipients will look to Kawa and his legacy of kindness and humor for inspiration when things become difficult just as she did many years ago.

She says, “Mambu taught me that life can be beautifully simple and it should not be carried forth with pain and strain. It is a lesson that has been very valuable to me, and I believe it can help others.”