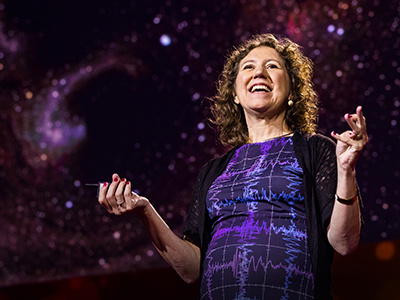 For Gabriela González G’95, life is a honeymoon—to quote a recent country hit. No sooner had the renowned physicist returned from her own honeymoon than she and her husband, fellow Argentinian theorist Jorge Pullin, moved the party to Syracuse in 1989. Swapping modest digs in Central Argentina for similar ones in Central New York, the newlyweds found themselves at the future epicenter of gravitational-wave astronomy.

At Syracuse, Pullin worked as a postdoc, while González chipped away at a Ph.D., mastering the finer points of spacetime measurement—a mathematical model supporting Einstein’s general theory of relativity, which posits that Earth’s rotation warps space and time.

Spacetime also underpins González’s prize-winning research into gravitational waves, which are invisible “ripples” caused by the collisions of dense, massive objects, such as black holes.

From 2011-17, González was spokesperson of the Laser Interferometer Gravitational-Wave Observatory (LIGO) Scientific Collaboration, an international community of researchers that hunts for gravitational waves. González’s involvement with LIGO led to her induction into both the National Academy of Sciences (NAS) and the American Academy of Arts and Sciences, as well as her inclusion on Nature magazine’s 2016 list of 10 people who matter in science. 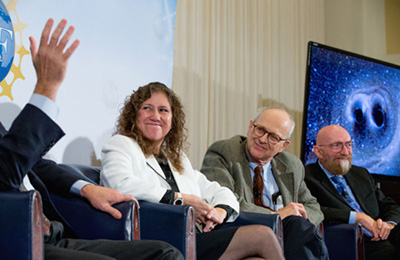 González beaming at the 2016 announcement of LIGO’s detection of gravitational waves.

“Jorge and I like to think we have proven Einstein wrong, since he said his theory was not to blame for people falling in love,” jokes González, who, along with Pullin, is on the physics faculty at Louisiana State University. “When I was at Syracuse, I never thought that learning how to measure spacetime would make scientific history. It’s rewarding to do what you love.”

The College of Arts and Sciences (A&S) recently caught up with González, who admits that her honeymoon is far from over. 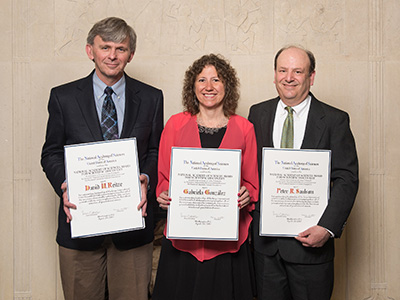 What have we learned about gravitational waves since their detection three years ago?
They are not as rare as expected. Nature is very generous, and large black holes [whose primordial collisions give off gravitational waves] seem to find each other a lot. Our study of gravitational-wave astronomy has begun with a bang.

A Big Bang, literally [as gravitational waves offer clues about the early universe]. What’s next for gravitational-wave research?
A year ago, I would have said it was detecting a collision of neutron stars with electromagnetic counterparts. We saw that, however, in August of 2017, much earlier than expected.

The next big thing could be the discovery of a periodic signal from a rotating star in our galaxy, or, if I had to dream, a signal of unknown origin.

You are close to Peter Saulson [the Martin A. Pomerantz ’37 Professor of Physics in A&S], who, like you, was a spokesperson for the LIGO Scientific Collaboration. What have you learned from him?
Peter joined the Syracuse faculty in 1991, not long after I started my doctoral research there. In fact, I was his first Ph.D. student at Syracuse. He showed me that spacetime is not just mathematical abstraction; it is something real and measurable.

Peter is part of a strong group of researchers who are enthusiastic about these measurements. His passion is inspiring. At Syracuse, he was a caring advisor who patiently taught me a lot about conducting experiments.

You recently were elected to membership in the National Academy of Sciences. What does that say about your work?
At first, I didn’t feel like I belonged to this esteemed group of people, which advises the federal government on scientific matters. After I joined, I began to appreciate the broad spectrum of their activities, particularly in areas of science literacy and diversity.

Did you know Stephen Hawking?
I spoke at a public symposium for his 75th birthday at the University of Cambridge [in July 2017, less than a year before his death.] Dr. Hawking not only delivered a moving public talk, but also said he liked mine.

Afterward, he gave me a copy of his autobiography, with his thumbprint on one of the pages. The page was from a chapter in which he discussed trying to make, albeit unsuccessfully, a gravitational-wave detector in the Seventies. We had a good laugh over it.

How do you feel about being a role model for young women and Latinas?
I want to show them that not all physicists are geniuses—or are male, gray haired, or eccentric. Most of them are fairly normal people.

We need to make sure young boys and girls don’t buy into the “mad scientist” stereotype. Instead, they need to understand that contributions to science—or any field, for that matter—require curiosity and hard work. This approach has served me well.