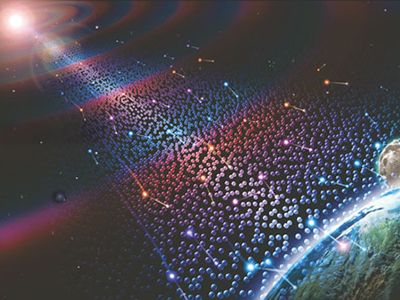 An artist’s conception of a stream of neutrinos hitting Earth.

Physicists in the College of Arts and Sciences (A&S) are playing an important role in a multinational neutrino experiment that could lead to major breakthroughs in the study of the universe.

Mitch Soderberg, associate professor of physics, oversees a group of researchers in A&S studying neutrinos—tiny, elusive particles that hold clues about the origin of the universe. His group has led the U.S. effort to build two major components for an experiment at the Department of Energy’s Fermilab, a high-energy particle physics laboratory near Chicago.

“Unlocking the properties of neutrinos may explain how the universe works and why matter exists at all,” Soderberg says. “The technology we develop to perform our research could benefit areas such as homeland security, industry and workforce development, to name a few.” 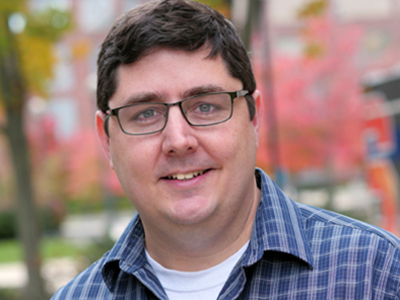 With the SBND project, Soderberg’s group makes important contributions to SBN detectors, having previously helped build components at Syracuse for the MicroBooNE detector. The SBN program focuses on neutrino oscillation—the process by which neutrinos change flavors, or types, as they hurtle through space and matter at essentially the speed of light.

The Standard Model, which explains how fundamental particles interact with one another, posits that neutrinos occur in three flavors. SBN is searching for evidence of a fourth flavor, called sterile neutrinos.

Soderbeg hopes confirming the existence of these infinitesimally small, sterile particles will help him and other scientists answer questions about the universe that the Standard Model cannot.

“While really big questions, such as ‘Why is there more matter than antimatter in the universe?,’ are driven more by intellectual curiosity than practical application, they stretch our understanding of the way the universe functions,” he says. “Perhaps along the way we will devise new technologies that have applications beyond the realm of particle physics.”

Eric Schiff, professor and chair of physics at Syracuse, is excited about the research, saying the existence of “ghostly” sterile neutrinos might explain phenomena such as dark matter—invisible material that makes up 25 percent of the universe, but does not emit light or energy.

“Every particle physicist on Earth would love to be part of the team that does an experiment with results beyond the Standard Model. If found, sterile neutrinos would be just this type of experiment,” he adds.