Millions of people around the world with mobility challenges have trouble standing up from a chair or couch. During the Invent@SU program in summer 2017, communications and rhetorical studies major Kalia Zizi Barrow ’17 and mechanical engineering major Ruby Batbaatar ’19 had an idea for a device that could help.

“We were really thinking about aging populations and the activities of daily life,” says Barrow.
“It might seem like a small part of human life, but for those who are mobile we don’t really notice how big of an issue this is for many people,” says Batbaatar.

The two started thinking about inflatable solutions very early on during the six-week Invent@SU program.

“Inflatable technology allows our design to be lightweight, versatile, and comfortable” Barrow says. 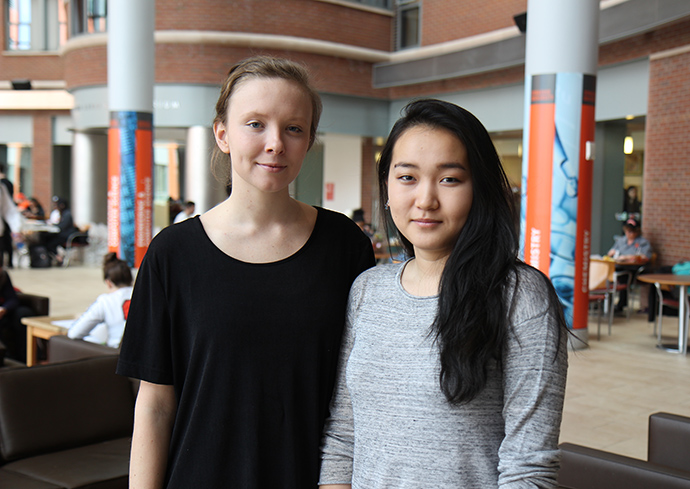 They designed, prototyped and pitched a product called Pneu-Strength. It is a portable, inflatable cushion that can be installed in a person’s favorite chair or couch. At the touch of a button, the cushion gently inflates and helps the person safely rise to a standing position.

“The number of Americans aged 65 and older is projected to more than double from 46 million today to 98 million in 2050,” Barrow says.

“We want all those people to be independent and happy—performing the daily task of standing up and sitting down,” Batbaatar says.

Barrow and Batbaatar took second place at the 2017 Invent@SU session in New York City and were encouraged to move forward with their project. After more work on their prototype, they decided to enter the New York State Department of Health’s Aging Innovation Challenge. The challenge was open to all undergraduate and graduate students attending a college or university in the state.

After working with the Blackstone LaunchPad in Bird Library to polish their presentation, the pair advanced to the Aging Innovation Challenge finals and presented their device to a panel of judges in New York City, including New York State Health Commissioner Dr. Howard Zucker and SUNY Chancellor Kristina Johnson.

Ultimately, the judges choose Pneu-Strength as a co-winner of first prize. Barrow and Batbaatar received a $17,500 award.

“This validation and support is sending us on the path to move forward,” Barrow says. “Our next steps include expanding our team and obtaining a patent for Pneu-Strength.”

Barrow and Batbaatar are grateful for the Invent@SU program that gave them their start as entrepreneurs.

“Everything would’ve been impossible without Invent@SU. I never imagined myself starting a business, especially in college, but Invent@SU opened an opportunity for us to solve a real-world problem,” Batbataar says. “The program provided resources, feedback and an environment that helped us develop our design. I think Invent@SU is one of SU’s crucial programs that brings out a lot of potential in students.”

“We were fortunate to participate in Invent@SU as it gave us the time, space and expert support for coming up with the idea and refining it,” Barrow says.
Barrow and Batbaatar are open to considering new team members who can help advance the Pneu-Strength project. Anyone who’s interested may email them at pneustrength@gmail.com.