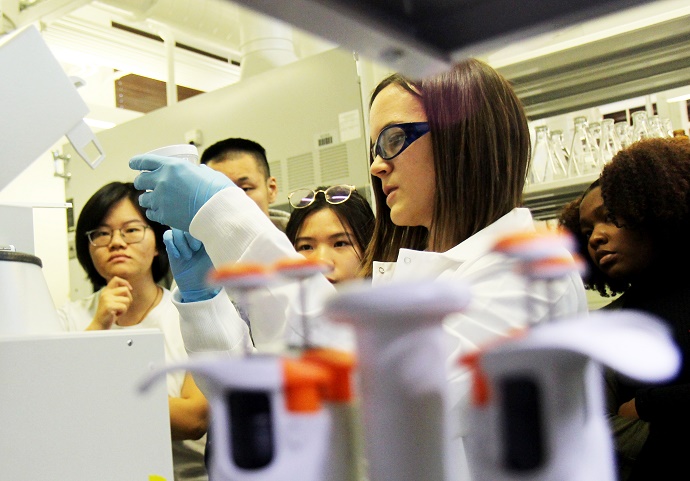 Despite advances in medical technology, millions of people around the world still bleed to death after being shot or experiencing other traumatic injuries. Many of those deaths occur before the victims ever reach a hospital.

To address this, Assistant Professor Mary Beth Browning Monroe in the College of Engineering and Computer Science is developing a first-aid, biocompatible foam that promotes rapid blood clotting in large wounds. She recently obtained $427,000 in funding for the project through the Air Force Defense Research Sciences Program.

“Professor Duncan Maitland first developed this technology at Texas A&M 20 years ago as an aneurysm treatment. While working in his lab, my job was to think of new applications for the foam. I was shocked by the number of people who still die from bleeding, so my focus became customizing the foam to treat large wounds, such as gunshots,” says Monroe.

Monroe’s foam is a shape memory polymer, meaning it can take different shapes when heated, cooled or manipulated. Similar in appearance to the sponge in your kitchen sink, Monroe’s foam can be compressed and inserted into deep, tunneling wounds. Once implanted, it heats up to body temperature and expands to fill the injury. Its combination of chemistry and porous structure promotes rapid clotting and stops the bleeding.

“I dream that this will become a part of the average first-aid kit—inexpensive, easy-to-use and widely available,” says Monroe. “I could be made available to everyone, no matter where you are or who you are, and prevent a lot of deaths.”

There are similar alternatives to Monroe’s solution; however, they tend to rely on applying pressure in the wound. Her foam not only patches the injury but promotes healing as soon as it is inserted. She is also working on incorporating functionalities such as a honey-based antimicrobial component to ward off infections and making the foam biodegradable so that it never needs to be removed.

Monroe says, “My goal now is the to get the basic formulation out there as quickly as possible. I’m gathering the data I need to show that it is safe and effective, including FDA approval. From there, I’ll continue to work on additional capabilities in future generations of the technology.”

Once approved for use, the technology would have clear military and commercial applications. One day, Monroe’s work could lead to a new, standard form of first-aid that significantly decreases the number of bleeding deaths around the world.