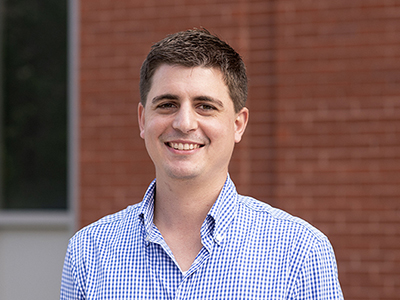 Forbes magazine has recognized an alumnus of the College of Arts and Sciences (A&S) for his contributions to the study of molecular movement.

Michael Ruggiero, who earned master’s and doctoral degrees in chemistry in 2014 and 2016, respectively, is a member of Forbes’ “30 Under 30” Class of 2019, highlighting 600 young stars in 20 different industries throughout North America.

The 28-year-old Burlington, Vermont, resident is an assistant professor of chemistry at The University of Vermont (UVM), where his cutting-edge research has earned him a place in the “Science” category of “30 Under 30.”

Ruggiero’s binary approach to the study of matter—specifically, the movement of atoms and molecules—combines experimental and theoretical techniques, resulting in materials whose properties benefit science and engineering.

“In everything around us, even in things as solid as a rock, atoms and molecules are constantly moving,” says Ruggiero, who trained under Professor Timothy Korter at Syracuse. “My research is geared toward understanding these movements, which impact the properties of materials. This goes from the very basic to the very applied.”

Ruggiero relies on vibrational spectroscopy to follow particles inside a molecule. “We apply light in the form of infrared radiation to see precisely where their motions occur. Afterward, we use computational tools to pinpoint the motions that correspond to the experimental results we have obtained,” he continues.

Already, his insights into the vibrations of atoms are a boon to the pharmaceutical, telecommunications and renewable energy industries. Ruggiero is particularly proud of how he has helped “pharma” understand the causes of drug degradation.

He also has improved the way semiconductors work in flexible displays (e.g., curved screens on computer monitors, televisions and phones), and has shed light on the mechanical properties of gas storage materials in hydrogen fuel cells.

“Atomic vibrations play a pivotal role in everyday life, from dictating the mechanical response of materials, such as how stiff or rubbery something is, to determining the stability of materials, such as pharmaceuticals,” says Ruggiero, whose expertise encompasses physical and computational chemistry, as well as materials science. “Our lab currently is investigating materials that capture and store greenhouse gases, as well as impact long-acting, extended-release drugs.”

Ruggiero traces his unique aesthetic to Syracuse, where Korter—a department chair known for his dutiful, cadenced study of the physical characteristics of molecular solids—instilled in him an appreciation for basic and applied research.

“He was one of the most productive students I’ve ever had,” says Korter, citing Ruggiero’s broad scientific interests and ability to bring demanding projects to fruition. “His idea of ‘relaxing’ is doing  three projects at once, instead of four. I am excited to see what he will produce in his own laboratory in the years to come.”

The co-author of nearly 25 science papers in top-tier journals, Ruggiero applauds Korter and A&S Dean Karin Ruhlandt (a Distinguished Professor of Chemistry) for teaching him the “nuanced aspects” of contemporary research.

“Being on the ‘30 Under 30’ list is a testament to all the great education and support I have gotten throughout my career, especially from Syracuse. It serves as a bastion for my own career goals: to inspire students the same way I was inspired,” Ruggiero says.