Professor Vir V. Phoha of the College of Engineering and Computer Science (ECS) has been named a Fellow of the American Association for the Advancement of Science (AAAS). He was awarded this prestigious honor for developing practicable foundations of behavioral biometrics for active authentication and for exemplary contributions to training the next generation of students. 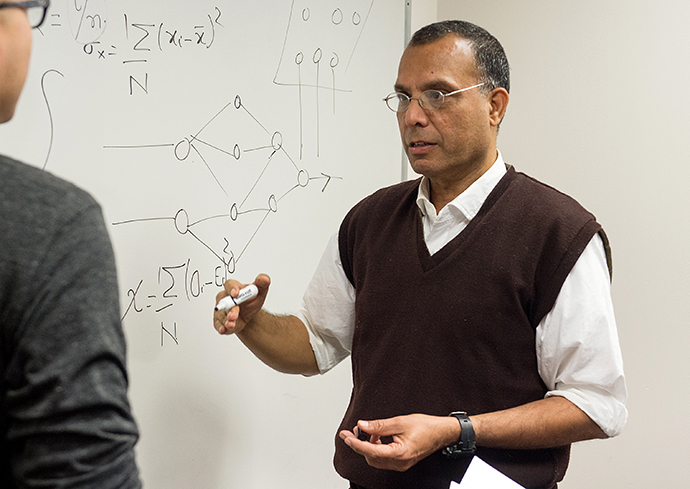 Election as an AAAS Fellow is an honor bestowed upon AAAS members by their peers for scientifically or socially distinguished efforts to advance science or its applications. Phoha and his fellow honorees will be presented with an official certificate and a gold and blue rosette pin (representing science and engineering) in February at the AAAS Fellows Forum during the 2019 AAAS Annual Meeting in Washington, D.C.

Phoha’s research focuses on offensive and defensive cybersecurity, machine learning, smartphone and tablet security, and biometrics. He pioneered the field of spoof-resistant active authentication—a non-intrusive, extra layer of defense for accessing mobile devices. This includes the use of biometrics—authenticating access based on a smartphone user’s keystrokes, gait, swiping and even patterns in their brain activity.

His algorithms and prototypes protect many financial, military and classified information systems. Before his work, the field of behavioral biometrics was mostly theoretical. His inventions have resulted in the widespread commercial use of active authentication.

Phoha is also an Association for Computing Machinery Distinguished Scientist and a Fellow of the Society for Design and Process Science. His work is funded by the likes of the National Science Foundation, the Federal Bureau of Investigation and the Defense Advanced Research Projects Agency. In 2017, he received the Institute of Electrical and Electronics Engineers Region 1 Technological Innovation in Academics Award for his contributions to authentication using behavioral biometrics.

“Dr. Phoha is a leading mind in computing and cybersecurity,” says ECS Dean Teresa Abi-Nader Dahlberg. “His work is vital in our society where mobile devices are ubiquitous and valuable information must be protected from ever-evolving attacks. Our students are fortunate to learn from such a first-rate educator. His recognition as an AAAS Fellow is well-deserved.”

The tradition of AAAS Fellows began in 1874. Currently, members can be considered for the rank of Fellow if nominated by the steering groups of the association’s 24 sections or by any three Fellows who are current AAAS members or by the AAAS chief executive officer. Fellows must have been continuous members of AAAS for four years by the end of the calendar year in which they are elected. AAAS Fellows’ lifetime honor comes with an expectation that recipients maintain the highest standards of professional ethics and scientific integrity.