Nuclear power plants supply more than 30 percent of the world’s electricity, helping reduce our reliance on fossil fuels. However, with nuclear reactors operating around the globe, treating the waste they generate is an ongoing concern. For the past six years, Lawrence Tavlarides, professor of biomedical and chemical engineering in the College of Engineering and Computer Science (ECS), has led research focused on capturing radioactive gases, such as iodine and organo-iodides, that are emitted when treating nuclear waste so that they can be stored long term and safely.

“We have many nuclear power plants. They have to treat spent nuclear fuel,” Tavlarides says. “These gases are emitted in proposed treatment processes. We want to capture the gases, so they don’t get into the environment and harm people.” 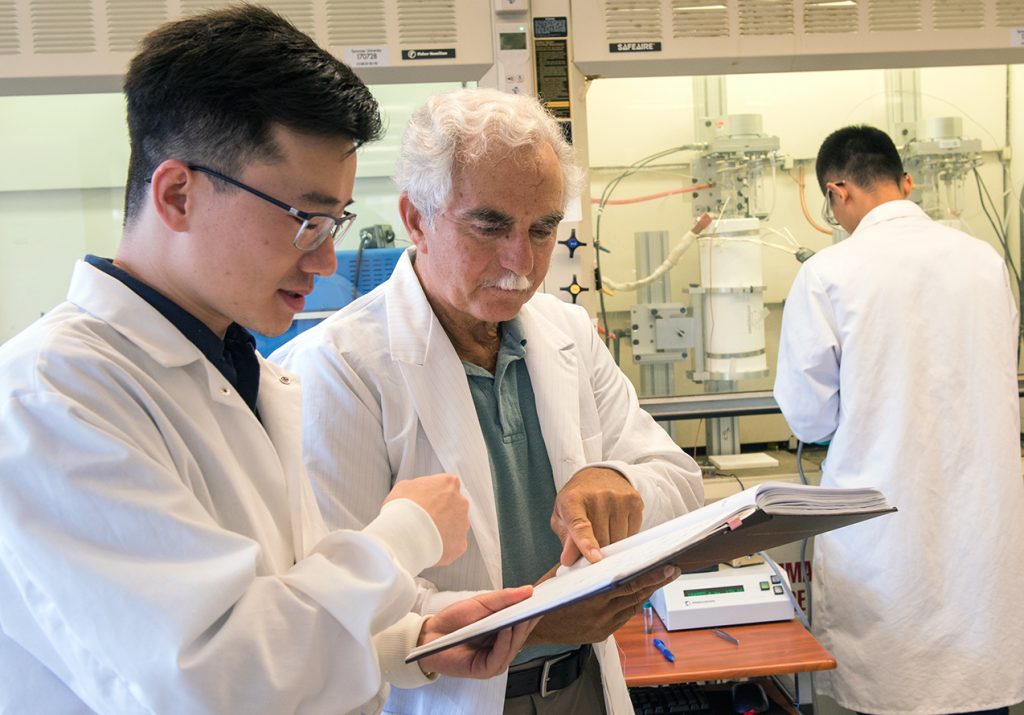 Professor Lawrence Tavlarides (center) with students in his lab.

This fall, the Department of Energy (DOE) awarded a grant of $799,548 to Tavlarides. The DOE grant co-funds a collaborative effort with Sotira Yiacoumi of the Georgia Institute of Technology (GIT) and Costas Tsouris of Oak Ridge National Laboratory to continue their work in this area for the next three years. The new grant is focused on organic iodides and overlaps with another current DOE grant focused on adsorbent behavior with various gases. Both are funded by the Nuclear Energy University Program.

Tavlarides’ laboratory features a specially designed exhaust system and the necessary equipment to test the gas adsorption capacity of pellets to be used in process units that capture radioactive gases released during the treatment of nuclear fuel waste. The researchers—Tavlarides’ Ph.D. students Seungrag Choi and Siqi Tang—flow gases containing iodine through columns containing tiny pellets made of silver mordenite, silver aerogel or silver alumina. The researchers then measure the efficiency of the various pellets in adsorbing the gas.

“The intent is to develop an adsorption process to adsorb the iodine gas in these pellets and then contain it so that it could be placed in long-term repositories,” says Tavlarides, who is in his 36thyear at ECS. In a real-world scenario, the pellets that adsorb the iodine would be placed in concrete mesh and then stored in an underground repository.

The GIT contingent of the collaborative team is developing computer codes to model the adsorption processes in fixed-bed adsorbers and incorporates the pellet adsorption models developed at SU. These models will then be used to predict the capacity of adsorption columns to capture the radioactive iodine and other released gases when treating nuclear waste.

Tavlarides says he is optimistic about the project. “We’ve been at it for some time with our collaborators. We will make a contribution towards it that will be valuable to our colleagues and nuclear waste processing throughout the U.S.,” he says. “It’s important work. It’s a huge endeavor.”