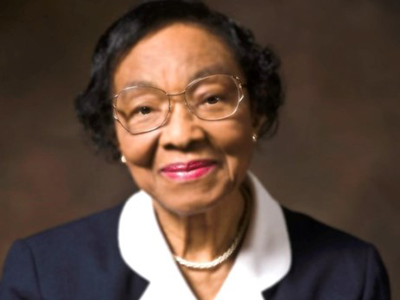 In honor of the one-year anniversary of the death of Rubye P. Torrey G’69, the College of Arts and Sciences (A&S) pauses to remember one of its most illustrious alumni.

Torrey, who died on Oct. 26, 2017, at the age of 91, was the first African American woman to earn a Ph.D. in analytical chemistry from Syracuse. Her career as a professor, researcher and administrator advanced the field of radiation-electroanalytical chemistry. She was particularly interested in research ethics, food chemistry and the electroanalysis of drinking water and human head hair.

Next spring, the University will mark the 50th anniversary of Torrey’s graduation with a plaque dedication ceremony.

A&S Dean Karin Ruhlandt, who prepared remarks for Torrey’s memorial service, says almost any discussion about the Tennessee native includes the word “pioneer.” “Rubye succeeded in a field that was—and remains—overwhelmingly male-dominated,” explains Ruhlandt, also a Distinguished Professor of Chemistry. “By defying the narrow stereotypes of race and gender, she inspired generations of women to don their lab coats. I was one of them.”

Torrey (bottom row, far right) as a faculty adviser at Tennessee State University, where she earned bachelor’s and master’s degrees in chemistry.

Born and raised in a small Tennessee town, Torrey developed an appetite for chemistry at an early age. She found her way to Tennessee State University (TSU) in Nashville, where, as a master’s student, she devised a method for determining incipient spoilage in fruits and vegetables indigenous to Tennessee. Her project was sponsored by the Tennessee Valley Authority.

Torrey was in her late 30s when she enrolled at Syracuse as a Ph.D. student. From 1963-68, she balanced life as a wife, mother, student and teaching assistant. Among her accomplishments was the development of a mechanism that decomposed hydrogen sulfide, then a little-understood toxic, flammable gas. The discovery prompted her induction into Sigma Xi, The Scientific Research Honor Society—one of the oldest and largest organizations of its kind.

That Torrey pursued a Ph.D. amid the racial tension of the 1960s made her achievement all the more remarkable. “Our acceptance as scientists is what is needed,” she told author Diann Jordan in “Sisters in Science: Conversations with Black Women Scientists on Race, Gender and Their Passion for Science” (Purdue University Press, 2006). “We do not need to be viewed as black scientists or Negro scientists or African American scientists; we need to be accepted simply as scientists. None of the adjectives are needed.”

Torrey’s time at Syracuse cleared the way for a postdoctoral fellowship at Brookhaven National Laboratory, followed by a visiting appointment at the National Institute of Standards and Technology. Torrey eventually returned to TSU, where she founded an annual research symposium (now in its 40th year), established a research laboratory in gaseous ion chemistry and opened a local Sigma Xi chapter. She concluded her career at Tennessee Technological University in Cookeville as a professor emeritus and assistant vice president for research.

“As a daughter of A&S, Rubye embodied the ideals of a liberal arts education. She thrived on strategic thinking, creative problem solving and effective communication,” says Ruhlandt, adding that Torrey was one of the first African American women inducted into the American Chemical Society. “We are better for having known her.”