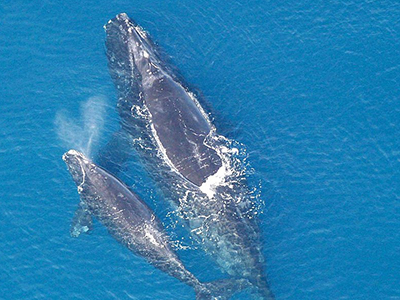 In response to the dwindling number of North Atlantic right whales, researchers in the College of Arts and Sciences (A&S) have conducted a major study of the surface and acoustic behaviors of right whale mother-calf pairs.

Susan Parks, associate professor of biology, is the senior author of the study, whose findings appear in Animal Conservation (Wiley, 2018).

Parks says the publication is timely, noting the right whales’ declining fertility and rising mortality, exacerbated by a breeding season without any new births—all of which raise concerns about their increased risk of extinction.

“North Atlantic right whales are prone to accidental death or injury from vessels strikes and fishing gear entanglement,” says Parks, who studies the acoustic signaling of marine and terrestrial animals. “On top of this, their calving rates have dropped dramatically since 2010. We must improve the protection measures for these animals or risk their demise.” 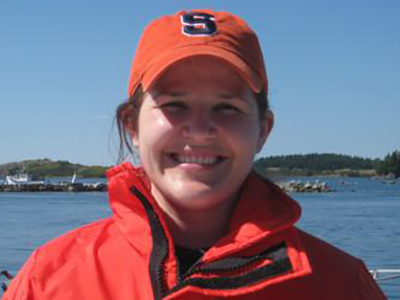 Along with colleagues from A&S and the National Oceanic and Atmospheric Administration (NOAA) in Woods Hole, Massachusetts, Parks studied the behavior of 34 right whale mother-calf pairs in three areas off the coast of United States and Canada. The team collected data from 2011 to 2015, covering the period between birth and weaning.

The team discovered that the near-surface resting behavior of mother-calf pairs dominates the first five months of the calves’ lives.

“These behaviors place the mother-calf pair at increased risk of a ship strike, which may partially explain why the mortality rate [among calves] is high,” says Parks, adding that mariners often have trouble spotting right whales at sea.

She and her colleagues also noticed that, during the calves’ early months, the mother-calf call-rates were extremely low—possibly a defense mechanism against potential enemies or hungry predators. 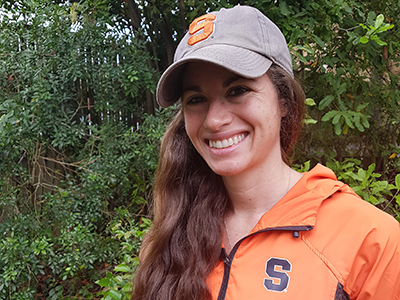 Lead author Dana Cusano was an assistant in the Parks Lab from 2012-16. She says that using traditional acoustic methods to monitor mother-calf pairs on their calving grounds is not feasible with right whales.

“We need visual surveys to keep track of their movements, so we can alert vessels, if we find the whales in a high-traffic area,” adds Cusano, a Ph.D. candidate at The University of Queensland, Australia.

Cusano goes on to say that the risk of entanglement or a vessel strike does not decrease as the mother-calf pair becomes more active with age. “Each habitat raises new vulnerabilities and concerns. Understanding the behavioral ecology of a species is fundamental to effective conservation and management efforts,” she says.