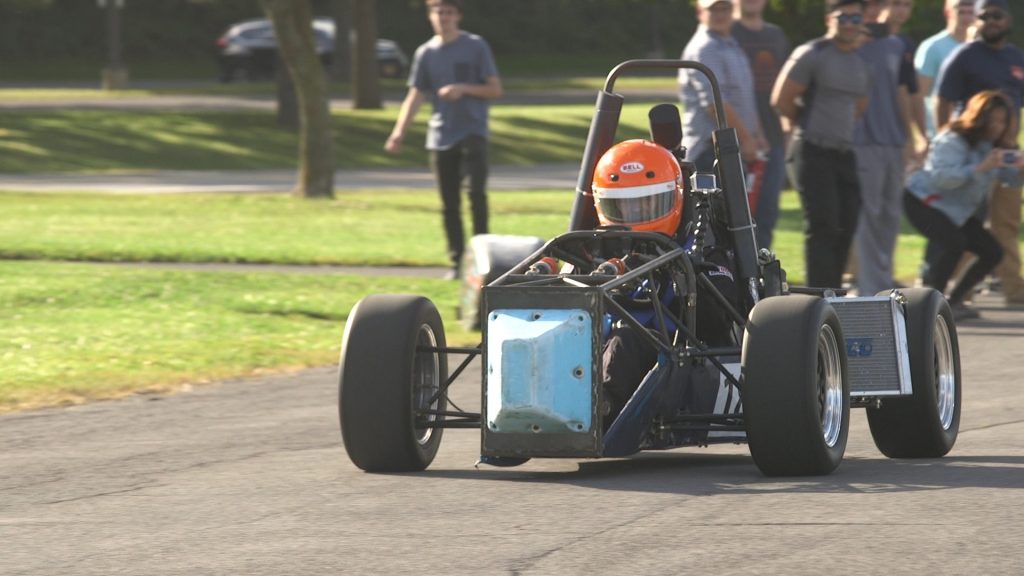 There are hundreds of clubs and organizations on the SU campus, but only one lets you design and build a fully functioning race car.

Citrus Racing recently took its new CR2 car out for a test run as the team prepares for the 2019 Formula SAE Competition in Lincoln, Nebraska.

The team welcomes students from any major who are interested in helping with Citrus Racing. For more information, you can go to their website and apply.

“It’s a lot of engineering—almost everything on the car is built by us the students except for the engine block that we heavily modify,” says Jaymin Shah ’20.

“Once we got to sophomore year, it was our turn to build the car—to be in that position as a sophomore where you are building a car, it is crazy,” says Andrew Hinchman ’20.

“We all split it up as a group so there are different team leaders,” said Shah. “There is the engine team, the driver’s control, drive train, electrical, areo, chasis.”

Safety is always the primary focus for all team members.

“I have to dress up in all this stuff, make sure everything is strapped up the way it is supposed to, throw the helmet on,” says driver Graham Harrington ’19.

“Once it is jumped, it is ready to go. He has his foot on the throttle, clutch engaged and then everybody clears and he’s off,” says Hinchman.

“Today is about as wide open as we have had it so far,” says Harrington.

“You are checking to see how the car is actually going, how it is running, how it is braking, accelerating, the way it is handling around turns,” says Shah.

“I lead the brakes,” says Stephen Bergested ’20. “When we brake that hard it’s part of the competition test. Seeing it be able to lock up all four wheels and stop at such a short distance—that feels amazing. I’m on cloud nine when I see that.”

“It was a great feeling to know everyone worked together and got this to work seamlessly,” says Harrington.