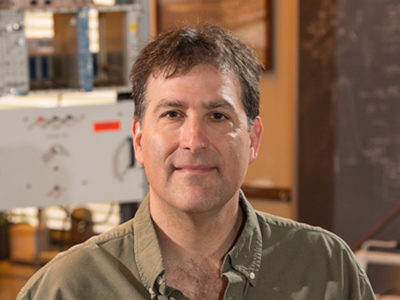 Researchers in the College of Arts and Sciences have determined that the lifetime of the so-called charmed omega—part of a family of subatomic particles called baryons—is nearly four times longer than previously thought.

In an article in Physical Review Letters (American Physical Society, 2018), Steven Blusk, professor of physics, explains that the new measurement is based on proton-proton collision data from the Large Hadron Collider beauty (LHCb) experiment at the CERN physics laboratory in Geneva, Switzerland.

Blusk and his colleagues found that after analyzing collision data from nearly a thousand charmed-omega decays, the particle’s lifetime is 268 femtoseconds. A femtosecond is a millionth of a billionth of a second, or 0.000000000000001 seconds.

“Theoretical predictions about the lifetimes of exotic particles often favor a particular order,” says Blusk, the article’s lead author. “Theories predict that the charmed-omega baryon likely has the lowest lifetime of the bunch. But predictions are made to be tested, right?” 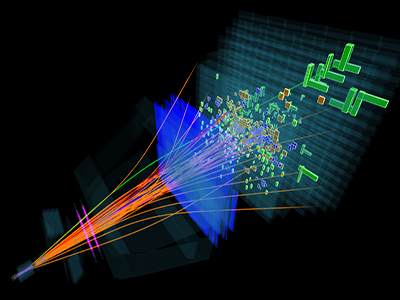 That the lifetime of the charmed omega is not as short as scientists thought it was “substantially jumbles” the lifetime hierarchy of multiple particles. “It also suggests that corrections need to be made to our theoretical predictions,” Blusk adds.

Scientists agree that everything in the universe comes from two groups of elementary particles: quarks and leptons. Unlike leptons, which are solitary in nature (e.g., electrons), quarks combine to form composite particles called hadrons.There are different kinds of hadrons, the most common of which are mesons (containing two quarks) and baryons (with three quarks). These quarks come in six species, or flavors, and have unusual names: up, down, strange, charm, beauty and top.Blusk studies beauty and charmed quarks, which are hundreds of times more massive than their up and down counterparts. It is for this reason that both are considered “heavy.”

“Heavy quarks rapidly change into up and down quarks through particle decay, in which they go from a higher mass state to a lower one,” Blusk continues. “By producing and studying heavy quarks in abundance in high-energy collisions [using particle accelerators], we gain insight into the fundamental forces of nature.”

Enter Syracuse’s High-Energy Physics (HEP) Group, of which Blusk is a member. He and his HEP colleagues split time between Syracuse—where they design, build and test detection hardware—and CERN, where they carry out experiments.

It is at the Large Hadron Collider—the biggest, most powerful particle accelerator in the world—that beams of protons are hurled at one another, close to the speed of light. Blusk and other scientists from around the world comb the ensuing debris for clues to new or yet-to-be-detected forces in the universe.

Blusk says the detritus enables him to not only analyze particle decays, but also measure the lifetimes of charmed mesons and baryons. “It is one example of the many types of measurements that are performed at CERN,” he says.

Such data also helps scientists test models of quantum chromodynamics (QCD), a theory describing the atomic nucleus and particles within it. QCD focuses on quarks and gluons, which are the building blocks of protons and neutrons, which, in turn, form atoms.

The theory also explains how gluons hold quarks together.

“All this information helps us seek a deeper, more complete theory of the universe,” Blusk says.

The lifetime of the charmed omega was last measured nearly two decades ago, but involved much smaller data samples. The average of the values measured by those experiments was approximately 69 femtoseconds—four times lower than Blusk’s value.

None of the measurements, including his, contradicts the range of theoretical estimates of the charmed omega’s lifetime, which spans from 60 to 520 femtoseconds.

Blusk says that, because of the discrepancy, additional measurements need to be made. Moreover, theoreticians are beginning to take a closer look at their QCD calculations and predictions.

“It is quite rare and exciting to find such a long-accepted measurement challenged by a new one. We look forward to this result spurring more precise QCD calculations of various quantities, which, in turn, will improve the theoretical predictions for the lifetimes of charmed baryons,” Blusk adds.