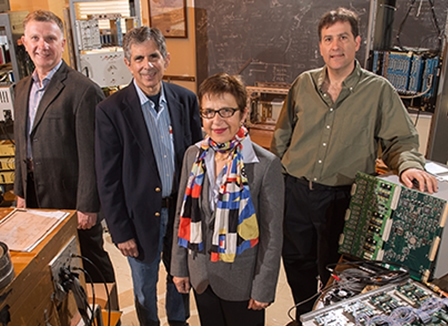 Physicists in the College of Arts and Sciences are closer to understanding what happened after the Big Bang nearly 14 billion years ago, thanks to a grant from the National Science Foundation (NSF).

The High-Energy Physics (HEP) Group in the College of Arts and Sciences (A&S) is the recipient of a three-year, $3.7 million NSF award, supporting ongoing research into the fundamental forces and particles in the universe. The group’s project centers on the physics of heavy quarks.

Whereas light quarks make up protons and neutrons in the nucleus of an atom, heavy quarks form other nuclei and mesons (i.e., particles with two quarks). Heavy quarks are produced in the Large Hadron Collider beauty (LHCb) experiment at the CERN laboratory in Geneva, Switzerland.

Integral to HEP’s work is the Standard Model, a theory describing all matter and forces, except for gravity, in the universe.

“The Standard Model is the starting point for investigations into the building blocks of matter,” says Sheldon Stone, Distinguished Professor of Physics and the project’s principal investigator (PI). “We know that an atom is made up of electrons, which swarm around the nucleus. The nucleus, in turn, contains protons and neutrons, each containing at least three quarks, sometimes more. It is within this microscopic framework that we go from the Standard Model to the realm of ‘new physics.’” 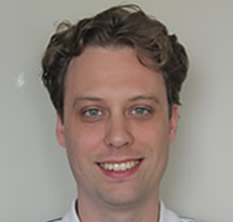 The project’s co-PIs are professors Steven Blusk, Marina Artuso, Matthew Rudolph and Tomasz Skwarnicki. Together with two research professors and a handful of graduate and undergraduate students in A&S, they spearhead one of the nation’s top scientific and hardware programs in particle physics.

According to Stone, the grant will support ongoing physics data analysis at LHCb, as well as the construction and testing of a new tracking device called the Upstream Tracker (UT), located in the experiment’s particle detector.

“LHCb is composed of about 10 different sub-detectors. The UT will significantly enhance the capabilities of this system, above and beyond what it currently does,” he says, adding that the UT will be finished in 2020.

Several times a year, select members of HEP travel to CERN to participate directly in the LHCb experiment. The laboratory is home to the Large Hadron Collider (LHC), the world’s largest, most powerful particle accelerator. Scientists use the LHC to recreate the Big Bang—the first millionth of a second of existence, in which all space, matter and energy in the universe, contained in a point the size of an atom, began to cool and expand.

“The LHC hurls beams of protons at one another at almost the speed of light. The higher the energy, the greater the impact,” says Stone, a Fellow of the American Physical Society. “We examine the debris from these collisions to learn more about the very early universe.”

Unlike other equations, such as Einstein’s elegantly succinct E = mc2, the Standard Model is long and convoluted—rows of equations that seem to make little sense to the uninitiated. In actuality, the theory successfully describes three of the four fundamental forces in the universe: electromagnetism, as well as the weak and strong nuclear forces.

The model, however, is not without challenges. “It says nothing about dark energy and dark matter, which are invisible and make up 96 percent of the universe, and completely leaves out gravity, the weakest of the four fundamental forces,” Stone says. “As a result, we have to look beyond the Standard Model to understand what the universe is made of and how it has come to be.”

Enter HEP, known for its pioneering work with quarks—fundamental constituents of matter that combine to form composite particles called hadrons. Since 2014, the group has turned the field on its ear with discoveries of various hadrons, including two rare pentaquarks (a particle with four quarks and one antiquark), a tetraquark (two quarks and two antiquarks) and two never-before-seen baryons (three quarks).

A unifying characteristic of these discoveries is the presence of a bottom quark, known as a “beauty quark,” or “b quark”—hence the “b” in “LHCb.”

“For every particle, there is a corresponding antiparticle, identical in every way but with an opposite charge,” Stone explains. “When matter and antimatter come into contact, they annihilate one another in a burst of energy. … Theoretically, the Big Bang should have created equal amounts of matter and antimatter. So why is there more matter than antimatter in the universe?”

The answer likely resides at CERN, where the LHC produces different types of quarks. (There are six varieties, or flavors, in all.) Artificially recreating the Big Bang is one thing; sifting through cosmic debris for evidence of heavy particles is another—something requiring sophisticated detectors. “We catch the b quarks when they decay into something else,” Stone says.

Working with colleagues at MIT and the universities of Maryland and Cincinnati, members of HEP are replacing LHCb’s current tracker with the UT. The new device will consist of four ultra-thin, silicon detector planes that produce data “read” by custom-built integrated circuits.

Artuso, who oversees the UT Project with physicists from Poland, Italy and Switzerland, says the hardware will increase the amount of data that LHCb can handle by factors of five to 10. “Improved luminosity will permit more accurate measurements of fundamental particles, and will enable observations of rare processes that occur below the current sensitivity level,” she adds.

As with most NSF grant awards, this one involves public education and outreach. Witness HEP’s involvement with QuarkNet, a research-based teacher professional development program, co-sponsored by the Department of Energy. At Syracuse, QuarkNet takes the form of workshops, lectures and online resources, benefitting high school physics students and teachers.

As one senior physicist puts it: “Syracuse is among the most productive and prestigious collider groups in the country. Their record in the physics of heavy quarks is a brand that is well regarded and prominent.”

Says another, “The PIs are clear intellectual leaders in physics research.”