It was a perfect meeting of tech and design. Industrial and interaction design majors Quinn King ’20 and Alec Gillinder ’20 saw a need for a portable, lightweight device that could deliver intravenous (IV) fluids and spent six weeks designing one as part of the Invent@SU program. Their device, L-IV Liberating Intravenous, attaches an IV to a person’s arm and upper body using just two straps and has an embedded pressure infuser bag. 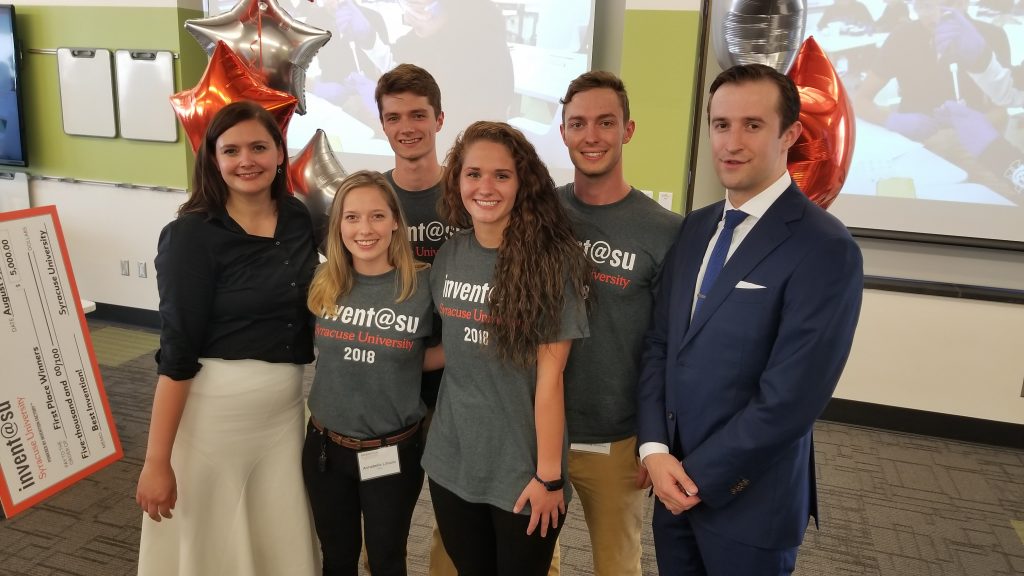 Ten student teams designed, prototyped and pitched their inventions over the course of the Invent@SU program. Before final judging, teams presented to guest evaluators each week to get feedback and suggestions.

“That allowed us to bring the confidence we needed,” says King.

At the end of the program, judges awarded L-IV Liberating Intravenous with a first place and a prize of $5000. King and Gillinder said it was thrilling to know the judges saw real potential in the idea they had been tirelessly working on.

“Everyone giving us feedback was confirmation that we should move forward,” says Gillinder.

Mechanical engineering students Jaclyn Hingre ’19 and Annabelle Lincoln ’20 won second place and $3000 with Halo—a discreet and portable emergency alert system designed for students who need help on or near a college campus. Halo does not require a cellphone or internet service. Their invention uses radio frequencies and small wearable transmitters that allow a student to contact campus public safety if they feel threatened.

“I wanted to design an invention that was going to help people,” says Lincoln.

“When it happened to a friend it had a huge impact on me. Ever since then I thought about a way for students to call for help even if they were off campus. She didn’t have anything,” saysHingre. “Get this on one campus and it will spread to others.”

During the Invent@SU program, students worked with Professor Yevgeniy Yesilevskiy from the College of Engineering and Computer Science and Professors Louise Manfredi and James Fathers from the School Of Design in the College of Visual and Performing Arts. The program is open to all SU undergraduate students and Lincoln said it was helpful to have a mix of different majors and programs in one workspace.

“Everyone supported everyone–it wasn’t cutthroat, it was collaborative.”

Several teams plan to work with the Blackstone Launchpad at Syracuse University to move their inventions forward.

“We weren’t just looking at the end of this competition, everybody put their all into it,” says Gillinder.

Bioengineering student Angelica O’Hara ’19 and biochemistry student Ibnul Rafi ’18 won the New York City session of Invent@SU earlier this summer with Prioritage, a device that monitors vital signs on multiple patients and relays them to a central onsite coordinator.