Back to the Future of Climate Change 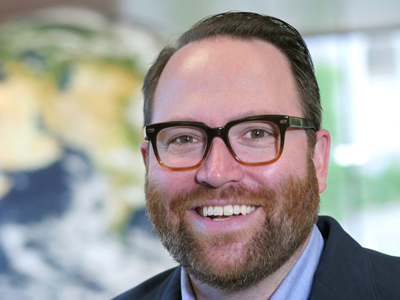 Researchers at Syracuse University are looking to the geologic past to make future projections about climate change.

Christopher K. Junium, assistant professor of Earth sciences in the College of Arts and Sciences (A&S), is the lead author of a study that uses the nitrogen isotopic composition of sediments to understand changes in marine conditions during the Paleocene-Eocene Thermal Maximum (PETM)—a brief period of rapid global warming approximately 56 million years ago.

Junium’s team—which includes Benjamin T. Uveges G’17, a Ph.D. candidate in A&S, and Alexander J. Dickson, a lecturer in geochemistry at Royal Holloway at the University of London—has published an article on the subject in Nature Communications (Springer Nature, 2018). 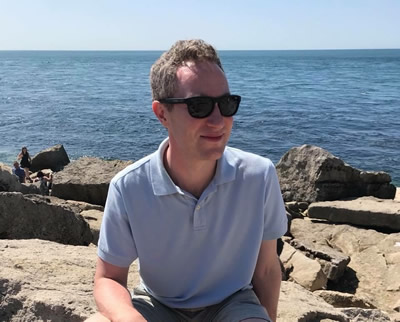 Their research focuses on the ancient Tethys Ocean (site of the present-day Mediterranean Sea) and provides a benchmark for present and future climate and ocean models.

“The nitrogen isotope record demonstrates that oxygen-free [anoxic] conditions initiated rapidly at the onset of the PETM, changing the way important nutrients, such as nitrogen, were recycled,” says Junium, a sedimentary and organic geochemist. “The magnitude of this nitrogen isotopic shift is similar to those observed during rapid warming intervals in the Mesozoic Era [252 million to 66 million years ago], when broad areas of the Tethys and Atlantic oceans became depleted in oxygen, below the surface. 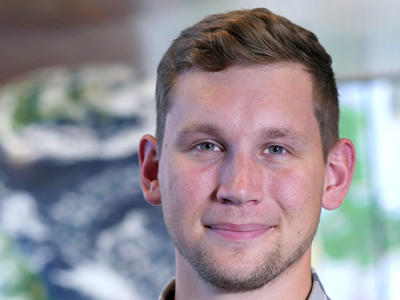 Such depletion, known as deoxygenation, triggered Oceanic Anoxic Events (OAEs) in the Eastern Tethys during the Mesozoic Era. Scientists believe OAEs coincided with rapid changes in the ancient Earth’s climate and ocean circulation—changes marked by an influx of carbon dioxide from periods of intense volcanism.

“While the exact cause of the PETM is an area of active debate, we are certain that potent greenhouse gases, including carbon dioxide and methane, contributed to overall warming,” Junium says.

The fate of the Tethys Ocean and areas surrounding it during the PETM has been the subject of much speculation by paleoclimatologists, notably Dickson, who has written extensively about it. He and Junium are convinced that a panoply of factors—including ocean acidification, intense rainfall and weathering on land, and an influx of nutrients (e.g., nitrogen, phosphorous and sulfur) from river discharge—set the stage for deoxygenation. Similar to what is happening today.

“Coastal marine systems may be more vulnerable to OAE-like conditions than previously thought,” Junium says. “This is particularly so in enclosed basins, such as the Baltic Sea, or near large river systems, including the Mississippi, which are seeing major influences from anthropogenic activity. … The expansion of anoxic waters, particularly during summer months, impacts marine communities, as well as those relying on coastal areas for food sources, commercial fishing or recreation.”

Drawing on data from the ancient Kheu River system in southern Russia, Junium and his colleagues have confirmed that the nitrogen cycle of the Eastern Tethys underwent a “major reorganization” during the PETM. “Pertubations to the nitrogen cycle can have widespread consequences,” says Junium, referring to the process in which nitrogen changes from one form to another, while circulating throughout the atmosphere, the terrestrial and marine ecosystems. “Nitrogen is critical for life on Earth.”

The group’s research goes a step further. Variations in nitrogen isotope data from the Kheu suggest episodes in which anoxic conditions relaxed, causing oxygen to mix into the water column.

“The transition between oxygen-free and low-oxygen conditions in the Tethys Ocean during the PETM may have created conditions that favored increased production of nitrous oxide, a potent greenhouse gas made by microbes at very low oxygen concentrations,” Junium says. “Studying conditions that fostered nitrous oxide production [during the PETM] enables us to calibrate current and future Earth system models. There is more to warming than just increased concentrations of carbon dioxide.”

Nitrous oxide provides an interesting, albeit speculative twist to the group’s research because the gas cannot be measured directly in ancient rock. “I think we can make a case for finding out whether or not conditions during the PETM favored increased production,” Junium says.

Dickson agrees, adding that the mere suggestion of nitrous oxide contributing to global warming during the PETM is “fascinating.”

“Events such as the PETM are some of the best geological analogues we have for a warmer world. And yet, for years, a satisfactory explanation of how the climatic drivers of these ancient events interacted to produce the level of observed warming has eluded climate modelers,” Dickson says. “The suggestion of a nitrous oxide feedback on climate warming adds a new layer of intrigue to this discussion and highlights the role a changing nitrogen cycle might have on our future Earth.”

Junium thinks his team is on the right track. As carbon dioxide concentrations dangerously approach 400 parts per million (levels not experienced in three million years), they are aware that warming will continue to increase. The ecological and societal implications could be huge.

“Indeed, there are gaps in our understanding between the model worlds and the fossil worlds. The past enables us to test and hone models on which future projections are based. It also helps us determine what processes are missing from our current Earth system models,” he says. “These things combined help us understand and prepare for what is on the horizon.

“We live in an increasingly digital environment and our students need to have a specific set of skills to function in society and to succeed in any career,” says Jian Qin, professor and program director of the master of library…

When it comes to choosing a partner, humans tend to be attracted by characteristics like personality and common interests. In contrast, insects tend to be a bit shallow, as they choose a mate based on appearance, and in some cases,…

May 6 is World Password Day, an annual reminder to promote better password habits and digital security. With more of our lives online than ever before, what should people know about passwords to better protect their identity and private information?…