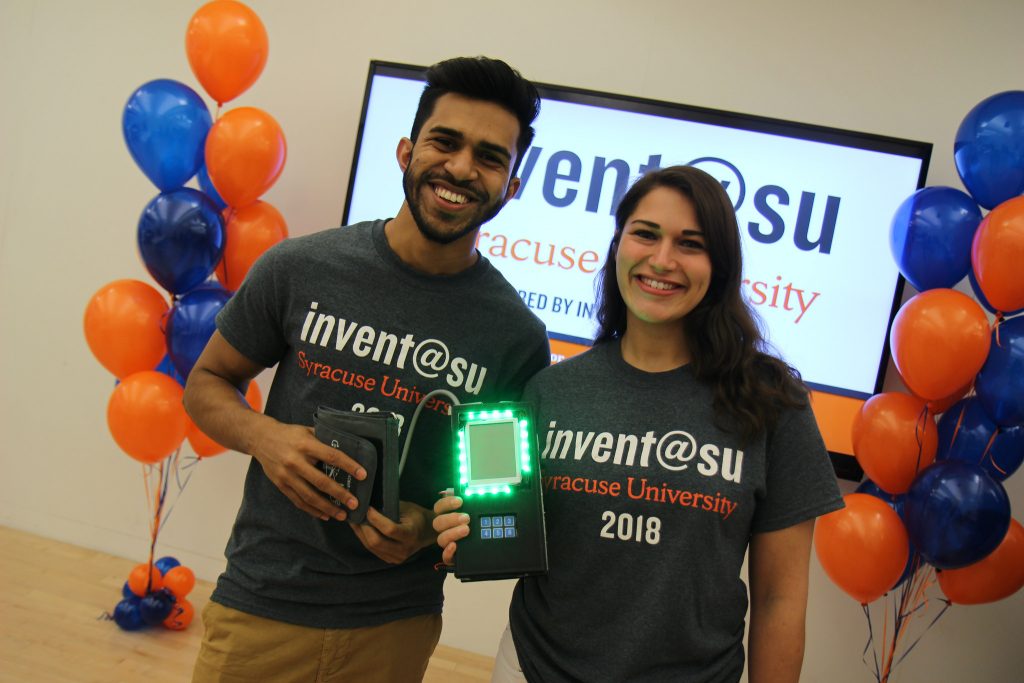 “EMTs are constantly making judgment calls—who should I go to next?” says O’Hara. “There is nothing currently that takes your blood pressure, your heart rate, your oxygen and your respiratory rate all in one device—something that combines all the vital signs.”

During the Invent@SU invention accelerator program in New York City this summer, O’Hara and Rafi developed a system called Prioritage that allows first responders to put armband units on multiple patients to measure vital signs and relay them to a central onsite monitoring device.

“We thought if a command person had a sort of central base to observe everything and give them a better view that could be helpful,” says O’Hara.

O’Hara and Rafi were among 20 SU students participating in the Invent@SU session in SU’s Fisher Center in midtown Manhattan. Over the course of six weeks, they designed, prototyped and pitched new inventions to guest evaluators and judges.

Finance and information technology major Hanna Yacubov and bioengineering major Patrick Riolo took second place with their Artemis Wand invention. It is designed to help people with disabilities reach household items by using Fidlock fasteners on the side of an item and on an extendable wand. They came up with the idea after one of the Invent@SU instructors brought in his child’s bike helmet.

“It had this Fidlock fastening tech and we said—we can use this,” said Riolo.

A significant part of Invent@SU is feedback from accomplished alumni and other professionals. Teams pitch their inventions to guest evaluators each week leading up to final judging.

“We are really passionate about the product so it was easy for us to pitch,” said Yacubov.

Rafi and O’Hara won $5,000 for first place and Yacubov and Riolo won $2,500. Many of the teams plan to continue working on their inventions and work with the Blackstone Launchpad on campus. O’Hara and Rafi say they have already received good feedback on their invention from EMTs.

“I know if I was a victim in an incident like this, I would feel much safer with something there to constantly monitor me, I would feel like the EMT is almost always with me, has eyes over me, doesn’t forget about me after he walks away,” says O’Hara. “A sense of safety and security.”

Another Invent@SU session will be held on the SU campus from July 2 to August 9. Any undergraduate student could apply to join either the New York City or Syracuse sessions.