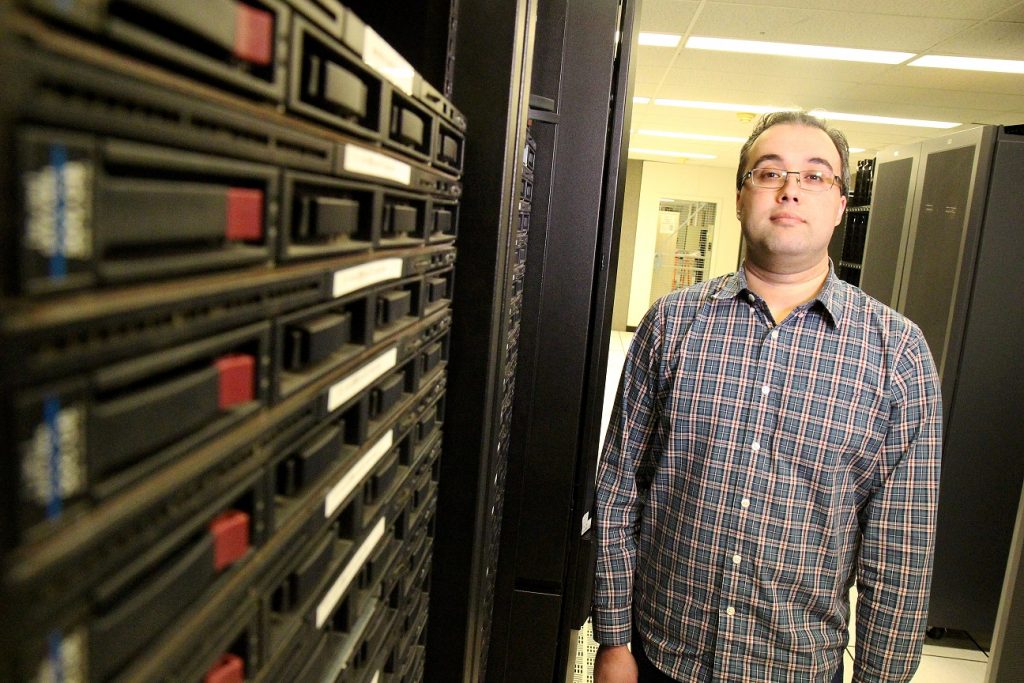 Yahoo Labs has made an initial donation of 120 servers, or about 1,000 cores, that have been installed as part of the University’s Research Computing facilities in Machinery Hall. The donation was secured by Reza Zafarani, assistant professor in the College of Engineering and Computer Science and director of the Data Lab.

The search to answer research questions through vast amounts of data requires massive amounts of computer server space. Syracuse University has a healthy number of data servers ready to assist researchers, but a recent donation by Yahoo is adding more resources to the mix.

Yahoo Labs has made an initial donation of 120 servers, or about 1,000 cores—each server has about eight cores as part of its central processing unit. The servers have been installed as part of the University’s Research Computing facilities in Machinery Hall. Another 3,000 cores is forthcoming.

“Syracuse University’s Research Computing center provides robust resources for high-performance computing, but this donation is a good addition to the clusters we have,” Zafarani says.

Zafarani had previously collaborated with research scientists at Yahoo and learned about its Academic Partnerships program that provides servers to academic researchers.

The servers were shipped to the University in December, and it took a couple of months to set them up, but they are now operational as part of the Research Computing services.

Zafarani recognized the work of members of the University’s Research Computing team; Eric Sedore, associate CIO for infrastructure services; and Doug Hague, Data Center manager, who set up the units and integrated them with the campus network infrastructure. “These servers consume a lot of power so they have to make sure they have enough,” Zafarani says.

This donation will assist Zafarani—and the work of his lab—in his research looking at large-scale networks and social media sites. Zafarani’s students, mainly Ph.D. students, in the Data Lab are also doing research in this area and regularly use the cluster.

“Most of what I do is look at networks with maybe billions of users and sometimes we have to count or predict things really quickly within these networks to measure specific patterns,” Zafarani says.

For example, if they are looking to determine if a rumor is being spread on a social network, researchers will have to look at a lot of users in real time to see how that piece of information is propagating.

“Basically I do a lot of data collection from social media networks and social media sites and the web, and in general utilize large-scale data sets,” Zafarani says. “I measure things in it, I predict things in it and I model things in it. All of this requires large-scale computing facilities and this helps with that.”

They may look at how the network looks like with different categories of people—maybe for a specific malicious group or people connected through a specific activity.

Recently, Zafarani’s team looked at how sentiments propagate on social networks. For example, previous smaller-scale psychology and sociology studies say that if you have friends who are happy that may make you happier. Using large-scale networks, Zafarani’s team looked at how these smaller-type studies with smaller groups might be verified using large networks of people.

“We look at a very large-scale network of people, basically one to two million people, with about 25-30 million friendships, and then we looked at sentiments expressed by them over 10 years,” he says.

Researchers can look at specific questions, such as predicting if someone is happy or sad by their network of friends. “We can see the way people become friends with each other,” he says. “The network structure of friendship tells a lot about their emotions.”

The research into greater human understanding involves both engineering and the social sciences.

“In terms of algorithms, analysis and methods, it’s engineering. In terms of how it’s applied, it’s interdisciplinary,” Zafarani says.