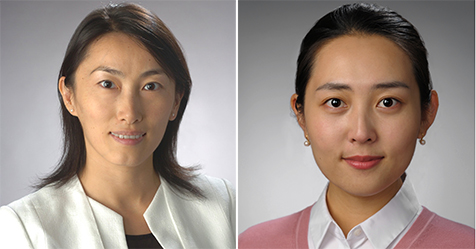 Huang and Wu were named winners of the Lee Dirks Best Paper Award, considered the highest honor at the annual conference, for their paper “Understanding Interactions Between Municipal Police Departments and the Public on Twitter.”

The award comes with a cash prize of $5,000 provided by Microsoft, and honors the memory of Lee Dirks of Microsoft Research. Susan Dumais from Microsoft presented the award at the conference’s opening plenary session. Dirks was a long-time friend and supporter of the iConference and the information field.

The paper examines nearly 10,000 Tweets collected from 16 municipal police department official Twitter accounts in 2015 and annotates them into different strategies and topics. Huang and Wu then further examined the association between Tweet features—such as hashtags, mentions, and content—and user interactions by using regression models. The models revealed some surprising findings, such as the number of mentions having a negative correlation with Tweets being marked as favorites.

“We hope that our findings will provide insights into how to improve interactions between law enforcement and the community,” says Huang. “As law enforcement agencies use social media for building community policing, both researchers and practitioners need to understand how the two parties interact on social media on a daily basis, so that effective strategies or tools can be developed for the agencies to better leverage the platform to fulfill their missions.”

Wu is a second-year Ph.D. student at the iSchool with research interests in human-computer interaction, social media, crowdsourcing and data mining. Her studies aim to identify different stakeholders and impact factors to verify the accessibility of systems in different crowdsourcing contexts.

The iConference is hosted by the iSchools Organization, a collective of over 90 information schools around the globe dedicated to advancing the information field. The iSchool at Syracuse University is a founding member of the organization, which has been hosting the annual event since 2005. This is the second Lee Dirks Award for a Syracuse researcher. In 2013, the first year of the awards, Nathan Prestopnik, then a Ph.D. student at the iSchool, was recognized. Prestopnik is now an assistant professor in the computer science department at Ithaca College.