Voices from the Deep 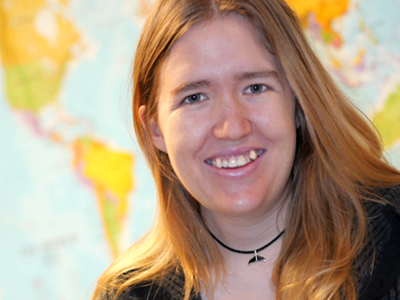 Holly Root-Gutteridge has always been a good listener–a trait that has served her very well in her bioacoustics research of mammals, both aquatic and landlocked. Most recently her ears have tuned-in to the vocal stylings of the North Atlantic right whale, one of the most endangered species of whales on earth.

Root-Gutteridge’s newest investigation “A lifetime of changing calls: North Atlantic right whales, Eubalaena Glacialis, refine call production as they age,” a collaborative research project with researchers from Syracuse University, Cornell University, Duke University and the National Oceanic and Atmospheric Administration (NOAA) Northeast fisheries office, was recently published in the March edition of the journal Animal Behaviour. The paper is based on work that was done while she was a researcher in the lab of Associate Professor Susan Parks.

Through extensive listening and analysis of whale calls—which were recorded by a large collaboration of scientists over the past two decades—she was able to pick up the slow gradual changes in sound production in the marine giants as they age. By careful analysis of the sounds, the research team could see the progression of vocal characteristics of the animals as they matured from young calves to adulthood.

The whales produced clearer, longer calls with age, a trend that did not end when they reached physical maturity, but continued to improve through time, even in adults.

“We’re learning that these right whales have control of their voices,” explains the researcher. “That means they may be sending more complex information than we previously thought.” 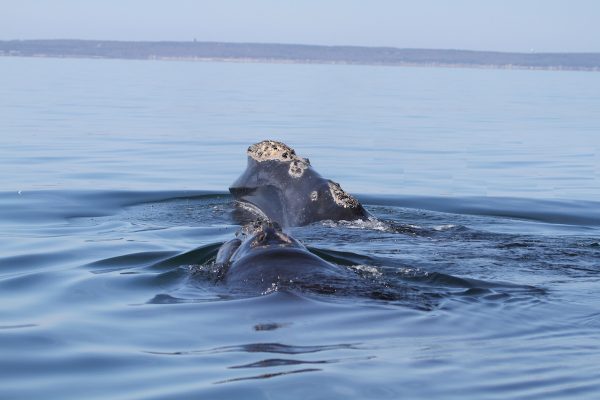 Through continued study, Root-Gutteridge believes that scientists will be able to better understand how whales communicate in the wild, which can lead to stronger worldwide conservation efforts of these endangered mammals.

While still at Syracuse, Root-Gutteridge turned heads around the world with her wolf dialect research back in 2016. Contrasting the recordings of over 2,000 howls from 13 different species and subspecies of wolves, the biologist discovered that wolves, much like people, have regional vocalization patterns, or dialects, depending on their locale.

“I learned a lot at Syracuse as I’d never studied marine mammals before. I know a lot more about whales and their songs and have developed some great skills in analyzing animal sound,” says Root-Gutteridge. “I also have a much better understanding of how tough it is to study marine mammals as their home ranges are just so big. When I studied wolves, I thought 25 square miles was a lot of territory to cover, but the whales swim all the way up and down the East Coast!”

Since finishing at Syracuse, her work has literally gone to the dogs. Root-Gutteridge is currently at the University of Sussex in the United Kingdom where her next bioacoustics project, “How Dogs Hear Us: Human speech perception by domestic dogs,” explores what animals of the canine persuasion hear when humans speak.