The University Lectures series welcomes aerial robotics expert Vijay Kumar, the the Nemirovsky Family Dean of Penn Engineering at the University of Pennsylvania, on Tuesday, Feb. 20, at 7:30 p.m. in Hendricks Chapel. 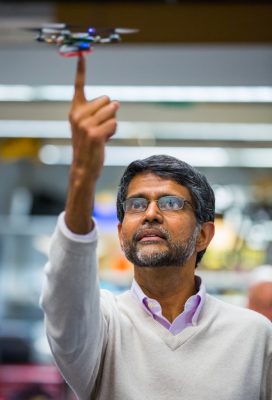 His appearance is free and open to the public. The lecture is co-sponsored by the College of Engineering and Computer Science, with media sponsor WAER. American Sign Language (ASL) interpretation and Communication Access Realtime Translation (CART) are available. Requests for accessibility and accommodations may be made to the Equal Opportunity, Inclusion and Resolution Services (EOIRS) office at 315.443.4018.

Kumar is recognized around the world for his groundbreaking work on the development of autonomous ground and aerial robots, on designing biologically inspired algorithms for collective behavior and on robot swarms.

In his 2015 TED Talk, “The future of flying robots,” he describes his team’s Precision Farming project, in which swarms of robots map, reconstruct and analyze every plant and piece of fruit in an orchard, providing vital information to farmers that can help improve yields and make water management smarter.

In an earlier TED Talk, from 2012, “Robots that fly … and cooperate,” he concludes his presentation with a recorded demonstration of nine flying robots performing the James Bond theme on six different instruments. Kumar is a huge James Bond fan, and he credits the character “Q” for motivating him to pursue a career in technology. This particular video has had more than 4.36 million viewings.

Kumar was named dean of the University of Pennsylvania School of Engineering and Applied Science in 2015. He joined the Penn Engineering faculty in 1987 and prior to his current position served as UPS Foundation Professor with appointments in the departments of mechanical engineering and applied mechanics, computer and information science and electrical and systems engineering. As deputy dean for education in 2008-12, he was instrumental in the creation of several innovative master’s degree programs.

Earlier, he served as chair of the Department of Mechanical Engineering and Applied Mechanics (2005-08), deputy dean for research (2000-04) and director of the General Robotics, Automation, Sensing and Perception, or GRASP, Laboratory, a multidisciplinary robotics and perception lab (1998-2004). During a scholarly leave in 2012-14, he served in the White House as assistant director for robotics and cyber physical systems in the Office of Science and Technology Policy.

Kumar has authored more than 400 refereed articles and papers and more than 20 books and book chapters.

He is a member of the National Academy of Engineering and a fellow of the American Society of Mechanical Engineers and of the Institute of Electrical and Electronic Engineers.