A chemist in the College of Arts and Sciences (A&S) has figured out how to control glucose levels in the bloodstream without the usual side effects of nausea, vomiting or malaise. 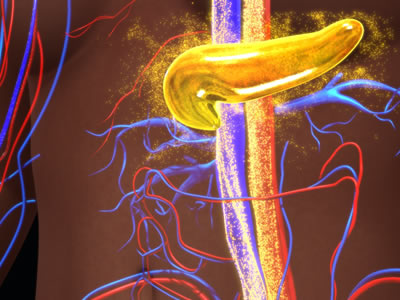 A 3D illustration of the pancreas secreting insulin (sciencepics/Shutterstock.com)

Robert Doyle, the Laura J. and L. Douglas Meredith Professor of Teaching Excellence and professor of chemistry, is the inventor of a new compound that triggers the secretion of insulin in the pancreas without associated nausea. Working with colleagues at the University of Pennsylvania (Penn), the Seattle Children’s Hospital and SUNY Upstate Medical University, he has designed a conjugate of vitamin B12 that is bound to an FDA-approved drug known as Ex4.

Doyle expects his compound, called B12-Ex4, to offer a broader scope of available treatment options for diabetes because of its ability to improve glucose tolerance without the associated side effects.

His findings are part of a groundbreaking paper he has co-authored in Diabetes, Obesity and Metabolism(John Wiley & Sons, 2018). A related paper of his addressing glucoregulation and appetite suppression is scheduled to run in Scientific Reports (Nature Publishing Group, 2018).

“This represents an interesting new paradigm for the treatment of Type 2 diabetes, using so-called GLP1-R agonist drugs, which make up a multi-billion dollar industry,” says Doyle, also an associate professor of medicine at SUNY Upstate. “Our findings highlight the potential clinical utility of B12-Ex4 conjugates as therapeutics to treat Type 2 diabetes, with reduced incidence of adverse effects.”

Type 2 diabetes is marked by increased levels of glucose in the blood or urine, when the body is unable to use or produce enough insulin. Long-term complications include eye, kidney or nerve damage; heart attack or stroke; or problems with the wound-healing process.

Doyle’s discovery stems from his work with exenatide, a drug that causes the pancreas to secrete insulin when glucose levels are high. (Insulin is a hormone that moves glucose from the blood to various cells and tissues, where the sugar turns into energy.) Used to treat Type 2 diabetes, exenatide is part of a large class of medications called incretin mimetics. These injectable drugs bind to glucagon-like peptide receptors (GLP1-R) to stimulate the release of insulin.

A drawback of exenatide is that GLP1-R is found in the pancreas and brain. Stimulating the receptor in the pancreas leads to positive aspects of glucose control, but doing so in the hypothalamus (the part of the brain coordinating the nervous system and pituitary gland) causes malaise and nausea.

“We were able to mitigate the side effects of exenatide by preventing it from entering the brain, while allowing it to penetrate other areas of the body, such as the pancreas,” says Doyle, whose research focuses on the chemistry of B12, exploiting its properties and dietary pathway for drug delivery. “Our ability to ‘fix’ Ex-4 as a proof of concept could impact obesity and cancer treatment, since we can use our drug system to prevent or modulate central nervous system [CNS]-mediated side effects. In the case of Ex-4, this [side effect] was chronic nausea.” 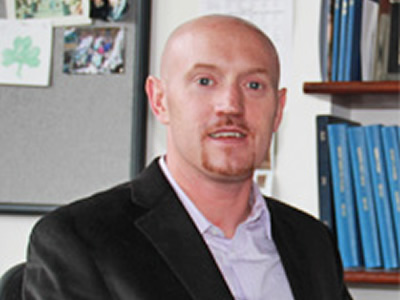 Critical to Doyle’s research are GLP-1R agonists—synthetic, peptide-based chemicals that bind to organs or cells, causing them to produce a biological response. These peptide conjugates of insulin are the only known hormones able to decrease blood-sugar levels by enhancing the secretion of insulin. They do this by reducing food intake and body weight.

Doyle says these drugs are effective for treating obesity, but many Type 2 diabetics are not obese or overweight: “In fact, they should avoid losing weight altogether.”

Add to that the prevalence of nausea or vomiting, and the chances of skipping doses or discontinuing treatment increase considerably. “These adverse effects are surprisingly under-investigated, and they limit the full, widespread use and efficacy of GLP-1R agonists for the treatment of metabolic disease,” he continues.

In response to critical need, Doyle’s lab has spearheaded the development of a next-generation incretin therapeutic that controls blood sugar without causing a reduction in food intake or change in eating behavior. “This method of conjugation is ideal for the future treatment of Type 2 diabetes,” says Doyle, adding that Syracuse University owns the patent on this work. “It also may be broadly beneficial to other therapeutics that would benefit from reduced CNS penetrance.”

Doyle collaborated with Matthew Hayes, associate professor of neuroscience in the Department of Psychiatry in Penn’s Perelman School of Medicine, in the project’s experimental design and execution.

Since joining Syracuse’s faculty in 2005, Doyle has become a rising star in medicinal chemistry. His broad background in synthetic chemistry, drug delivery and protein biochemistry underscores his cross-cutting research, which has received support from multiple sources, including the National Institutes of Health, the American Chemical Society, the Serum Foundation and various industry partners.

For the first time in Syracuse University’s history, a department has received a prestigious S10 Instrumentation Grant from the National Institutes of Health. The S10 program, which supports the purchase of high-tech instruments to enhance research of NIH investigators, funded…

Crude oil production and natural gas withdrawals in the United States have lessened the country’s dependence on foreign oil and provided financial relief to U.S. consumers, but have also raised longstanding concerns about environmental damage, such as groundwater contamination. A…