George M. Langford is famously soft-spoken, but do not expect the dean emeritus of the College of Arts and Sciences (A&S) to slip quietly into retirement. On the contrary, he is about to make the biggest noise of his career. 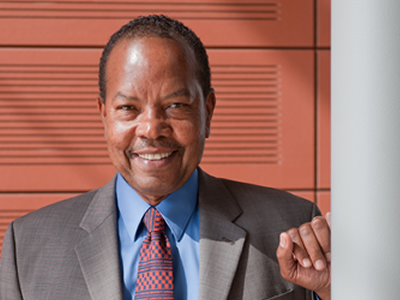 In November, Langford encamped at the Janelia Research Campus, the Howard Hughes Medical Institute (HHMI)’s pioneering research center in Ashburn, Virginia. For two weeks, he and his postdoc worked around the clock in Janelia’s Advanced Imaging Center (AIC) studying pancreatic beta cells, which store and release hormones such as insulin.

The trip probably will not bear fruit until later this year, after they analyze their data, but Langford is optimistic about the results. By understanding how the pancreas produces insulin to regulate blood sugar (i.e., glucose), he hopes to get closer to curing diabetes.

“The whole point of going to Janelia was to observe the cytoskeleton of a living cell while it secretes insulin,” Langford says. “It just isn’t possible to do this with a commercially available microscope. Janelia has developed a fast, super-resolution instrument that detects structures well beyond the resolution, or diffraction limit, of a conventional light microscope. It’s a game-changer.”

Langford is referring to Janelia’s much-ballyhooed TIRF-SIM microscope, the only one of its kind in the country available to scientists. “TIRF-SIM” is short for “total internal reflection fluorescence-structured illumination microscopy,” a burgeoning technical field whose 3D visualizations of molecular processes beyond the conventional resolution limit is revolutionizing chemical and biomedical science.

Gaining access to HHMI’s vaunted instrument is difficult, and entails a highly competitive, peer-review application process. Langford is among a rarefied few who have used the TIRF-SIM twice in the past year.

“The real work begins when I come back to Syracuse,” he says, adding that each trip to Janelia yields about six months of quantitative analysis. “Fortunately, Syracuse has very good students who can assist with this process, in addition to excellent macro-computing facilities. Each data-set contains thousands of images, and every [image] has to be carefully analyzed.”

To appreciate Langford’s work is to understand how the body regulates glucose, which comes mainly from food and is a major source of energy in cells. Insulin controls how much glucose travels through the bloodstream at any given time. Too much glucose (a condition known as hyperglycemia) indicates the body is not making or using enough insulin. Symptoms range from clumsiness and confusion to seizures and death.

There are different types of diabetes, of which Type 2 is the most common. (More than 28 million people in the United States have it.) This form of diabetes occurs when the body becomes insulin-resistant, and cannot make enough insulin to overcome the resistance. The risk of Type 2 usually increases with age. 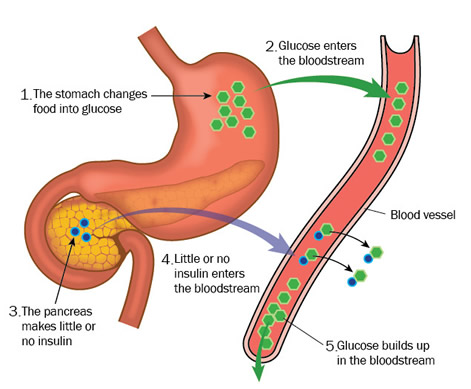 Insulin and the pancreas in the role of glucose metabolism, showing the effects of diabetes. (Blamb/Shutterstock)

“When glucose builds up in the blood instead of going into cells, damage can occur in the eyes and kidneys and other parts of the body,” says Langford, who doubles as a Distinguished Professor of Neuroscience and professor of biology. “The whole process [of insulin secretion] depends on the actin cytoskeleton, a network of filaments comprising the structural elements of a cell.”

Researchers have traditionally thought that these filaments—fine, threadlike strands of protein—act as a barrier between the interior of the cell and the outside environment, controlling the passage of nutrients and waste. When glucose increases, the filaments in insulin-secreting cells seem to decompose or disappear altogether. This triggers the release of insulin by granules in the pancreatic beta cells.

Langford takes issue with this approach because he thinks microfilaments facilitate, not hinder, insulin secretion. “Instead of having a passive role as a barrier, the filaments transport insulin granules to the site of secretion. Now we just need some data to support our hypothesis,” he says.

Under a classical microscope, a microfilament is nothing more than a blur—a bright structure that appears to vanish during insulin secretion. The TIRF-SIM microscope, with its enhanced resolution, confirms that these filaments do not change in number, but wax and wane in size. Stimulate a cell with glucose, and filaments temporarily recede.

Langford believes he has found a magic bullet for filamentary manipulation. “I saw some structures last June, while using the super-resolution microscope at Janelia, that had not been observed before,” he confides. “I can’t say anything about them, other than they might be able to control the shrinking and growing of filaments. This could help us understand how insulin is secreted, and how blood glucose levels are regulated.”

As director of the AIC, which creates imaging methods and instruments before they are commercially available, Teng-Leong Chew considers the center an “ideal platform” for researchers such as Langford to test out novel ideas with emerging microscopy technologies. Chew, a researcher in actin biology, describes the structures in question as “transient centers for actin polymerization,” referring to the process in which proteins that make up microfilaments combine to form larger molecules.

Sharing Langford’s excitement in this discovery, he adds: “George’s proposal was twice accepted by the AIC. He has come here to leverage the high-speed TIRF-SIM to complete his study of this curious biological event. This newly discovered process is very dynamic, and the actin polymerization centers move so quickly that the AIC has developed customized analysis software to help track their movement and polymerization rate.”

The implications for Langford’s discovery are huge—not only for diabetics, but also for sufferers of neurodegenerative diseases, including Amyotrophic lateral sclerosis (ALS), Parkinson’s, Alzheimer’s and Huntington’s. That metabolism and neurodegeneration are inextricably linked with one another makes Langford’s work even more salient.

“We know glucose is the main source of fuel for the human brain,” he says. “We also know the function of insulin-producing beta cells declines [with age] at about one percent per year. It is imperative we figure out how to maintain glucose levels, especially in older individuals.”

Langford’s persistence is paying off. No sooner had he unpacked his bags from his latest trip to Janelia than he was bound for Philadelphia, where the American Society for Cell Biology (ASCB) elected him a Society Fellow at its annual meeting. A new addition to the ASCB Council, Langford has served as the society’s secretary, a member of its executive committee and the inaugural chair of the Minorities Affairs Committee. He considers the fellowship one of the highlights of his half-century career.

“It is recognition by your peers for not only meritorious research, but also a commitment to promoting the field worldwide,” says Langford, who joined ASCB in 1972. “Many Society Fellows also are successful teachers and science advocates. It is an honor to be counted among them.”

Erika Shugart, ACSB’s chief executive officer, says Langford is deserving of the honor. “He was recognized because his career combines significant contributions to cell biology with dedicated service to the society,” she says, singling out his involvement with the Minorities Affairs Committee, which champions underrepresented minorities in cell biology. “The fellows program is a new, significant recognition for ASCB members [such as him].”

The idea of service—working for the betterment of one’s university and profession, as well as the public at large—permeates everything Langford does. Case in point: He is a staunch advocate of Inclusive Excellence (IE), a new initiative promoting the inclusion, persistence and development of all science students. Langford is the driving force behind a recent grant proposal to HHMI, in conjunction with the Association of American Colleges and Universities, which aims to re-envision undergraduate science education at Syracuse.

Langford’s proposal is three-fold: to engage large cohorts of students in authentic research, to provide professional development opportunities for biology and chemistry faculty wanting to implement active-learning strategies, and to establish approaches and practices that broaden the participation of undergraduates from all backgrounds. 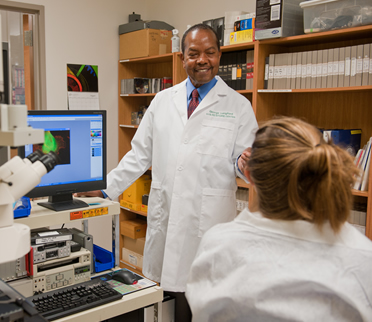 Langford is a proponent of Inclusive Education, which is changing the way undergraduate science is taught and studied.

“It is time to move away from the traditional lecture format,” says Langford, citing recent IE successes at the universities of Colorado Boulder and British Columbia. “It is important to get students doing authentic research—collecting data, getting articles published—rather than cookie-cutter experiments.”

With more than 30 years’ administrative experience, Langford understands the emotional and financial toll of institutional capacity change. Which is why he thinks universities such as Syracuse need to provide incentives for faculty to comply.

“Professors are really busy, so it is hard for them to invest time in these new teaching techniques,” Langford points out. “Secondly, people do what they’re good at. Many professors have perfected the traditional lecture technique, and it is comfortable for them. Why change?”

A popular idea is to provide sabbaticals or paid leave, so faculty can redesign their curricula. Already, there is a groundswell of interest among the University’s junior faculty, many of whom have encountered IE during their graduate and postdoctoral training. “Junior faculty want to be really good at teaching, so I think we’ll have an easier time getting them on board,” notes Langford.

Whether studying pancreatic beta cells (which function similarly to nerve cells) or developing a comprehensive strategy to provide students with an authentic research experience, Langford uses science to make a difference. It is a noble calling, but not without challenges.

“I’ve been doing this a long time, and have seen lots of changes, some not for the better,” he says, alluding to President Trump’s proposed budget cuts in science research. “I have a duty to future generations. My work should speak for itself.”