Emily Mahana ’18 had never entered a major pageant, but the senior civil and environmental engineering major from Cicero, New York, had always enjoyed watching them on television. 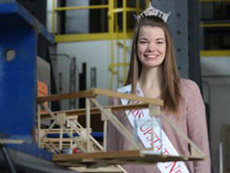 “It’s my senior year, why not do something crazy?” thought Mahana.

She reached out to the Miss Upstate New York pageant organizers and decided to enter—but only had three weeks to get ready.

“I didn’t really start prepping for this pageant until finals were over. I wanted to put my schoolwork first and make sure I did well on exams,” says Mahana. “Once finals were over, I started learning how to walk and pose in the pageant sense. Something I had no experience with before.”

On Jan. 6, Mahana was wearing an expensive dress and ready to take the stage in Corning.

“For me, it was a strange sense of adrenaline and fear at the same time because I was excited to go out there, but being my first one I was so nervous and scared I was going to make a fool of myself,” says Mahana.

Mahana believes her engineering background helped her stay focused during each stage of the competition.

“I think having that mindset of planning beforehand definitely helped me keep everything organized so that after one event was done, I wasn’t scurrying around backstage trying to find my things.”

When her name was called out as the pageant winner, Mahana heard her mother cheering in the audience and started laughing.

“Neither of us knew what to do—none of us expected it.”

Mahana is now preparing for the Miss New York competition that will be held in Buffalo this June. The winner advances to the Miss America pageant. As Miss Upstate New York, she hopes to be an advocate for young women in STEM fields.

“I’d love to go out in my community, go back to my middle school and elementary school,” says Mahana. “I feel like when I was that age in those programs we never had the opportunities to meet with college students to learn about what we could do.”

As she considers graduate school or a joining an engineering firm, Mahana is happy to dispel engineering stereotypes.

“When you think of an engineer, you might not think of a 21-year-old pageant queen, and I agree, that is not your stereotypical engineer, but I think it is important to make sure people start thinking about it that way,” says Mahana. “We are not just in the library studying every day. A lot of my friends are on athletic teams, they run their own clubs or they are part of student government. I think it is important to showcase that we are well-rounded people.”