Britton Plourde, professor in the Department of Physics in the College of Arts and Sciences, has received a new grant from the National Science Foundation to work on developing tools for building a quantum computer. This is a collaborative project with a group in the Physics Department at the University of Wisconsin, Madison. 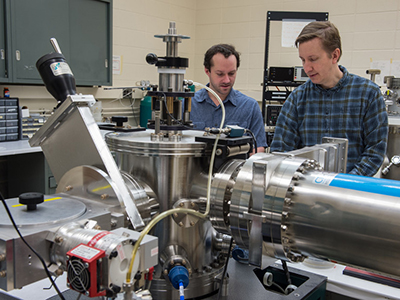 Britton Plourde, right, works with JJ Nelson, a postdoc in his research group, on the vacuum sputter deposition tool in his research lab that is used for growing thin films of superconducting metals.

“One of the remarkable recent discoveries in information science is that quantum mechanics can lead to efficient solutions for problems that are intractable on conventional classical computers,” Plourde says. “While there has been tremendous recent progress in the realization of small-scale quantum circuits comprising several quantum bits (‘qubits’), research indicates that a fault-tolerant quantum computer that exceeds what is possible on existing classical machines will require a network of thousands or millions of qubits, far beyond current capabilities.”

A Syracuse faculty member since 2005, Plourde has been awarded multiple grants from the National Science Foundation, Army Research Office, DARPA and IARPA. He also is the recipient of an NSF CAREER Award and an IBM Faculty Award. Plourde earned a Ph.D. in physics from the University of Illinois at Urbana-Champaign, and is editor-in-chief of the journal Transactions on Applied Superconductivity, published by the Institute of Electrical and Electronics Engineers.

He answered a few questions about his research.