The Large Hadron Collider, located on the border of France and Switzerland, is known for its powerful ability to sling particles near the speed of light. Here at Syracuse University, Scott Ely, Ph.D. candidate in the Department of Physics in the College of Arts and Sciences, is gaining a reputation for slinging scientific concepts almost as fast. 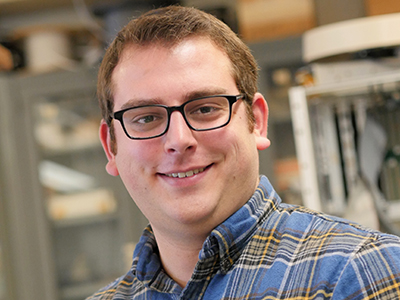 Ely was recently honored at the U.S. Large Hadron Collider Users (US LHC) Association Meeting this past fall for his winning “Lightning Round” talk. During the US LHC meeting, young scientists are given the opportunity to discuss their research in several quick-fire sessions. The presentations, which must be under 10 minutes, cover a wide range of topics, from physics analyses to computational developments and hardware improvements. When the smoke cleared, Ely was named among the top presenters at the international conference.

Having been intimately involved in the development of specialized silicon sensors for a new tracking sub-detector that will be installed in the LHC Beauty experiment next year, Ely was uniquely equipped to succinctly discuss this area of research in progress at the European Organization for Nuclear Research, or CERN.

The Large Hadron Collider is a powerful particle accelerator used to study the fundamental particles of matter. Using 17 miles of tunnels and a series of formidable magnets, the machine creates super-speed, particle-sized collisions, allowing physicists to gather more clues about the properties and forces that impact matter—and leading to even bigger questions, such as how the universe was formed.

Ely earned his undergraduate degree in applied physics from the University of California, Santa Cruz, prior to his arrival at Syracuse. The San Francisco Bay area native hopes to defend his doctoral dissertation in experimental high energy physics in 2019.

A&S News caught up with Ely prior to winter break to learn more about his research and his reaction to being recognized at the conference.